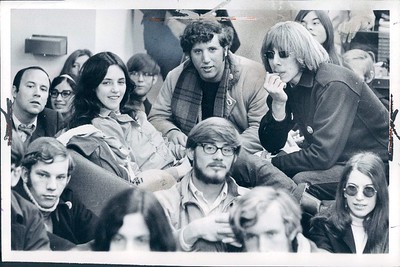 SDS protest: University of Michigan students sit-in at Administration Building, November 5, 1968. SDS had called for a national student strike to protest the war in Vietnam. Photo by Wyston via flickr

‘’The smart way to keep people passive and obedient is to strictly limit the spectrum of acceptable opinion, but allow very lively debate within that spectrum – even encourage the more critical and dissident views. That gives people the sense that there’s free thinking going on, while all the time the presuppositions of the system are being reinforced by the limits put on the range of the debate.’’

Across the world, it has always been a common trait of despotic forces to suppress voices which question, challenge and retaliate against their government’s divisive and authoritarian actions. And, throughout history, students have been the prime target of these oppressive forces as student voice has always been a vital source for building, shaping and reforming social, political, economic, and cultural institutions.

At this age, globally, we are witnessing authoritarian forces in power trying to silence those who dare to speak up. The mainstream media in most parts has become part of that political mould- mostly serving those in power and not questioning them or bringing them to account.

It has, therefore, become a desideratum to support those who speak up for the truth to protect the universal values of democracy.

Which is why in The Bubble, we try to provide students the platform to have their say and give them the utmost freedom to express themselves through their work of art, literature and through political discourse. It is our main principle to maintain an atmosphere of free speech and progressive thought.

This week, I wrote an article about how just like Hillary Clinton, sentaor Elizabeth Warren has a history of dishonesty, flip-flops and political opportunism.

Is Elizabeth Warren as flawed as Hillary Clinton?

Below are all the articles which have been chosen for this week’s editor’s pick.

Should we “lump” all black artists together during Black History Month?

At Least We’ll Have Hot Summers…

Review: Lion Theatre Company’s ‘If We Got Some More Cocaine’

Here is a link to Phil Ochs’s song shedding some light on so-called liberals.