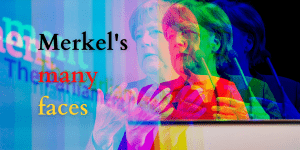 When Donald Trump ascended to the White House in early 2017, the repercussions for the west were as of yet unclear. His defeated rival, Hillary Clinton, was the candidate of orthodoxy; the status-quo figure, whose temperament echoed that of her would-be predecessor Barack Obama, was expected to reaffirm a dedication to multilateralism that had become characteristic of his presidency. As early as 2015, the western bloc continually hoped—erroneously so—that the moderately popular influence of President Obama would animate support for the Clinton campaign. So followed the expectation that Nato, alongside the liberal international order at large, would be the subject of unwavering backing—at least in public—from a newly elected US president. Instead, what succeeded on January 20, 2017, was a rude awakening:

“We will seek friendship and goodwill with the nations of the world, but we do so with the understanding that it is the right of all nations to put their own interests first.”

In truth, the inaugural speech of Trump confirmed what some world leaders had always feared in private: that a more egocentric United States, one less inclined to explicitly reiterate the merits of western cooperation, would come to be. Indeed, the nuanced messaging of Obama was immediately rebuked by his successor; the emphasis on nation-centric interests, one presupposed by the Trump/Pence election platform, aggressively discarded the discursive moderacy of the previous eight years. In Germany, one leader expressed particular concern.

Dubbed as “Mutti” for her assertive motherly attitude, Angela Merkel was widely seen as the matriarch of Europe, rapidly becoming a protagonist in fighting both the 2008 economic crash and the 2015 European refugee crisis. Any resultant derision from these catastrophes, it was feared, could irreversibly damage the long-term fabric of the European project. In presiding over the largest economy of the EU, then, Merkel was a figure of stability that it could ill afford to lose. However, faced with the task of holiding together a creaking world polity, the German chancellor appeared to be far less convivial—perhaps even unconvinced—about her own personal importance. With her term expiring in 2017, she was quintessentially enigmatic in her prose; seemingly unmoved by Brexit, much of the continent was left unsure about her future political intentions. The summer of 2016 was a subsequently tense affair. Yet, later that November, the electoral cataclysm of Trump quickly swung her mood: she announced her bout for a fourth term scarcely two weeks after his shock victory. She later won. The mother of Europe, it seemed, was to become the buttress of a beleaguered western order. 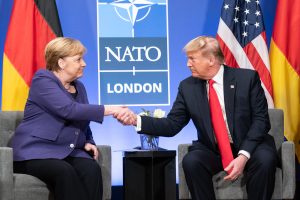 Image One: A contrast of two leaders- Merkel and Trump represented duelling eras of world politics

Such an assessment, though, would be unnecessarily romantic. For, despite being a symbol of self-assuredness and sangfroid leadership, Merkel was as much a defender of liberal internationalism as she was a practitioner of political expediency and caution. Although hardly exclusive to the ex-German chancellor, this strategic paradox was one that sat uneasily with the wider interests of Nato and the broader western community. Despite acting as a counterweight to the belligerence of Trump, her lack of surefootedness vis-a-vis China was as problematic as it was tenuous. Clouded by a resounding sense of defeatism, she did little to direct a more comprehensive vision for the future of western security policy in the face of a swelling Chinese military. This inevitably encouraged world powers to increasingly pursue alternative diplomatic paths—at the expense of formal multilateralism—as a means through which to react to perceived shifts in the Sino-Pacific balance of power. The recent diplomatic headache caused by the US, Australia and Great Britain demonstrates this actuality: the newly signed trilateral security pact, Aukus, did not adequately consult fellow partners or allies, leading to an especially tense diplomatic dispute with France.

However, the excessive caution of Merkel can hardly be seen as a salient driving force of western inertia. President Trump did much to fragment and rupture allied cooperation, instead favouring provocation as a tool to pit American interests against those of its partners. But, with his administration determined to retrench from the role the US played under previous presidents, the European Union struggled to become a united front. Instead of offering itself as a strong alternative to the chaos of US foreign policy, the EU became lost in political infighting. Indeed, Russian efforts to aggravate internal disputes surrounding immigration policy were aided—at least tacitly—by the indifference of Merkel. Here, the controversial construction of the Nord Stream II pipeline hampered EU efforts to constrain Russian provocation, owing primarily to her decision to continue with the implementation of a project she saw as fundamentally ‘commercial’—a characterisation initially met with rancour in Washington. 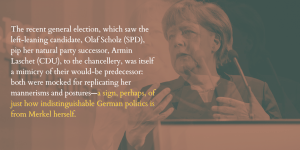 Yet, however contradictory she may have been on foreign policy matters, Merkel leaves her role following a relatively stable political transition. Unlike her European counterparts, German political discourse has generally managed to avoid the deep levels of political polarisation consuming debates in the UK, US and France— even despite the emergence of a more fractured party system. The recent general election, which saw the left-leaning candidate, Olaf Scholz (SPD), pip her natural party successor, Armin Laschet (CDU), to the chancellery, was itself a mimicry of their would-be predecessor: both were mocked for replicating her mannerisms and postures—a sign, perhaps, of just how indistinguishable German politics is from Merkel herself. What is certain, though, is that a leader of her ilk was always going to be a person of paradoxes; born in East Germany, her dedication to freedom and justice is intrinsically foregrounded by the contexts of her upbringing. It should come as no surprise, then, that Angela Merkel exits the fray as a woman with many faces, leaving behind a world moulded—at least partly—in her shape.

This article follows the style guide of The Guardian.