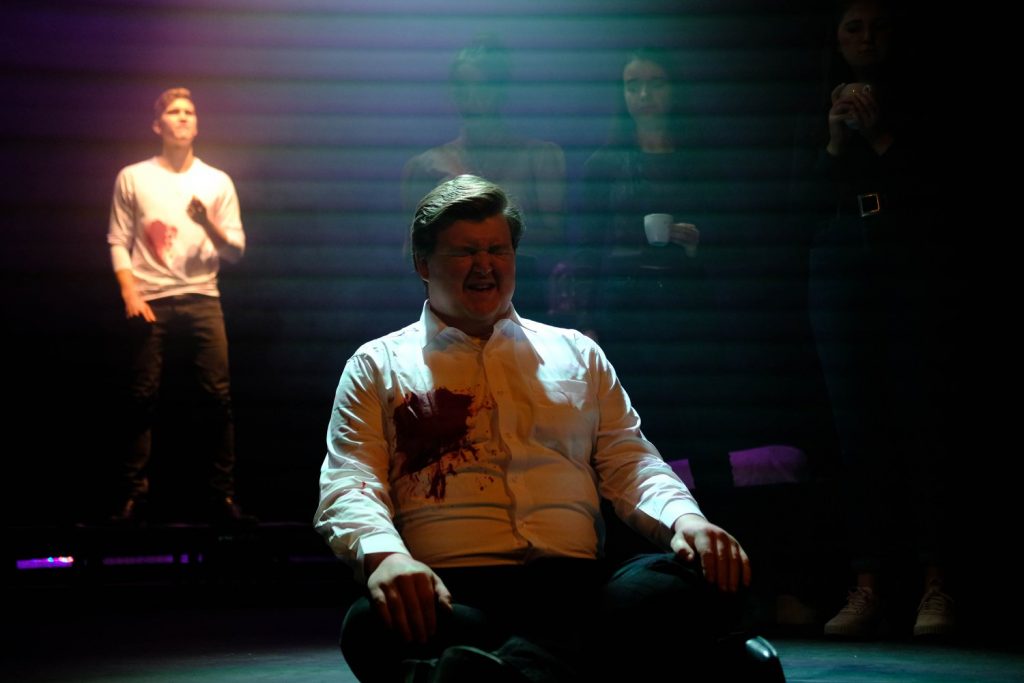 As the first show in the new Assembly Rooms Theatre, I had high expectations for Suffragette Theatre Company’s ‘Five Kinds of Silence’. A play described by the director Aaron Rozanski as one of ‘rage, sorrow and beauty’, the play tells the story of two daughters and their mother who murder their abusive father and husband, exploring the stories of each character. Overall, the show delivers; the acting is emotional and believable, and many of the directorial choices are well thought out. While moments of the play seem gratuitous in their descriptions of abuse and the primarily monologue form causes the pace to drag slightly, the acting, lighting, sound effects and staging come together to create an intense and unsettling atmosphere, perfect to tell a story of family relationships gone wrong.

The staging of the play is creative and impactful, although questionable decisions are made at times. The size of the theatre means that some of the intimacy and in-your-face quality the production needs is lost. Practically, the size also makes it difficult to hear the opening lines from Oscar Nicholson playing Billy 1. The decision to keep Nicholson, a strong actor, static and far upstage for the most of the performance means that it is difficult for the audience to engage with his narration. However, it does place the three women at the forefront of the stage, and therefore of the story. Keeping all the family members on stage throughout the entire play with scenes separated by use of lighting is clever, as it not only allows for smooth scene transitions, but it reinforces the focus on the family, and is used to illustrate how Billy continues to haunt his wife and daughters after his death.

The production is visually impressive throughout, with lighting being used particularly effectively, and the technical director Freddie Sherwood should be congratulated. The overpowering pink wash when Susan is forced to confront her father’s sexual abuse and the flashing lights used to portray Billy’s epileptic fit are successful in creating a disturbing atmosphere and building tension. The use of sound is also effective, particularly the ear grating ringing which sets the audience on edge. However, there are moments when the music decreases the horror and impact of the scenes, such as under Martha Wrench’s shocking and skin-crawling monologue where she relives her father’s sexual abuse. The final gunshot noise is disappointingly anti-climactic, after the sudden bangs at the beginning which had audience members jumping out of their seats. However, the play ends on a strong visual, with the three women disappearing into the smoke upstage and Billy left lying alone in a cold blue spotlight, making the audience feel at least a little gratified that this horrible man has received what he deserved.

The roles in this production are not easy to play, and the actors generally succeed impressively at bringing these damaged, twisted characters to life. Special praise must go to Thomas Bracewell as Billy 2, who switches between childish vulnerability and maniacal sadism with unsettling speed. Martha Wrench is also spectacularly believable in her role as Susan, as her matter of fact delivery and mingled anger and guilt in describing her character’s sexual attraction to her father is uncompromising and deeply uncomfortable. The believable sister relationship built between Wrench and Helena Baker playing Janet is one of the play’s greatest strengths, shown through subtle glances and mirroring in their movements. Georgia Laird succeeds in capturing the maternal, reserved aspect of Mary beautifully, though I found her one tone of vulnerability becomes slightly repetitive. There are some issues with pacing; the delivery of monologues lags occasionally, but overall the intensity is built and maintained well throughout the production.

‘Five Kinds of Silence’ is a heavy, uncomfortable show which succeeds in many places at telling what is, indisputably, a dark and difficult story. I feel at some points the play suffers because it can’t decide quite how uncomfortable and horrified it wants to make its audience. However, I highly recommend seeing the production which, if not exactly enjoyable, is certainly intriguing and powerful.