Doing a phone interview is strange. Talking to someone you don’t know is hard enough without the added complication of no eye contact. Couple that with talking to Tom Robinson, a man with two top 10 singles, a top 10 album, a BBC radio career spanning almost three decades and a wealth of media attention over the years, and you can understand that the whole process becomes a little surreal.

I start by going down the easy route and ask him about his new album, Only the Now, and why he chose to release it at this point, after nearly twenty years of studio silence. His answer is surprisingly honest. “I didn’t really imagine the world was actually holding its breath waiting for another Tom Robinson album, and my work with BBC Introducing has left me with no illusions about the fact that there’s just too much music being made out there in the world. I think I took my own advice which is ‘just make it for its own sake and hope that people will like it’.” 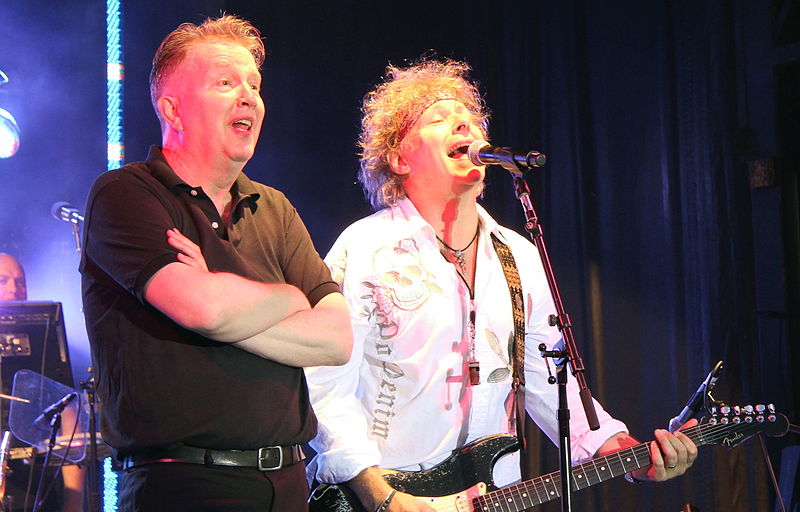 The album features a wide variety of contributors. Established artists like Billy Bragg and Nitin Sawhney mix with emerging talent such as Swami Baracus and Nadine Shah, coupled with surprise appearances from left-field guests like Colin Firth and Ian McKellen. Upon being asked how he got such a wide range of people to pitch in, Tom is once more forthright. “Basically, I’ve lived long enough that I’ve been privileged enough to meet a lot of these people. Ian McKellen I knew from the anti-Section 28 demos of the 1980s. Billy Bragg I knew from various miners’ benefits or what have you in the 80s also. But then other people like Nadine Shah and John Grant, I’ve kind of known through my work at 6 Music.”

The major contributor to the album, however, is producer Gerry Diver. According to Tom, his influence is responsible for the folky feel that pervades a number of the tracks. “Necessarily, the musicians that you work with are going to bring their own creativity to bear and Gerry Diver’s background is in folk music.”

The folksiness is not the only style though, and Tom is quick to credit Gerry for that broad palette of textures. “Not all of it has that kind of vocabulary. Like ‘Holy Smoke’, the one with Ian McKellen being God, it’s more kind of 8-bit chip-tune kind of stuff, and I was really surprised to find Gerry not only being open to that but actually suggesting it and promoting it and going ‘No, no, you have to make it more like The Prodigy’. So he’s got a really open mind and it’s taken us to some very interesting places.”

‘Mighty Sword of Justice’ is one song that does stick with the folky mold. With Billy Bragg providing extra vocals and a real sense of anger in the lyrics, it bears more than a striking resemblance to veiled protest songs like Bruce Springsteen’s ‘Death to My Hometown’. I ask Tom if it was his intention, given the current political climate, to write political songs for this album, and he explains. “Well, that particular one was supporting the Justice Alliance trying to save legal aid. And to be honest there’s plenty of dyed in the wool Tories who support the Justice Alliance, because it’s simply a question of simple human justice that people should have access to a fair trial, regardless of how much money they have. The song wasn’t anything like what it is now and it’s just kind of grown and settled into itself and now it’s the sort of song you can close a set with. There’s a live video of my performance at Latitude and honestly, I swear to God, people applaud for ninety seconds non-stop at the end of the song. They just went crazy for it.”

Tom played on the BBC Radio 6 Music Stage at Latitude and is heavily involved at the station, presenting three shows a week. I ask him if he feels he’s taken inspiration from any of the bands he’s showcased, and his response is immediate. “Oh God yes! I mean, all of them. Nobody knows where creativity comes from. Everybody has their own and each new generation of creative artists kind of come to their own in their late teens and early twenties and kind of find their feet and have something to say that nobody’s said before and they’re terrible competition! I mean, that’s one reason I made the record just for myself – I don’t expect to compete with today’s nineteen year olds. I don’t think it’s that young people are more creative than older people, it’s just that they don’t have other things cluttering up their minds and they can just focus entirely on their work. And, occasionally, you’ll get someone older who does exactly that still – Richard Thompson for instance. But there aren’t many people who made their first album in 1967 and have made one album a year since and they’re all great. So I’m not being ageist about it, but it happens more frequently with new young artists.”

Given this opinion, I question whether he misses being that youthful and focused solely on music. He again replies instantly. “Oh, it was a terrible time! I was miserable as sin! I mean I was the most tortured soul imaginable. I had a horrible teens, and really quite a painful twenties – two nervous breakdowns and I went through ten years of psychotherapy. It turned me into a sane human being who could actually form a relationship with somebody else, so I don’t miss all that angst. But, it does produce interesting music!”. He laughs as I suggest maybe you have to sometimes make sacrifices to get what you want and says, “I don’t think you necessarily have to suffer to produce interesting music!” and it’s fair to say, no one should have to suffer as much as he did.

A lot of the suffering that Tom experienced was as a result of growing up openly gay in a period during which, in his own words, “there was a lot of hatred” towards the LGBT+ community. I ask whether his experiences as a gay musician led him to writing politically charged material or if the political heart came before the music and the suffering of the LGBT+ community just intensified that. “Well, in a way, in the late seventies and early eighties, things did start to improve for the better.There was a lot more tolerance as people like Soft Cell came along and Frankie Goes to Hollywood and stuff – there was an increasing tolerance, certainly among the younger community. But then along came AIDS, and we got this horrendous reaction both from the establishment and from the established media. The Sun and their ilk used to print the most horrible, horrible homophobic rants on their front pages and it was a very difficult time. So that was horrible and the thing is, it was only really with the death of Freddie Mercury that things started to change. In the nineties there was almost like a tipping point, and we had the Red Hot + Blue series of albums and gradually we shifted.”

He then asks if I’ve seen the movie Pride, and when I’ve confirmed that I have, he says, “It’s a wonderful movie and a wonderful story and I remember it at the time because I remember Siân James getting up on stage at Pride ’85 and saying ‘If any child of mine was gay, I’d be perfectly happy and that would be cool’. And that was such an unimaginable shift you know, when you think how things were from that background. And it was thanks to the miners with their block vote supporting LGBT rights at the Labour party conference that year that it got onto the Labour manifesto and that we finally got equality under law under the Blair government. So that tiny beginning from those people with collecting boxes trying to do the right thing did lead to an amazing shift in society.”

I steer the conversation back towards being gay in the music community in the late seventies and ask him if it was difficult being a gay punk, given that movement’s quite masculine aura. He says emphatically, “But it wasn’t! That’s the whole thing. Punk subsequently became a very regimented uniform thing where everyone had to have spiky hair, everybody had to wear bondage slides and leather jackets. It became yet another straitjacket, but punk at its origin – not that we were punks, I was too old to be a punk – was about doing differently, of flying your own flag, being yourself. It was a collection of freaks and misfits and people that felt alienated from mainstream society. Anybody could come to a punk gig. That was the beauty of it. It was only after it became commodified that it turned into this thing that you had to look like The Clash. But I remember gigs in ’76 and ‘77 with people in pink mohair jumpers, people with eyeliner, make-up, all kinds. It was a wonderful big ‘fuck you, we are who we are’ kind of movement, and do it yourself, and do it your way. That’s why I was able to get away with a song like ‘Glad to Be Gay’ because it was provocative in its own way, and although it’s just like a music hall track and doesn’t sound remotely punk, the attitude of it was I suppose.”

By this time, to my disappointment, we’re rapidly approaching the end of my interview slot, so I have to quickly jam in my final few questions. I end the same way I have done in previous interviews – asking for Tom’s Desert Island Disc and his ideal contributor from across musical history. After being reassured that an obscure album is a perfectly good choice, he says, “Well it’s by Eg and Alice. So Eg is Eg White who’s now a sort of famous pop songwriter, but in the early nineties he was the musical partner of Alice Temple,the first female European BMX champion. Anyway, they were living together in a basement in Notting Hill and they put a 24-track recorder in their kitchen and they made this extraordinary album called 24 Years of Hunger with a picture of Alice on the front. I think it’s wonderful. I could listen to that forever.”

For the final question, he is initially lost in thought. “It’s difficult because the people I admire aren’t necessarily the people who’d like me. So someone like Charles Mingus, who I think is an extraordinary artist by any standard, or Muddy Waters.I don’t think either of them would have wanted anything to do with me. I think Alexis Korner. He was my mentor, my first mentor. There are very few recordings of him as he actually was in the flesh when he just opened his mouth and sang, and I’d just love to get some authentic Alexis on a collaborative record and just show the world what a brilliant man he was.”

With that, my time is up. Having regrettably refused the offer of a guest list entry to his show at Rough Trade – tickets from Durham to London for a gig are just a tad out of my student budget – we say our goodbyes and I hang up, thrilled to have been able to interview such an interesting and pleasant man.

And his new album’s pretty good too.

Tom Robinson’s new album, Only the Now, is out now on Castaway Northwest Recordings. His 6 Music shows are The Tom Robinson Show at 21:00 on Saturdays, The BBC Introducing Mixtape at 02:00 on Mondays and Now Playing @6Music, available online.