Motion Voted Down by Outraged Assembly 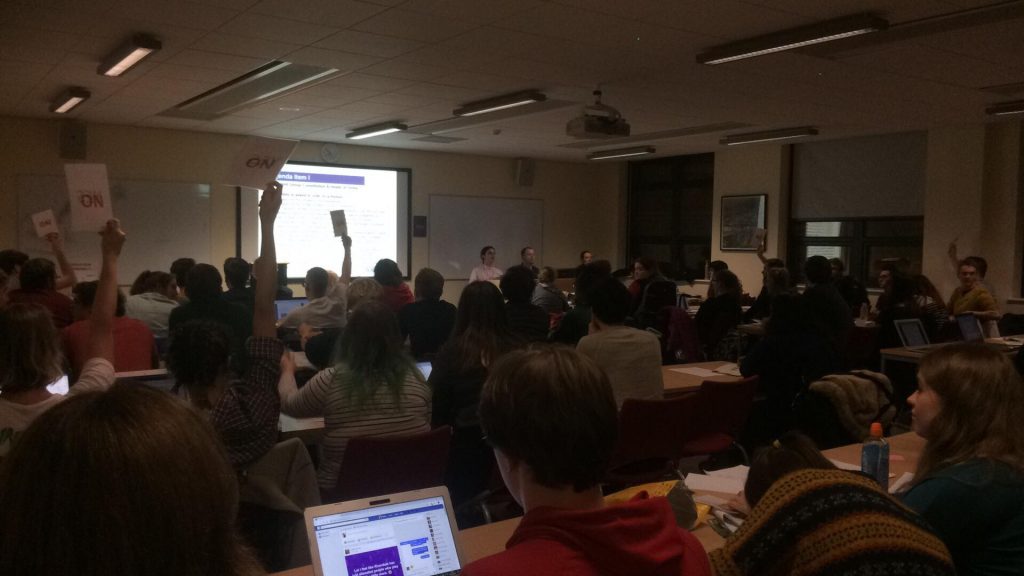 The DSU Assembly voting on the motion.

At 7:45pm tonight the controversial DSU motion enforcing mandatory constitutions for student groups was voted down by assembly majority.

Two rounds of statements from individuals for and against the motion occurred before the vote.

Steven Lowes, Societies Committee Chair, was quoted saying the formulation and pursuit of the motion ‘wasn’t normal’, at one point shouting to the assembly ‘this is fucking absurd’.

Amelia McLoughlan, President of the Student with Disabilities Association (SwDA), repeatedly raised associations’ lack of consultation over the motion.

Dan Boyle, exec member of Durham University Esports Society, objected to the motion on the grounds that the Code of Conduct sections of the motion’s proposal papers had been left blank, saying ‘this is one of the biggest issues impacting societies’.

A representative from the charity Nightline spoke in favour of the motion, establishing that the proposed motion would not effect their association.

Jess Dunning, Station Manager of Purple Radio, also spoke in favour of the motion when discussing with the assembly her suggested amendments. Dunning controversially went beyond her 3 minute time limitation to again speak in favour of the motion during a round of questions, claiming to have a question about another clause before resuming her speech.

During the question rounds Neve Ovenden of the currently un-ratified Working Class Association asked Charlie Walker why the Trans, Working Class and Womens Associations had yet to be ratified and if they would be allowed to present to the Assembly during their 7 month period awaiting ratification.

The Bubble approached Charlie Walker after the assembly but Walker replied that he was ‘too tired’ and denied an interview.