Dunning posted in the Facebook group SG Execs 2018/19 at half past seven in the evening to express ‘political’ support of the mandatory constitutions motion that will be debated at a DSU assembly this Thursday. She writes: ‘I feel it is my duty to show you the argument for this policy’ as she believes ‘the SU does a lot for its societies’.

Confronted with the condemnation arising from the lack of student consultation for this motion, Dunning conveyed criticism but expressed that she believes the DSU ‘have taken (this) on board’ and that she is satisfied with their claim to ‘endeavor to do better in future’.

Dunning then proceeded to raise different aspects of the controversial new motion in order to explain why from her perspective this motion would be ‘the groundwork for what could be a great relationship between societies and the SU’.

Other society execs in the Facebook group were quick to take issue with Dunning’s political endorsement.

Societies Committee Chair Steven Lowes commented that he ‘still has to recommend voting against the motion’ as it ‘has been pushed through against our recommendation without any consultation from student groups’.

Andrew Wilson objected to Dunning’s claim that the motion ‘is very much the same as you would find in any other Students Union’, giving Kent as an example of an SU ‘with no formal policy’. He wrote of his concern of this motion making the DSU ‘judge, jury and executioner’.

He also slammed Dunning’s personal endorsement writing ‘I have always found Palatinate and Purple Radio to be something of DSU groupies’.

Keturah Civelek and Phoebe Sleath rose concerns for this new motion being ‘very time consuming’ for student execs over the motion’s introduction of mandatory development plans.

Dan Boyle added: ‘It’s pretty crazy that people don’t like it, it’s almost like the DSU haven’t really talked to anyone about it in any meaningful way whilst continually making it harder and harder to run a student group’.

Full details of the proposed motion can be found in the assembly papers. The motion will be voted on this Thursday’s assembly at 6-8pm. To express your views and influence the vote, talk to your College SU representative. A list of all college SU reps can be found on the Student’s Union website. 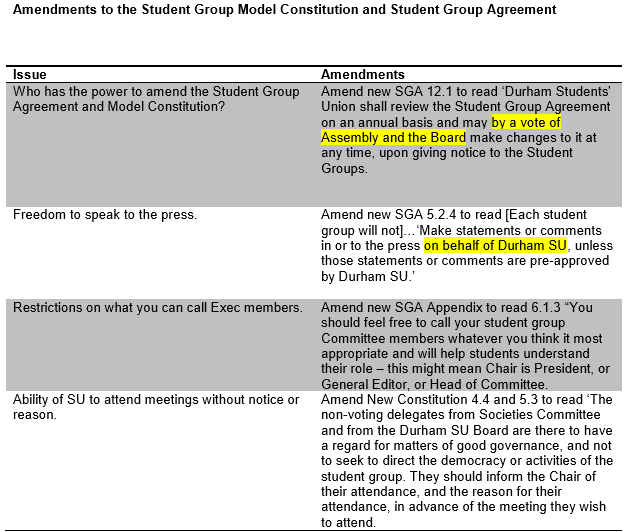