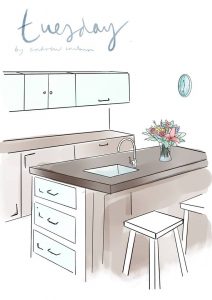 Andrew Cowburn’s ‘tuesday’ tells the story of Daniel (Jack Firoozan) who is home alone after school. His friend, Sophie (Grace Longman), comes over and they have many typical teenager conversations. Daniel continues to ignore phone calls from his dad and only picks up when Sophie leaves the room. When she returns, he is clearly distressed and refuses to tell Sophie what he’s been told in the phone call, so she leaves. Daniel leaves two voicemails for his brother, one angry and one apologizing. The play ends with Daniel leaving to find his dad and brother.

The play begins awkwardly: the audience watch Daniel for (what feels like) a long time. We watch him message, sit at the table and drink coke for over a song’s-length. It was difficult to tell where the play was going, but maybe Andrew Cowburn wanted us to feel awkward. This awkwardness pervades the rest of the performance as the conversation between Sophie and Daniel sometimes feels stilted and the audience are left to wonder what Daniel has been told on the phone.

The performance also contains very little movement: it is mostly focused around Daniel, and his conversation with Sophie. This is emphasized by the setting: it’s set in one room and there are very few light changes. The elongated conversations between Sophie and Daniel contribute to the inactivity too, making the whole performance slow-moving.

However, the sense of realism is conveyed very successfully by the cast. Daniel is presented as the stereotypical teenager, from his untucked uniform, phone usage and music selection. Jack Firoozan is especially strong in acting such realistic, ‘ordinary’ scenes: he pulls off the natural very well. Cowburn also lifts the overriding awkwardness of the play through Daniel’s funny one-liners during his conversation with Sophie. These earn laughs from the audience and are a welcome break from the audience’s unease.

Although on stage very little is happening, Cowburn does hint at more sinister undercurrents. The multiple plasters on Daniel’s hand seem like a subtle warning to the audience of something more ominous, whilst Daniel’s refusal to answer his dad’s calls leads the audience to question their relationship.

The theme of miscommunication also adds a less mundane dimension to the events on stage. Every conversation between Daniel and Sophie seems to end up in argument as they talk about typical teenage topics: friendship groups, teachers and gossip. The regular collapse of conversation further contributes to hints of unease.

Cowburn continues the miscommunication through Daniel’s distractedness when talking to Sophie, which extends to his refusal to tell Sophie why he’s upset. On a wider scale, the audience are prevented from hearing the voice on the other side of the phone. This voice becomes a significant instigator of the plot, yet the contents of it are barely communicated either. At the end of the production, we are left wondering what exactly has happened to Daniel’s dad and brother.

Overall ‘Tuesday’ has a lot of potential: the acting is skillful and realistic, some of the lines are entertaining, and Cowburn hints at underlying issues well. However, at times the play feels stilted and awkward. There could’ve been more action to keep the plot moving as I felt that we listened to ordinary conversation and screenplay for a little too long. I appreciate the ambiguity of Daniel’s family life (perhaps drawing on the miscommunication theme) but I think there could’ve been more indication of what happened to Daniel’s dad and brother and the underlying issues.