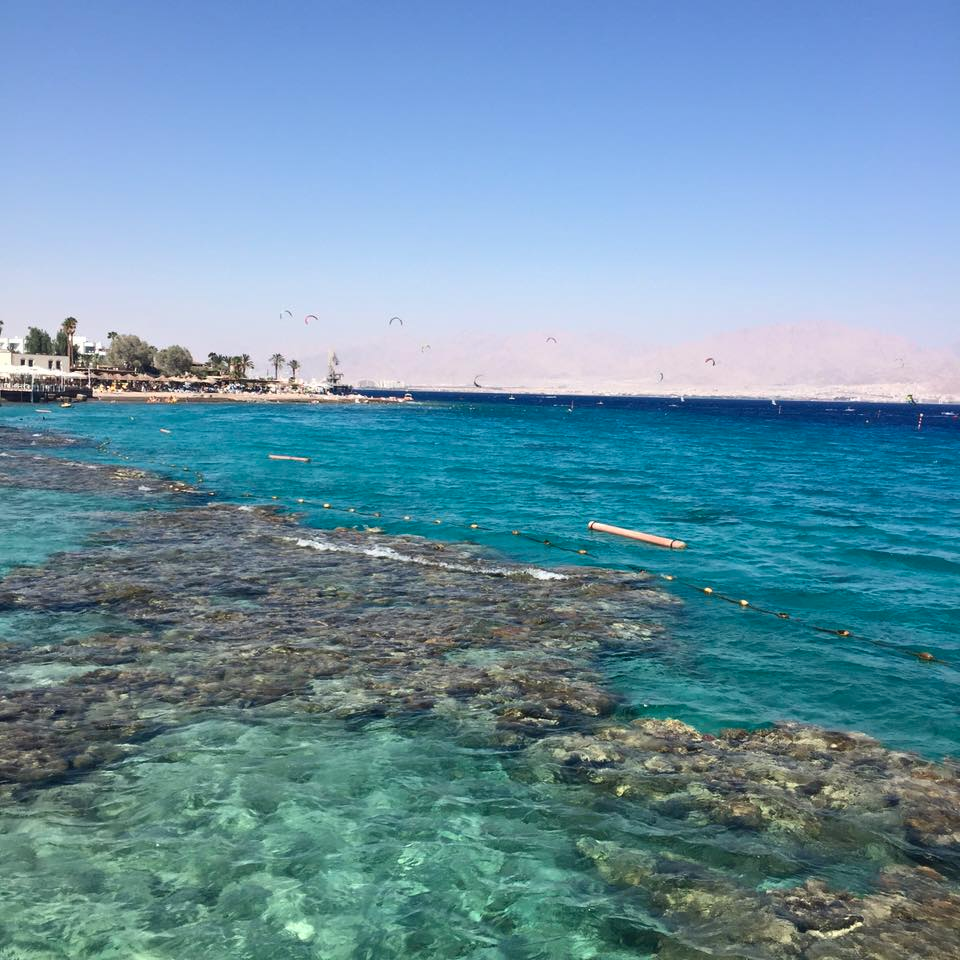 Eilat’s stunning coral reefs are second to none. In the background lie the red mountains of Jordan, with Saudi Arabia just out of view on the right.

In an outlet on the Red Sea, sandwiched between Egypt, Jordan and Saudi Arabia, lies the city of Eilat. Well-known for its fantastic year-round climate, Eilat is the perfect city to explore the Red Sea’s coral reefs up close and personal. The reefs boast an impressive array of fish – it is thought over 5,000 make this part of the Red Sea their home – and are well-maintained and protected by the government. For those who don’t feel like getting wet, the nearby Underwater Observatory boasts a voluminous selection of fish, turtles, sharks and other aquatic animals, and is the biggest museum of its type in the whole of the Middle East. Eilat is also a convenient entry point to two open borders with Jordan and Egypt, which are both a mile or two away, meaning day trips to Petra and Sinai’s Saint Catherine’s Monastery are do-able and recommended. But then again, with average year-round temperatures of 25 degrees, it might be more tempting just to sit back, relax and sunbathe the days away on Eilat’s award-winning beaches.

Easy-going Haifa in the north offers refuge from the southern, desert-like heat during summer. Despite being overlooked for the country’s better-known cities, Haifa has many unique selling points. It boasts one of the most expansive Baha’i Gardens in the world, with the centre being a site of pilgrimage for those of the Baha’i faith. The city is renowned for hosting some of the state’s best museums, including the National Museum of Science, the National Maritime Museum and the Haifa Museum of Art. For those who enjoy history, the Clandestine Immigration & Navy Museum details the struggles faced by Zionists and the blockades placed on Jews entering British Palestine during the Second World War.

The best things here are nature-related. The Dead Sea, straddling several borders is arguably one of the biggest pulls. The drive down to the coastline, which is situated 429m below sea-level, and is not just the lowest land point in the world, but getting lower and lower every year, is sublime. The legendary salinity of the water makes it the only body of water in the world where it is impossible to sink. 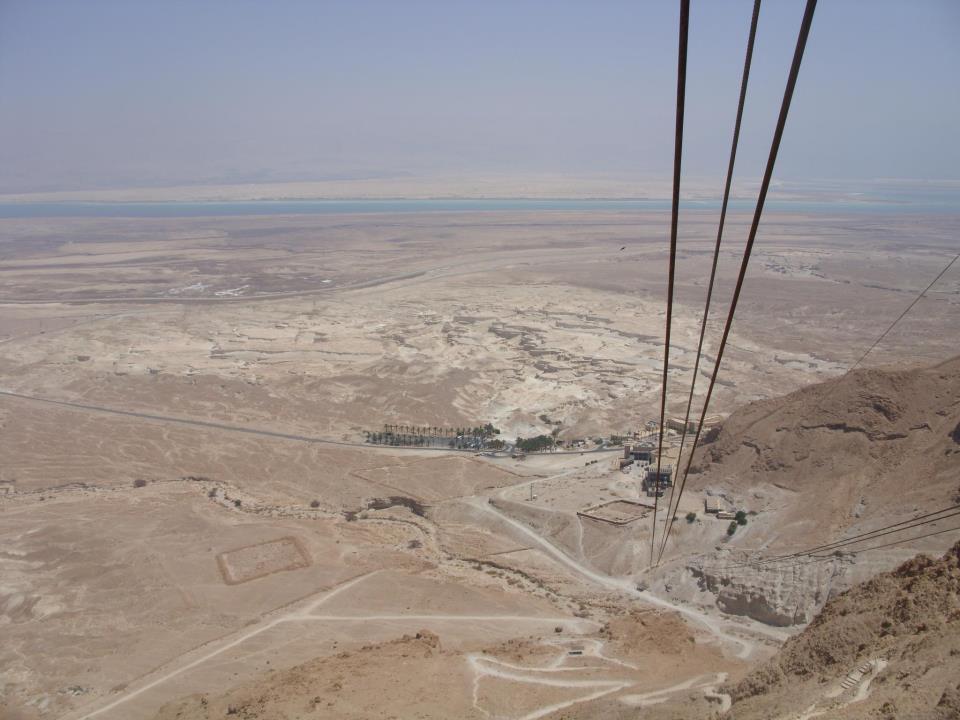 The Dead Sea—the lowest land point—viewed from atop Masada, a Jewish fortification system dating back to Roman times.

Situated in the desert wilderness close to the Jordanian border, just a stone’s throw from the Dead Sea, lies the ancient Jewish fortress and UNESCO World Heritage Site of Masada. The fortification was built almost two thousand years ago during the first Roman-Jewish War. Offering spectacular views of the Sea, Jordan and the surrounding Judean Desert, it’s easy to combine a visit with the nearby Dead Sea. The Negev, a sprawling desert which stretches from Tel Aviv down to the Red Sea coast, overlapping with the Judean, is an opportune place for outdoor activities such as camel riding and desert biking; Lonely Planet recently awarded it second place for ‘Off the Beaten Track’. Its isolation proves to be its enduring charm.

Moving northwards, The Jordan River, regarded by Christians as Jesus’ baptism site, winds its way through the mountains and fertile fields of the northern regions before emptying into the Sea of Galilee, well worth a visit in its own right, especially for its ancient and picturesque surrounding villages. The nearby Golan Heights offer unbeatable mountain-climbing and hiking opportunities, and is one of the few places here to receive snow in winter… when skiing becomes a real possibility!

If the sightseeing and adventures become too much and you need to cool down, you’re never far from the coast. Take a splash in the beautiful Mediterranean or Red Seas, where you encounter some of the best coastlines in the Middle East. 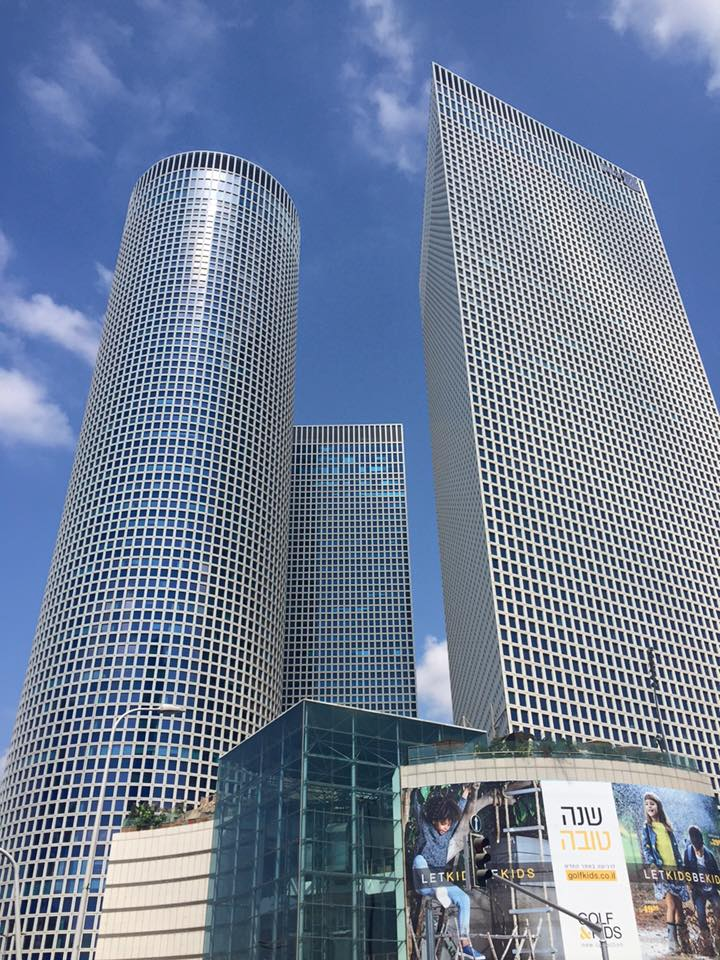 The Azriely Centre, the state’s tallest buildings. Located at the top of the round tower on the 49th floor is the Lookout, offering spectacular views over Tel Aviv from 187m up in the air.

Most visitors arrive at Ben Gurion International Airport, conveniently located halfway between Tel Aviv and Jerusalem within easy reach of both cities. Be prepared for tough questioning and a thorough security check on arrival, and a grilling of your travel plans. Cruises frequently dock in both Haifa and Ashdod, south of Tel Aviv, as well as in Eilat. Land borders with Jordan and Egypt are open and frequently used by locals and tourists alike. Borders with Lebanon and Syria to the north are firmly shut tight.

Beware: once you get in, you may never wish to leave!