Memories from a Nepalese Orphanage 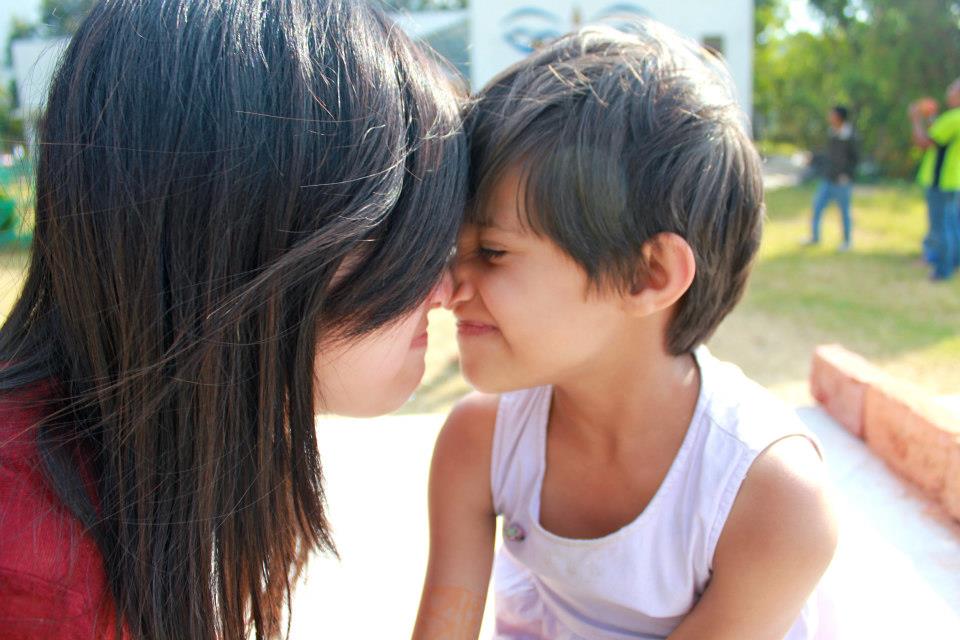 With its shabby, modest houses, gravelly roads, and dusty air, Nepal may be the polar opposite of everything I had become accustomed to in Hong Kong. Walking along an ordinary street (simultaneously avoiding the hasty traffic of rushing motorcycles and honking cars), complete strangers will call out friendly “hellos”, and women will smile at you with crinkled eyes. Back in Hong Kong, hardly a glance is ever afforded to other passersby, with everyone strictly following personal agendas, eyes glued to blinking screens. But in Nepal, I was overwhelmed with a sense of tight-knit community, where even haggling after petty prices in local shops turns into friendly banter. After just one week spent in Kathmandu, I learnt buckets and came to love the place, its traditions, and its people.

Cultural visits to Kathmandu’s many stupas were nothing short of remarkable. Stretched all around the white domed temples were colourful panels of prayer flags fluttering in the breeze. Locals inscribe bad thoughts and nightmares upon them for Hindu gods to take away. The square surrounding the temple was particularly majestic during late afternoon, when the setting sun cast a warm glow over the golden buildings. The seemingly ubiquitous pair of Buddha eyes, known all over the world as symbolic of ‘the light of Asia’, were especially prominent atop these temples. We found even more hustle and bustle within Kathmandu Valley and nestled within it, the sacred city of Bhaktapur Durbar Square. We were surrounded by an assortment of pagodas and temples clustered around a huge palace made of brick and wood. The air was alive with Hindu music, cries of street hawkers, the braying of cows and goats. It was a place where chickens literally crossed the road. The square exuded charm and tradition, highlighting idols of ancient kings that perched upon pillars, guardian deities looking out from their sanctuaries, and wood carvings found everywhere: on arches, windows, gateways… A palace in the city centre housed the selected ‘Royal Kumari’, a girl believed to be a Goddess during her prepubescent stage and heavily worshipped by the people, an idea that struck me as rather alien yet hugely intriguing, steeped in its mythology. Every aspect of this city bursting with culture seemed to form a well-orchestrated symphony that is Bhaktapur. However, the memories I will hold closest to my heart are not of sightseeing in beautiful Nepal or panoramic vistas of Everest, but our visits to the orphanage. 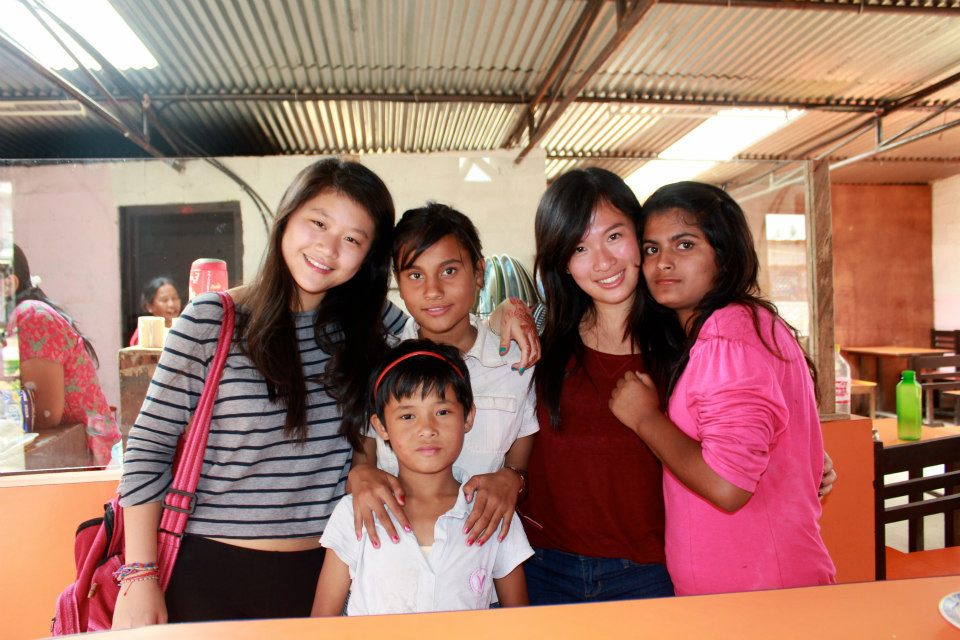 “I spent most of my time with four very special girls”.

Never had I thought it possible that you could become so close to anyone within the course of a few days. But with these kids, it was an entirely different story. They warmed up to me and my friends within seconds of our very first visit, and we, too, soon became smitten. Every day the van would pull up by Katja House in the morning and, unfailingly ready to greet us, there were the enthusiastic children, immediately tugging on our hands and hugging onto our waists as we stepped out. Their excitement was contagious. To see their faces light up as we gave them books and new toys, their eyebrows furrow in concentration as we read with them, their carefree laughter whilst participating in sports and games, were enough to make the hardest of hearts melt. And in return, they showered us with unconditional love.

I spent most of my time with four very special girls. Their names were Mamati and Anjali, both aged 12, Swarnima, 9, and Bhidya, 15. Within the orphanage, they brought me into their simple bedrooms that they shared with fellow brothers and sisters (titles they affectionately called anyone they considered themselves close to), they brought me up to the roof that offered a sublime view of the surrounding forests, houses and fields, and around the fringes of the campus where, much to our thrill and horror, we caught sight of black snakes slithering in the gutter. One girl climbed up a tree to pick a fresh guava for me, her clear adeptness and nimbleness rendering my weak protestations useless. They taught me how to fly a kite for the first time. They led us on walks along rough paths and to the peak of a hill where they often visited a temple, and through fields of wheat, where we would sit on a rock’s edge, mesmerized by the rolling greenery that stretched out for miles beyond us. 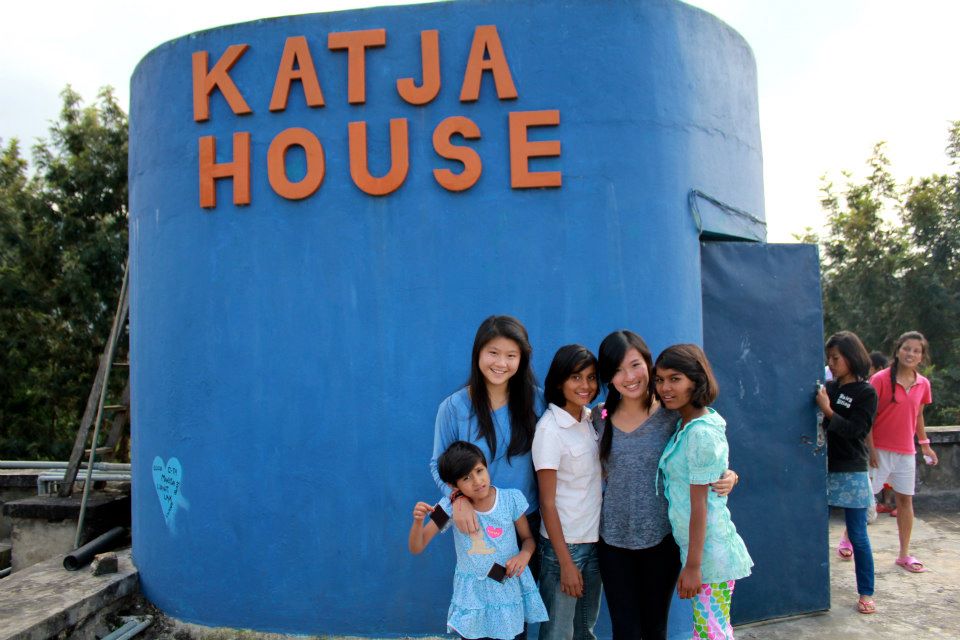 Everyday contained a bitter sweet goodbye. ‘Come earlier tomorrow, okay?’ They’d say, and I promised them we would. Even then, it was difficult to imagine how the final farewell would be like.

On the last day, arm in arm, the girls brought us on a lengthy, strenuous walk to show us their school. They were surefooted; we weren’t as quite. It was a rough path they had to take every day. Because of the hot and dry weather that afternoon, we were all famished after our little tour. I recalled Bhidya telling me that her favourite food was pizza, so we decided to sit at a local restaurant to eat just that, although ‘pizza’ here consisted in a small lump of half-baked dough with crude toppings seemingly plopped on. We chatted happily over our meals, and afterwards we were all content, our stomachs full and sated.

Then, something extraordinary happened. Bhidya pulled me to one side, looked at me with eyes that held all the earnestness in the world, and said in her broken English, ‘Sister, thank you for fulfilling my dream.’ I never asked what for, and for a moment I wondered whether it was the pizza we had bought for her. I had only really spent time with them, hardly enough to ‘fulfill a dream’. And yet the way she expressed such profound gratitude for the simplest things that we did together was deeply touching. I came to see her as a sister, too. Neither will I ever forget the adorable Eskimo kisses from little Swarnima, or the folk dances Anjali and Mamati demonstrated for me.

Towards the end of the trip, as we drove up on one of the high scaling mountains of Nepal, the surreal scenery was breathtaking enough to induce me into a deeply pensive mood. The hindsight of my orphanage experiences and local culture, along with frequent power cuts, dilapidated squat buildings and clouds of dusts floating from unpaved roads… it all sculpted the incredible memories made. Life here in Nepal may not be the high life, if that’s what you would call First World comforts, but at 10,000 feet, perched on top of a mountain with the hazy view of Everest and the past days’ experiences washing over me, it was my definition of the high life.