Hitting the Gringo Trail (Part One) 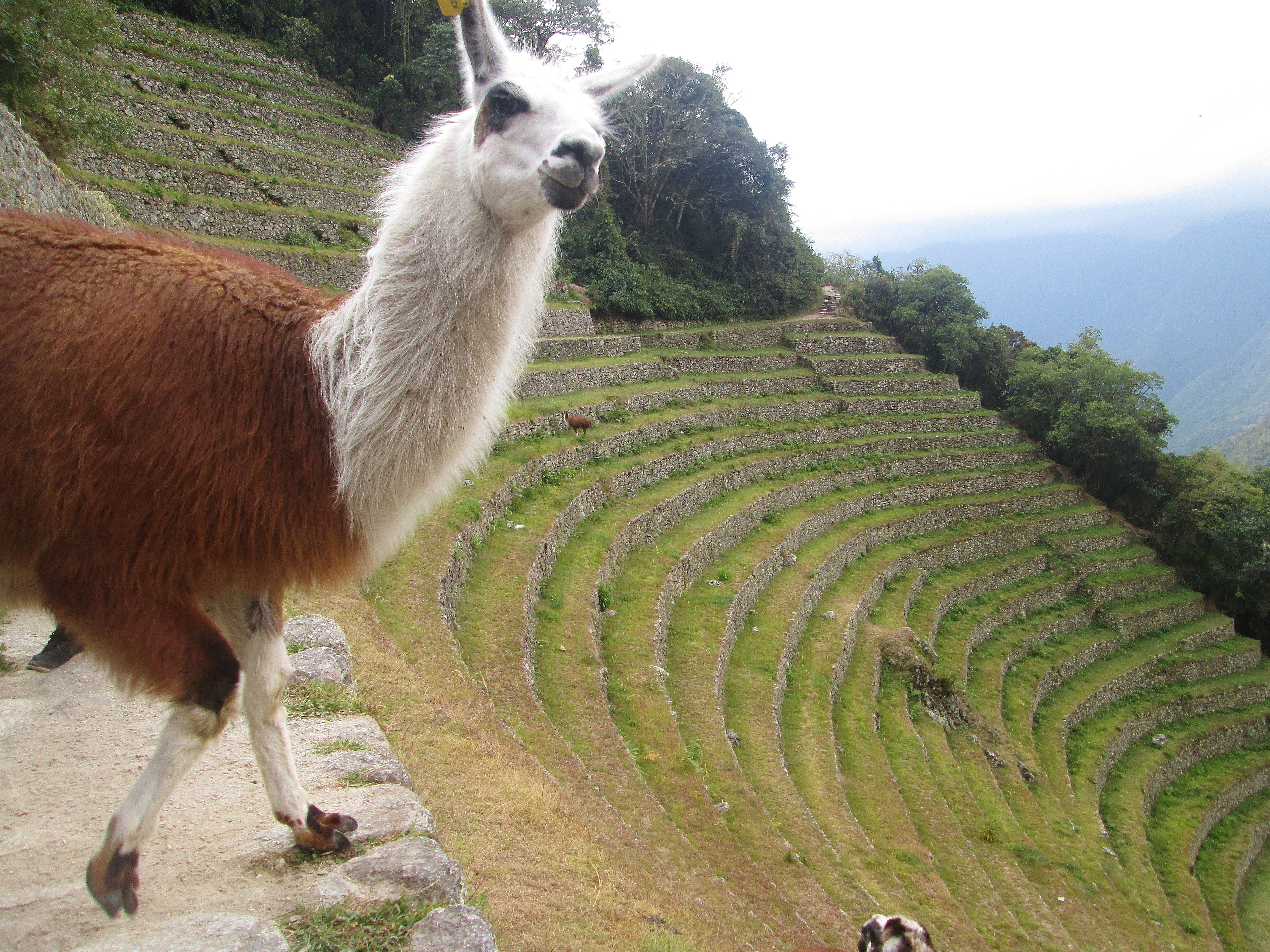 Peru is a lot more than just llamas.

If you ever happen to be a tourist in a Latin American country, the first Spanish word that you are likely to learn is gringo. With its origins reported to lie everywhere from the phrase ‘it’s Greek to me’ to the Romani for ‘wayfarer’, or even the green uniforms of US officers, the word has become synonymous with the hordes of backpackers that flock to the continent each year.

However, in one country in particular, that word has taken on another meaning. In Peru, the term refers not only to the tourists themselves, but rather to the route that they traditionally follow around the country. This has led to the birth of the ‘Gringo Trail’, which seems only to increase in popularity each year as travellers realise the diversity that this nation has to offer. But what exactly is the route offering that keeps people coming back? Join us on a tour of this southern Peruvian semicircle to reveal all of its best kept secrets…

For many, the simplest place to start the journey will be in Lima, the site of the country’s major international airport. A big, bustling city, it may not at first jump out to you as a fantastic tourist destination – most people do indeed just pass it by as they head for their next travel connection – but the capital actually plays host to some surprising hidden gems. 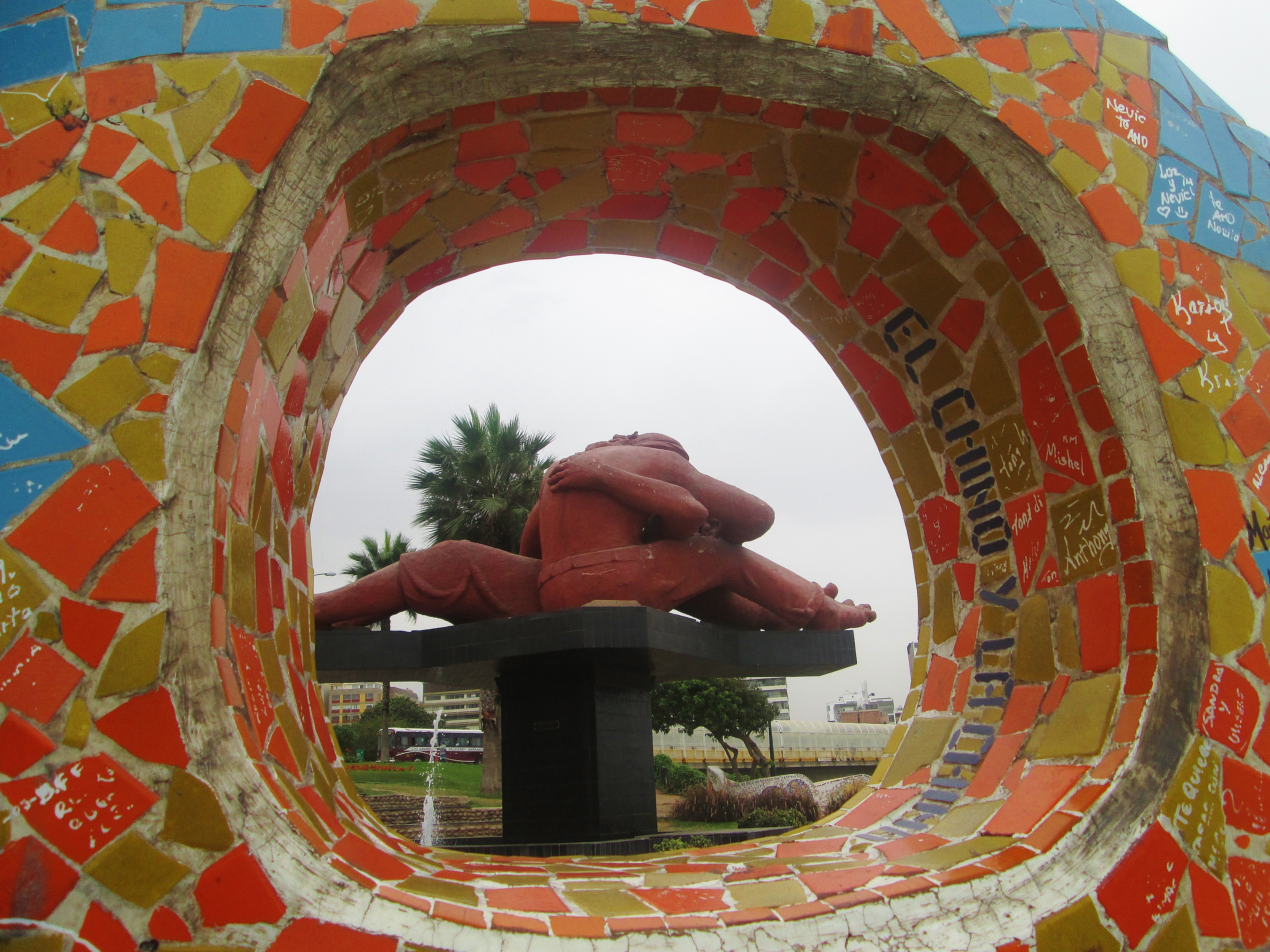 Stay in Miraflores for a laid-back, urban vibe in a modern redevelopment by the coast, watching surfers take to the waves and paragliders to the skies as you enjoy the boardwalk and even the ancient archaeological site of Huaca Pucllana. This barrio is also where you’ll find some of South America’s top restaurants as the city has experienced a gastronomic revolution in recent decades, with chefs such as Rafael Osterling and Gastón Acurio cooking up a whole new take on traditional favourites. But don’t stop there – the historical centre holds its own secrets and it would be a crime not to explore history in the Museo Larco, take in the views from the Convento de San Francisco, and enjoy the lights of Parque de la Reserva’s nightly water show.

Once you’re done with big city life, head down the coast to the seaside town of Paracas, where if the laid-back beaches don’t get you, the Islas Ballestas surely will. Take an early morning boat out from the pier to this small group of islands which have become one of Peru’s most popular ecotourism destinations for their range of wildlife, offering the up-close views of penguins and sea lions that you may not have expected in South America! The afternoon can then be spent lazing on the shore, or more adventurously exploring the Paracas National Reserve by jeep to get a feel for the area’s tropical desert ecosystem. 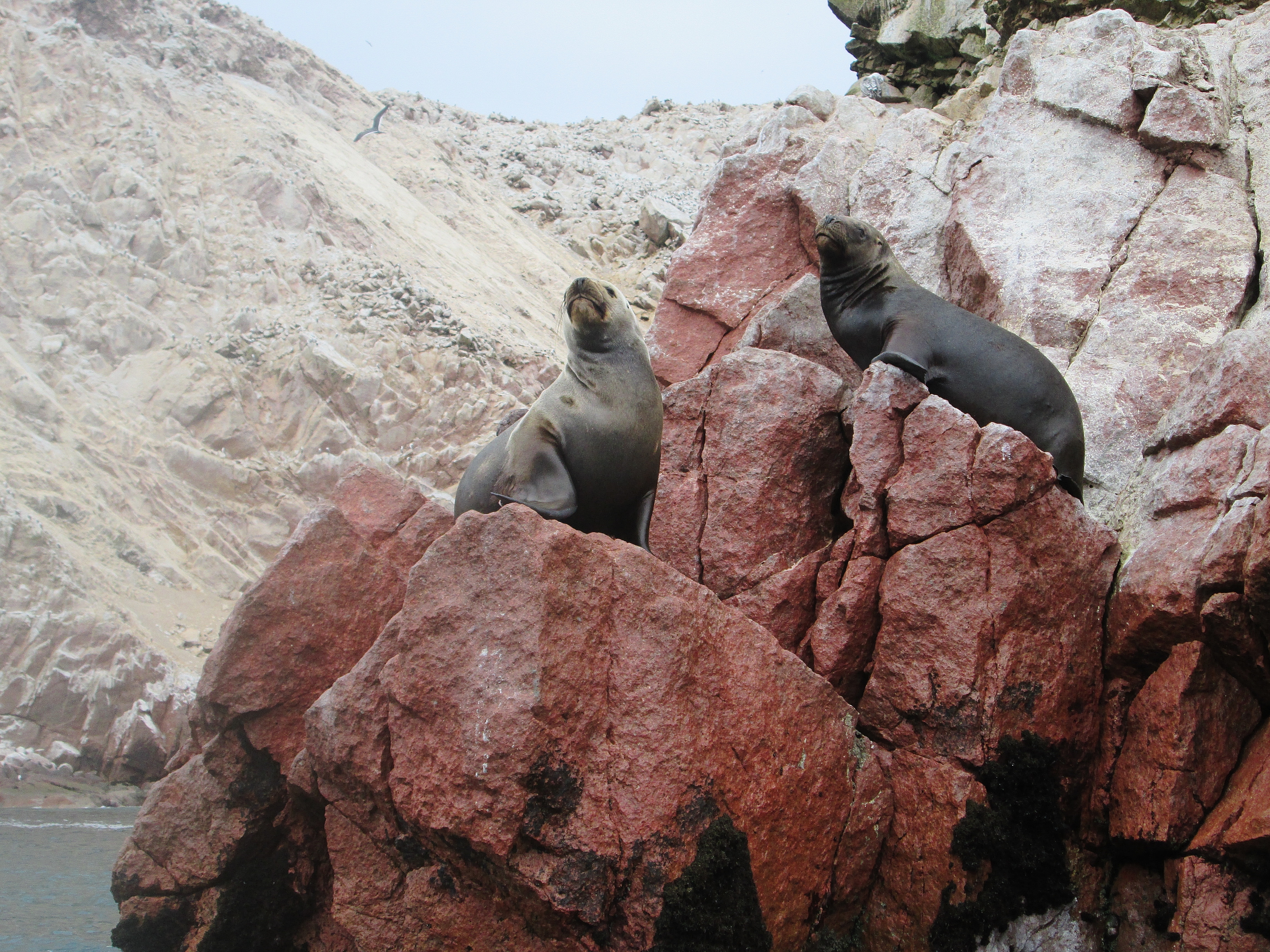 Sea lions on the Islas Ballestas.

Then you’re off again, but you won’t have seen the end of sand as the next stop has to be the desert oasis of Huacachina. Popular with wealthy Limeños in the 1940s for the water’s supposed healing properties, the town is now another booming backpacker favourite, despite its local population only numbering around one hundred. Whilst there you can’t afford to miss the opportunity to take a dune buggy into the surrounding desert – or trek up the sand mountains yourself – and sandboard back down, not before taking in the sunset at the top. It can also be a handy base from which to organise tours of the local (in South American terms…) Islas Ballestas and Nazca lines, if you’re short on time. Don’t expect an authentic Peruvian experience, but you will at least get a few days of relaxation and plenty of banana pancakes to enjoy in your own inland coastal paradise, complete with an international nightlife not to be sniffed at. 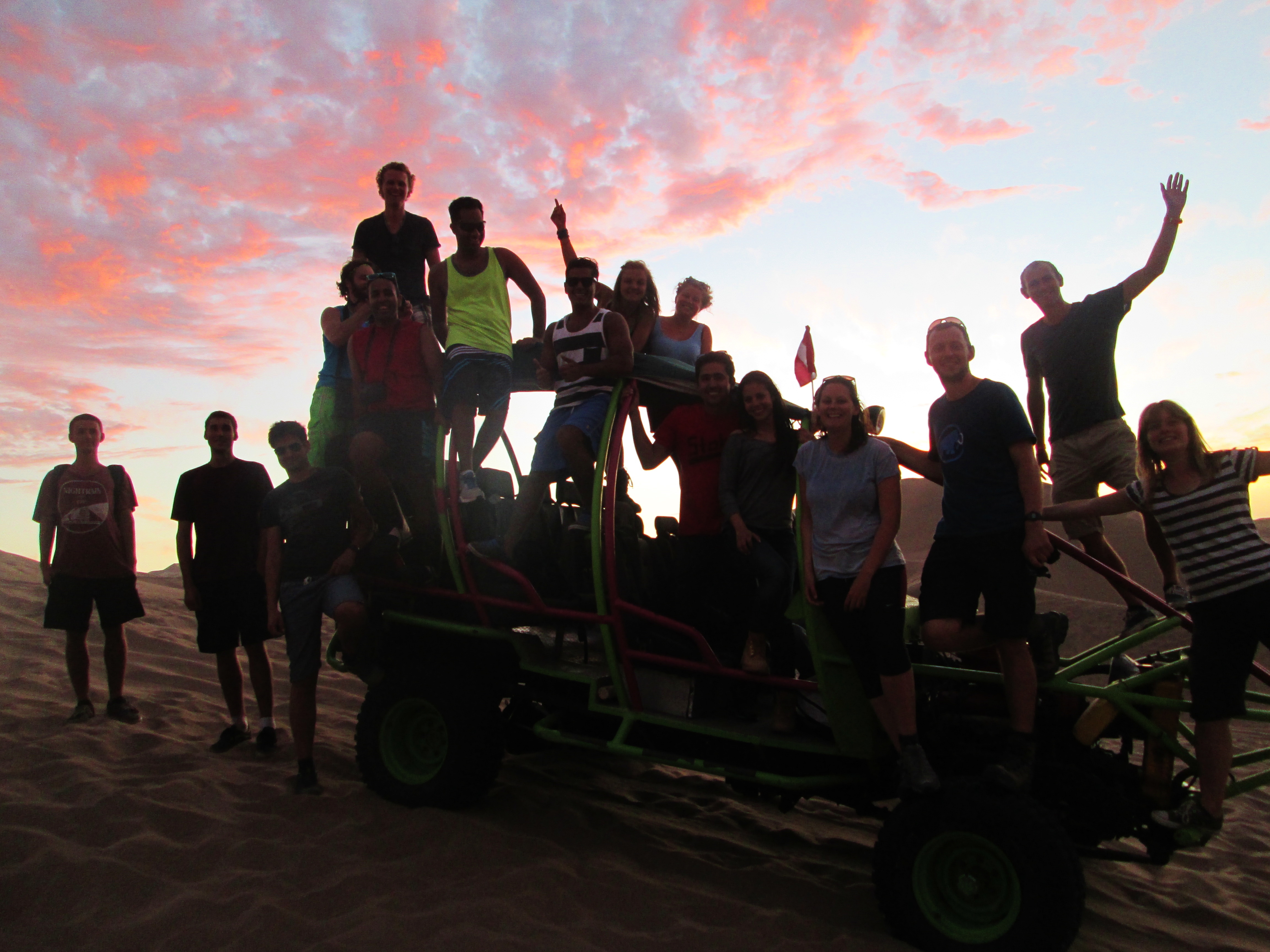 That Peruvian experience can, however, be more than made up for at your next destination, a 1500-year-old UNESCO World Heritage Site: the Nazca Lines. Here, hundreds of ground markings form shapes ranging from the geometrical to the zoological – even including what appears to be an astronaut – in an extraordinary feat whose reasoning has been attributed everywhere from the astronomical to the theological. You’ll get the best view by booking a flight, but be careful to go with a reputable company as there have been a number of fatal accidents in recent years. It’s also not recommended for the easily nauseated, as you’ll be in for a bumpy ride in a very small plane!

Once you’re back on solid ground again, most people leave Nazca at the first opportunity, with the dusty desert town itself not thought to offer a lot else to tourists aside from its star attraction. If you have the time to stick around though, you can’t go wrong with another dune buggy ride. Be prepared to ruin your hair as you’re treated to a whirlwind tour of the region’s other historical treasures, including ancient pyramids and aqueducts. You’ll even get another chance to perfect your sand boarding at the end of it! 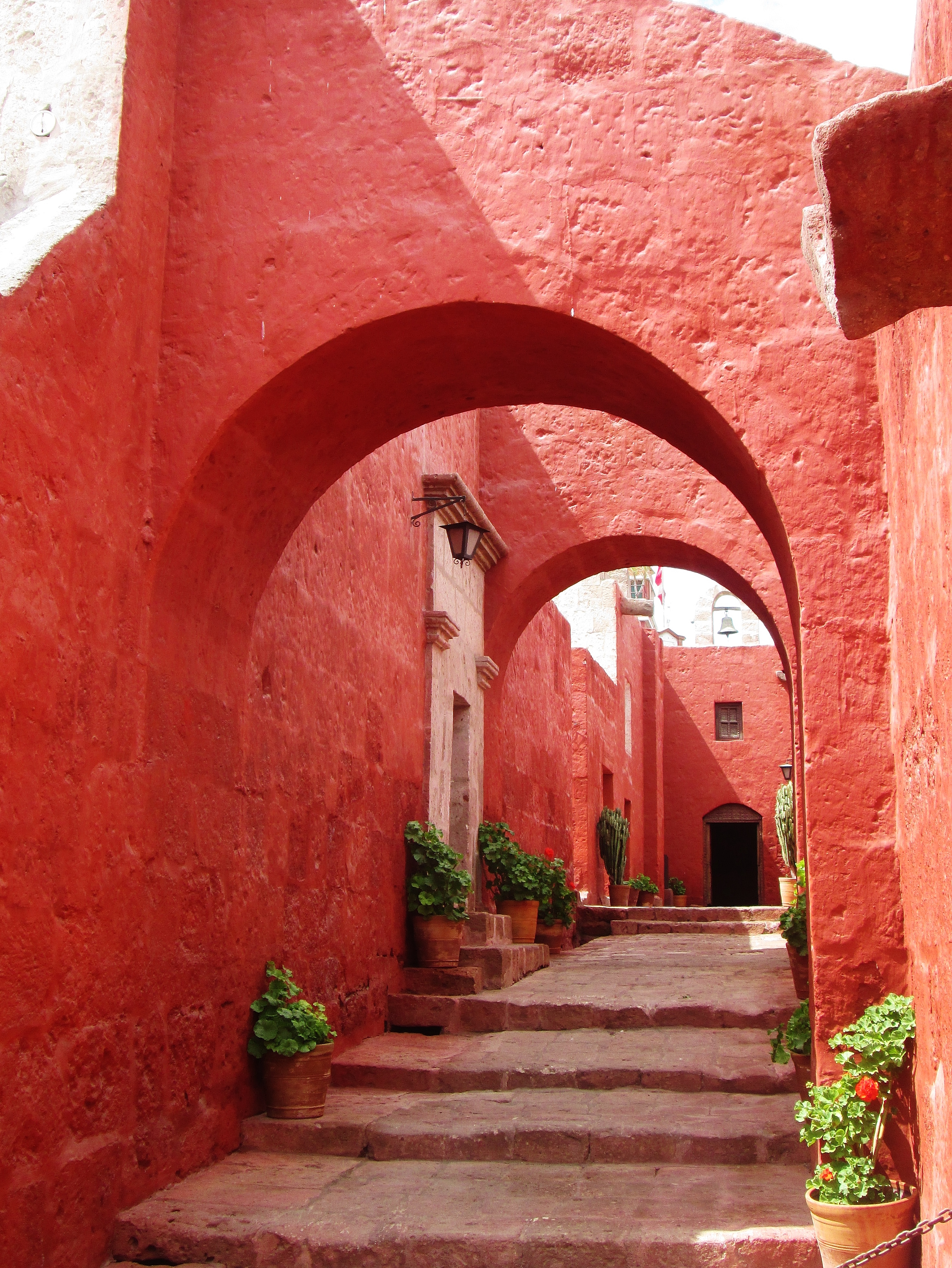 And then it is time to finally arrive in one of Peru’s renowned urban centres. An overnight bus east will take you to the legendary region of Arequipa, which houses a staggering number of natural and archaeological sights. Lying in the shadow of the mystical, snow-capped volcano Misti, this city is the country’s third largest and former capital and it shows, with international food and colonial design sitting happily alongside remnants of ancient cultures. Its heart is the arched and fountained Plaza de Armas, with the surrounding careful grid of streets spreading out to become its historic centre. Don’t miss the Santa Catalina monastery, a ‘city within a city’ that you’d need to dedicate an entire day to if you wanted to do it anything like justice. Another unmissable visit is the impressive Museo Santuarios Andinos, where student guides from the university lead you on a tour of the museum before you are invited to see the eerie Juanita. This Incan 12 year old was sacrificed to the gods on the Nevado Ampato mountain over 500 years ago, with the subsequent freezing of her body in the snow preserving the ‘mummy’ astonishingly well. Not a sight for the faint hearted.

Arequipa is where stage one of our journey ends, but there is far more in store in part two, as we explore some of Peru’s most stunning hiking trails and finally reach the doorstep of the nation’s ultimate icon: Machu Picchu.