Save states in retro games – cheating or not?

If you grew up with the Animal Crossing games, and in particular Wild World, you will remember that saving your game was a matter of life and death. If your Nintendo DS ran out of battery, or (God forbid) you just turned it off for fun, you’d be greeted by an angry mole, Resetti, who insulted you and forced you to realise the grave error of not saving your game until he was placated, and left you alone. 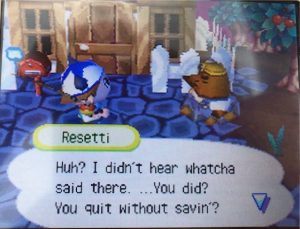 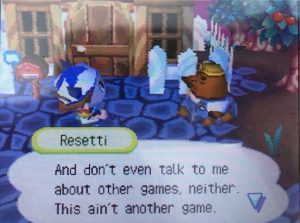 Thankfully, most other games do not make such an event out of it, and saving is a feature in modern games that we often take for granted. Many older games had no save system whatsoever — in the early days, throughout the late 1970s and 80s, home console gaming was still influenced by the arcade way of life. You don’t save in a high-score based arcade game: you just play until you run out of change. 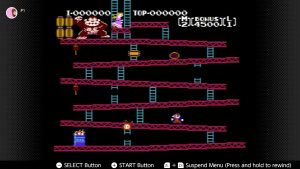 The NES version of the arcade game Donkey Kong

Some games on early home computers allowed for saving, via the use of floppy disks, but for cartridge based systems, like the Nintendo Entertainment System, it was a completely different story. Having said that, it initially wasn’t needed — a lot of early NES games were not long (making it feasible to complete the game in one go). The real value was in how much you could replay it. Super Mario Bros., for example, is a short and early NES title, but you replay it to discover new things or to improve your skills. 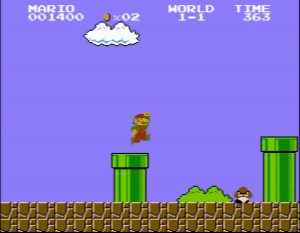 Some games, however, are a bit more complex. The cartridge of the original Legend of Zelda, a game focusing on adventure, included a battery that allowed for progress to be saved. Other games, such as Metroid, featured a password system–you’d write down a 24-letter password when you got a game over, and then enter it on the ‘continue’ screen to carry on from where you left off. Passwords are a faff, but the battery system has its own problems (games using batteries warn to hold down the reset button when switching off the NES, or you may lose your saves). Interestingly, the Japan-only Famicom Disk System, an add-on for the Famicom/NES, used disks (unsurprisingly) instead of cartridges, and the versions of Zelda, Metroid and several other games made for the FDS could be saved without the use of a battery or passwords. 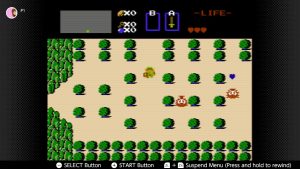 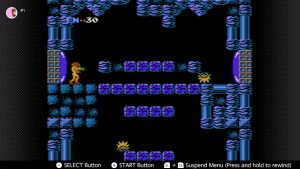 Some games, however, still had no save feature whatsoever. Mega Man is like this, meaning that you’re expected to – you guessed it – play the whole game in one go (I suppose you could leave the console on indefinitely, but that’s probably a bad idea for several reasons). Regardless, Mega Man 2, releasing a year later in 1988, included a password system, and this was cited as an improvement. Mega Man and games like it were intended to be played a certain way, but modern re-releases usually include save states, which essentially take a snapshot and allow you to retain your progress, should you need to stop playing. Even a purist might not have a problem with that. Is it not the same as leaving the console on and returning to it later? But what may be perceived as an issue is saving the game after certain points, even during a level, and reloading that save if you die subsequently. That also wasn’t in the original game, but that seems more like a sin. 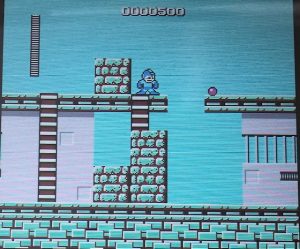 And this brings us to the central question: are save states, in modern versions of retro games, cheating?

Well, the short answer is yes. But it’s excusable.

Look, I’m not a fan of cheating. I was a very cautious child, and to this day I’ve never really dabbled in cheat codes and the like (but obviously I’ll watch them on YouTube – I’m not some sort of Puritan).

Whether or not using save states counts as ‘proper’ cheating really depends on what game you’re playing, and what you want to get out of it. A lot of modern platformers, for example, allow you to continue from your last save, or the beginning of the level you died in. The consequences of dying aren’t so dire. 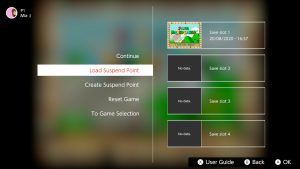 Save states, or suspend points, on SNES Nintendo Switch Online

So when you compare these games to older platformers–like Mega Man, and also the first two Sonic games, despite the latter releasing in the early 90s–the difference becomes obvious. If you die, you start over… unless you’re playing a re-release (like the Sega Ages version of Sonic) that allows you to use save states. Especially in a game like Sonic 1, with its often frustrating level designs and enemies (hello, randomly appearing spikes and water levels!), you can often feel like the manner in which you lost your last life was, well, a bit unfair. But if you save when you finish a Zone, or maybe every few Zones, that stress is taken away. 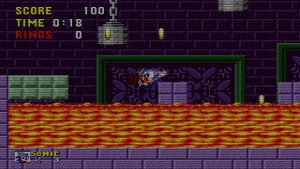 However, you can argue that you’re not beating the game fair and square. While the original Sonic had a cheat code that you could plug in from the title screen, allowing you to commence play from any level in the game, it was just that – a cheat code. And though you could use it for less nefarious means (for example, if you absolutely couldn’t finish the game in one go), there’s nothing stopping you from dying in Labyrinth Zone Act 3 and resuming play again from the beginning of Act 3, instead of going back to the very beginning (meaning you have to play through Marble Zone again, an area currently on a shortlist to qualify as one of the circles of Hell). You can use save states in the exact same way. If you’re using the code or the save states just to pick up from where you left off, you might argue it’s not cheating at all. 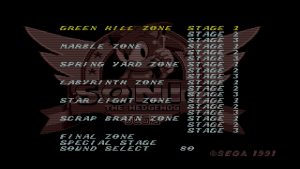 But the game was made to be played in one go. Doing anything other than that simply means that you’re not as skilled at the game as someone who had to play sections multiple times to get through it in one sitting – even if your intentions are good.

However… what if you’re not one of those honest few? What if you’re a savescummer? This is generally considered an abuse of save states, not just in retro games but in modern games too: saving perhaps too frequently, and reloading when things go wrong, whether it’s before a difficult section of platforming, or before a boss fight. And it’s so tempting to do that, because not everyone likes beating a tough section only to die and have to do it all over again. Some see it as a challenge–others see it as a pain and a waste of time. I suppose it’s both. But as I said before, replaying those sections forces you to just get better at the game, which is something you don’t get if you only play through sections as many times as you have to. 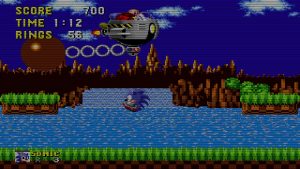 The boss of Green Hill Zone

On the other hand, many people don’t have the time, or indeed patience, for that. And that’s why I said it depends on what you want out of the game. If you want to beat a tough retro game by any means necessary, then use save states! While beating a game as originally intended has its advantages, standards have changed. The introduction of save states highlights an outdated feature of retro gaming, and the inclusion of cheat codes (like the Stage Select code) even suggests that the game was perhaps a little unfair even when it came out: so why not apply modern standards to make things a bit fairer and easier, if you want to?

After all, being overly concerned about the right and wrong way to use save states, and looking down on people who do things differently to you, makes you kind of like Resetti. And I wouldn’t say he’s a brilliant role model.