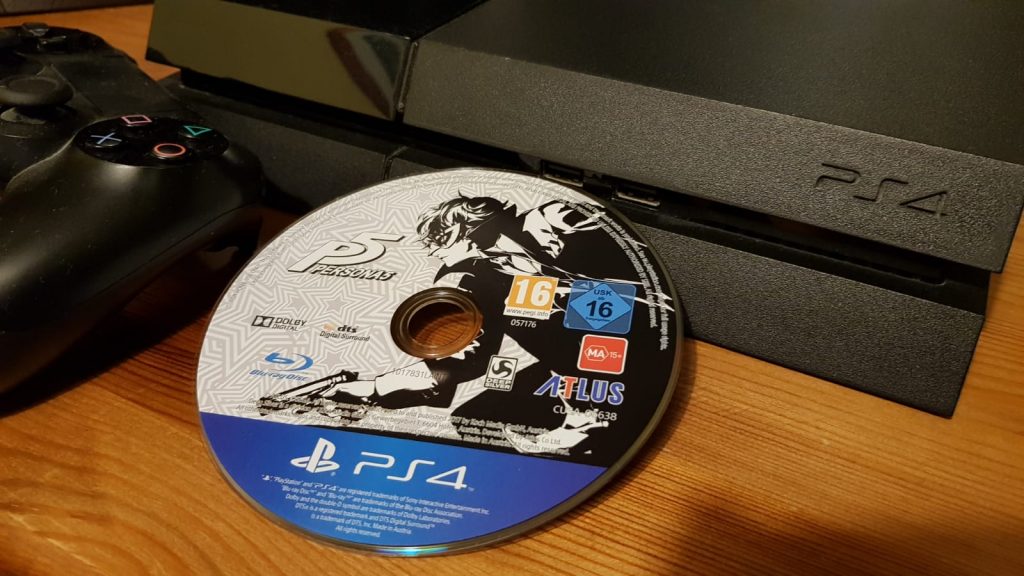 My copy of Persona 5.

This is Part One of my Persona 5 review! This part is as spoiler-free as possible.

I completed Persona 5 over the summer and I have a LOT of thoughts on it. For those who don’t know what this game even is, I will try and do a quick summary.  Persona 5 is a JRPG belonging to the Shin Megami Tensei series, and is, as you might have guessed, the 5th game in the Persona series. You’re a high school student (as is every other Persona protagonist) who also leads a double life as a ‘Phantom Thief’, stealing the twisted desires of the various evil people you meet over the course of a year, from their ‘palaces’, or dungeons. You, and your party members, all have a unique Persona, a sort of manifestation of your rebellion against the wrongs of society, and these are used to fight the enemies, called ‘shadows’, in the palaces.

My first playthrough was 130 hours. I didn’t even see everything in the game!

It’s almost ridiculous how long this game is. But, it was for the most part an absolutely brilliant experience. Anyone who knows me also knows that once I start talking about Persona, I will not stop, so I’ll try not to make this EXCESSIVELY long.

So, the best way I can describe Persona 5 is as a fantastic game that is not without flaws. For example, it has a lot of content, good content, but perhaps to the extent that it can be overwhelming. This seems like a good opportunity to discuss the time management aspect of the game, a recurring feature in the later Persona games (I’m not so sure about Persona 1 and 2). It should be said that Persona 5 is generally seen as more forgiving in terms of being able to max out all confidants (or the bonds you make with people, with each person being assigned an arcana) than Persona 3 and 4, but I don’t think that should be your focus in your first playthrough. You’ll want to focus on maxing out your personality stats (kindness, guts, knowledge, proficiency, and charm) instead, so in your New Game Plus playthrough, those stats will carry over and you’ll have the time to max out confidants you might have missed out on last time (since confidants do not carry over). You’re limited in your first playthrough by these stats in two ways: firstly, you’ll be spending time carrying out activities that raise these stats, such as studying or working a job, and we all know there’s only limited time in a day, so you’ll often have to choose between spending time with people and turning yourself into a well-rounded, likeable person. Hey, Mr Popular needs a personality, after all.

Secondly, some confidants have a barrier either at the start or partway through (since there are 10 confidant ranks before that confidant is maxed out), where a certain level in a personality stat is required. In New Game Plus, however, you should have all your stats maxed, so you can start confidants as soon as they become available.

This game has so much content and so much you can do that the aforementioned time management (since you’ll want to get as much out of the game as possible) can become slightly stressful. The network feature, which allows you to find out what other people did on the same day, definitely helps to alleviate this, but still, there’s always an element of having to decide exactly what it is you want to do. This isn’t a complaint, since it’s more down to the fact that this was my first Persona game, so I wasn’t too experienced with the strict time management aspect of these games.

However, a fairly major gripe that many people, me included, have with this game is the pacing. It’s mostly alright, despite the game being exceptionally long, but really I think the game would have been absolutely fine, even better, with one palace removed, or maybe even shortening the existing palaces, perhaps adding in more mini boss fights to keep things interesting. Despite this, (I’ll be vague because we’ll be in quite heavy spoiler territory) I wouldn’t change the fourth palace and I wouldn’t change the sixth palace, because the themes and concepts of both are fantastic. The frustrating thing about the fifth palace in particular is the fact that it’s so lengthy, and yet the character it revolves around gets a pitiful amount of screentime. Changing around the palaces slightly would help to improve issues like this, where characters end up feeling underdeveloped.

Having said this, all of the confidants receive most of their character development through actually ranking them up and seeing their own individual plotlines, and luckily the character who misses out on development as part of the plot gets quite a good confidant story. Though the confidants are pretty much optional (save a few that rank up as the game’s plot progresses), you’d be missing out on a lot of Persona 5’s charm if you just ignored everyone. I only really disliked one particular confidant because she texted me so often that I started to actively choose to hang out with anyone BUT her. The rest were either good (though a few had a habit of the focus moving away from the confidant themselves, which was a bit of a shame) or exceptional.

So that was Part One of my review/thoughts. Part Two is coming next week, opening with some confidant spoilers, so you might want to skip that first bit if you haven’t played the game! I can’t imagine my overall opinion on the game being too much of a shock…