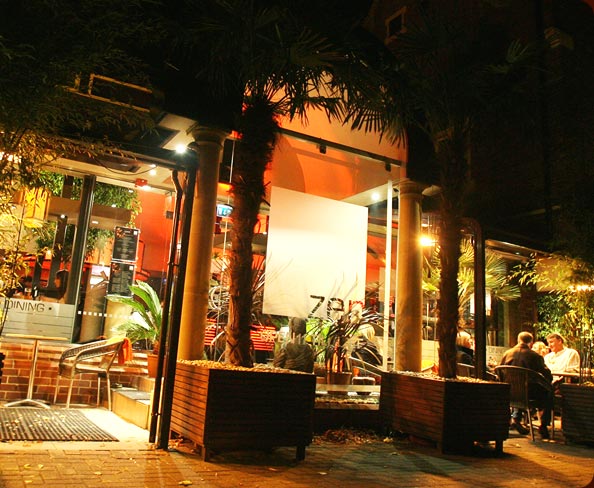 Zen is a surprisingly unutilised eatery for the students in Durham. After each visit I have made, I have returned raving about the great atmosphere and exceptional ‘Thai-Asian’ cuisine, but am usually met with an ambivalent response. “Oh? I’ve never been there”, or, “Zen – where is that?”. I can offer two possible primary reasons as to why Zen has not become the number one choice for dinner, as it potentially should have done if we are only to take the standard of its offerings into account. Firstly, its conspicuous location: Set back from Old Elvet, it is hardly positioned ideally for walk-in trade. You really do have to search for it a little. Yet since it is opposite the favourite student jaunt The Court Inn, and just a minute either way from Elvet Riverside and Claypath, there really is no excuse. Secondly, the prices are higher than the regular meal out in Durham. With mains averaging at £16, Zen (a sister company of Gadd’s Townhouse boutique hotel and Tango burger restaurant) is admittedly more suited to a special occasion than as a mid-week treat. Yet after eating there, I can confirm that the prices are fully justified. The quality of the food cannot be disputed and the portions are large, so there’s no way you’ll be hungry enough to need a dessert: there’s £5 saved already. It must also be remembered that rice or noodles are included in the menu prices, avoiding that sneaky habit which many oriental and Indian restaurants have of offering main dishes that appear remarkably cheap, causing the customer to forget about the fact they have to pay an additional £3 or more for side dishes.

On entering Zen, one’s expectations are immediately heightened. From the décor to the sleek tableware and cutlery, the whole place oozes class. Yet Zen in no way feels snobbish or alienating to a student customer. On the contrary, the special touches provided mean that the establishment feels positively welcoming: cushions adorned out booth table; there are heaters and blankets to add a touch of warmth to the outdoor terrace in the chilly Durham weather; oriental inspired luxury-branded hand cream was provided in the toilet. We visited on a Friday night, and the overall atmosphere was buzzing, with almost every table occupied. In spite of this, we never felt neglected or had to wait longer than desired for food. In fact, the service was exemplary. The waitress rushed to remove the condiments from the centre of our table after noticing we were struggling for space when our sharing starter arrived, and our glasses of tap water were filled up quickly whenever we were running low. At the same time, the service remained unobtrusive – there was thankfully no feeling of being rushed, as is common in some oriental eateries, and would be particularly understandable considering the packed restaurant. As the meal went on, the room could feel a little too noisy; although overall I felt that this contributed to the lively mood. My only complaint would be the temperature: it got rather hot in the more enclosed back section we were sitting in – obviously worsened further by our spicy food!

Aaah… the food. Zen’s menu is both expansive and original. A lover of Asian food, I found it extremely difficult to choose from the temptingly-named dishes on offer. I resolved that I would definitely need to return another dozen times at least to try out everything I fancied. I wish! Although Zen self-identifies as a Thai restaurant, I found the menu to be broader than your average Thai; hardly limited to your standard green and red curry, there were also offerings from Taiwan, Vietnam and Singapore to name but a few cuisines. Not that I am complaining about that mis-labelling; if anything, Zen under-sellsitself. The huge variety on offer makes Zen a great choice for both lovers of oriental food wanting to try something a little different and those who prefer something less spicy, especially thanks to the informative menu descriptions. There is a good mixture of creamy, curry-based dishes and wok-based noodle options. It was also refreshing to see the privileged position of pork and duck, along with a variation of fish, instead of the usual ‘any curry you want as long as it’s with chicken, beef or prawn’. Each dish seemed to have its own identity, instead of offering the same dishes repetitively with different meats.

We plumped for the ‘DIY duck’ to begin with, and not being able to resist the other temptations, a portion of veggie spring rolls. Whilst I personally prefer traditionally shredded duck, the chunks of duck with which we were presented were tender and tasty, in just the right proportion to the number of pancakes. There was enough to generously serve four, making the £10.50 price tag very reasonable value; it was only a little more than you would pay to prepare yourself from M&S or Tesco. Thankfully, the spring rolls were also worth the indulgence; unlike many rather mass-produced and synthetic equivalents, each fresh ingredient could be seen and tasted.

Then onto the highlight: the main courses. After much deliberation, I opted for the charmingly titled ‘ginger pig’: braised pork, vegetables and thick udon noodles in a sticky barbeque sauce. I was not dissatisfied. There was an abundance of pork, and the noodles were fresh and tasty. I was almost outfaced by the large portion; the menu’s claim of ‘oodles of noodles’ was no exaggeration. The food was so delicious, however, I devoured the lot with little effort. Two of my companions opted for the curry pots, served with rice. These dishes were innovatively and beautifully presented, with domes of rice revealed from underneath a bamboo pyramid on presentation at the table! Whilst here the portions looked a little smaller, the bowls the curries were presented in were deceptively deep, and since the sauces were so rich, any more would have been excessive. The nonya chicken curry contained a flawless balance of spices, and again all the ingredients spoke for themselves. Unlike a variation on that dish which I have previously tried, the tang was more subtle than it was overpowering. The chicken was tender and moist, and the sauce just the right consistency: not too thick and stodgy to be absorbed by the rice, but a far cry from being thin and watery. And the rice – the true indicator of a good oriental restaurant? You guessed it, cooked to perfection. After a sneaky taste of each dish, however, my favourite would have to be the satay chilli chicken. A world away from your average, over-salty satay chicken, this version was smooth and luxurious. The creaminess of the sauce provided an impeccable counterbalance for the chilli and peanuts, meaning that there was just the right amount of a kick from the spice. A sample of this curry truly wasn’t enough, and I was left hankering for more.

Too stuffed to even contemplate a pudding – though the selection, including sticky toffee pudding, did seem more appealing than the usual Asian offering of fried bananas and ice cream – we left Zen feeling that, although we had paid more than average for a meal out, we had got excellent value for money. I can’t remember the last time I had anticipated a meal so excitedly, and was totally satisfied with the reality. If you are looking for somewhere in Durham for a special meal – to impress on a date, if the family are up or for a celebration – then Zen should be your first choice. You won’t be disappointed!