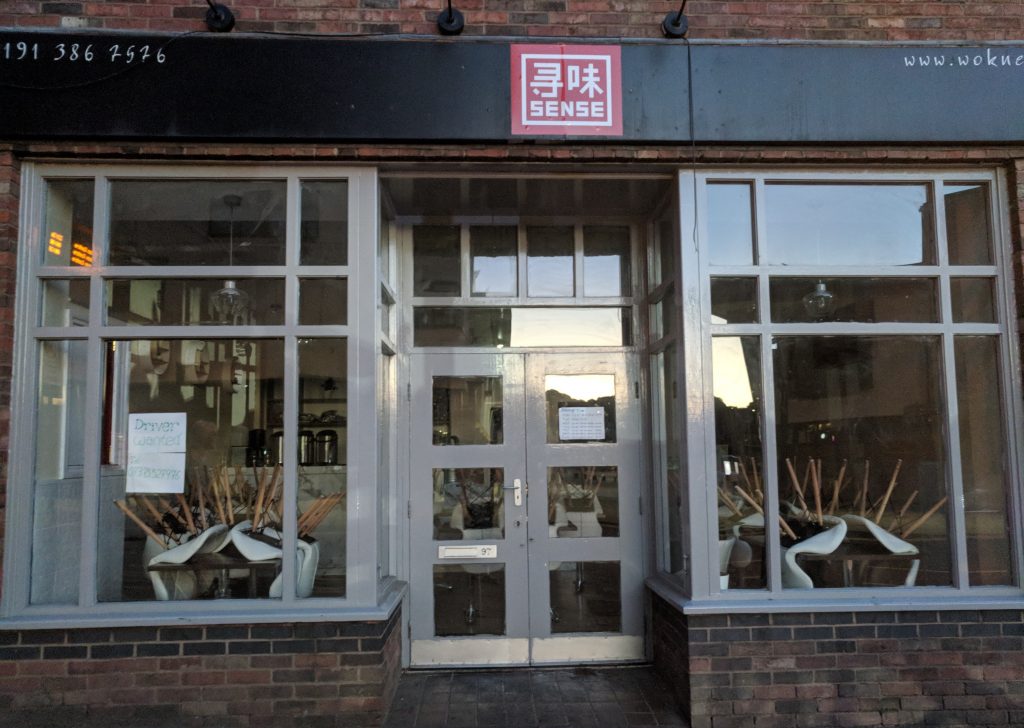 We recently made a weekend lunchtime trip to Sense, the Asian café which replaced Wok Next? over Easter, to see if it could come good on its promises of providing authentic Chinese cuisine and some new competition for the other restaurants in Durham whose approach to cooking is more pan-Asian. I must admit that this was not the first time I had eaten at Sense; I visited soon after its opening. That time, the food was good, but the service was mind numbingly slow, despite there being seven front of house staff. However, given it was early days, I felt it unfair to review it at such a time. Hopefully, after a few weeks, I thought, such issues would have been ironed out.

I was quite surprised that we managed to get a seat immediately, as whenever I have walked past it has been completely full, with queues out of the door. The décor is simple, the atmosphere relaxed. The café is only small, but it is light, bright, and airy. They had cut down on the number of staff this time to just two. One worked behind the counter, which left just one overworked waitress for the whole café. She brought us our menus and left us to it. There was a large selection of dishes, with perhaps ten or more items for each type of meat (beef, pork, chicken). However, the vegetarian options were limited, and it was very odd to see shrimps listed as an ingredient in one supposedly vegetarian dish, beef in another. Other vegetarian item descriptions included phrases such as ‘with traces of meat’, which would make the dishes… well… not vegetarian.

We began by ordering various iterations of bubble tea, expecting them to arrive just before we ordered (bearing in mind Golden Pearl on North Road makes them in about five minutes). They did not. We placed the rest of the order, and most of the food arrived within fifteen minutes, a vast improvement on the first time I came, when it took over an hour. I’d love to tell you the individual prices of the food (all around £9 – £11), and their exact names, but I didn’t take a photograph of the extensive menu, and the website strangely does not have one. We ordered four dishes between us, alongside special fried rice and two bowls of plain rice. The portions are large, and so well worth sharing in a group. First was lemon chicken, which was perfectly crispy. The sauce was just the right consistency and was neither too sweet nor too bitter. The chicken could perhaps have been a little more tender but overall the dish was very good. (But still no sign of the bubble tea). Next, we tried the seafood soup. It didn’t look the most appetising, and it was rather flavourless. I’m unsure what fish was in the soup, but  I was surprised by quite how much there was. (I would have quite liked my bubble tea at this point, but oh well). 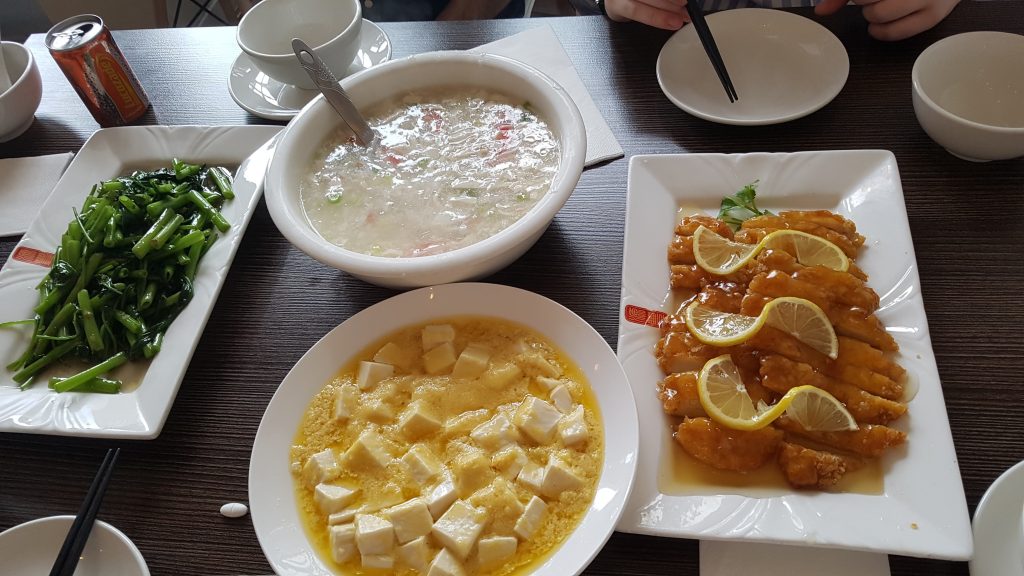 We then had the stir-fried Morning Glory (water spinach), which, slightly crunchy, with a hint of vinegar in its sauce, was delicious. This was accompanied by duck egg tofu, which is an acquired taste. I personally enjoyed it, as it is unlike any other British dish I have eaten, though other members of our table were less impressed. It was quite salty, and the egg and sauce lent the tofu, very often bland, a powerful flavour. I would have liked to wash down this dish with a refreshing bubble tea, but alas… it still hadn’t arrived. We accompanied these dishes with special fried rice, which was some of the best I’ve eaten, and which contained huge amounts of shrimp and ham. We had also ordered two bowls of plain rice. However, by the time our bubble tea had arrived after a fifty-minute wait, we had almost finished our food, and there was still no sign of the rice. We therefore cancelled that part of the order. However, this was not too much of a problem, as we were already quite full from the rest of the meal. The tea itself was rather average and scarcely worth the wait.

Overall, Sense provides very good authentic Chinese cooking, and is a strong competitor for the other Asian restaurants in Durham. It is however let down by slow service, and we felt sorry for the waitress attempting to serve every table. The restaurant management need to strike a balance between too many and too few staff; I am sure that with just one more server, drinks would come more quickly, and there would be less pressure on the other staff member. I am unsure how the kitchen might get plain rice to the table on time though. Surely it is one of the easiest, quickest, and most ordered dishes in the café? Perhaps the situation is different during dinner service. Anyway, try the café, but don’t order the bubble tea if you want to be served quickly.