To avoid spoilers, all images have been taken from Horizon: Zero Dawn

Horizon: Zero Dawn captured our imagination from the moment of its reveal trailers and continued to do so after its release. A beautiful world filled with unique tribes who fight with sword, spear and bow set against a backdrop of a landscape teaming with sci-fi robotic machines. It was a strange concept on paper and yet in execution Guerrilla Games convinced us that this world was worth exploring and could stand out against a market where open-world games are have become very common.

Horizon Forbidden West continues this tradition of surpassing expectations, as it is clear a large injection of time, effort and money has been put into this sequel. Forbidden West is larger in scope and ambition than its predecessor, the world is absolutely breath-taking and its gameplay remains some of the strongest in any open-world game to date. Guerrilla Games kept most of what worked, removed most of what didn’t and the end result is a game that is more than worthy of being considered its predecessor’s superior in most categories. 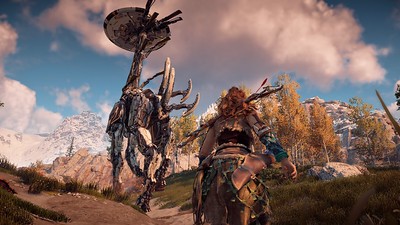 Horizon Forbidden West goes bigger than ever before, but no details have been sacrificed for this expansion in size (Image: Blake Patterson via Flickr with license)

We continue our journey with Aloy, a young woman whose origin story we explored in the previous game. Now, Aloy ventures into the Forbidden West on a quest that aims to save the world and along the way proves herself a capable ally to warring and disparate tribes, building a coalition of allies to aid her in her venture.

With new lands come new machines and the sheer number of new additions is staggering. Forbidden West’s combat remains addictive, with an open approach to combat encounters and enemy design. The spectacle of it all with take your breath away, as you scan enemy encampments and machines to decide your approach carefully. Whether you sneak around and remove enemies one by one or simply charge in head first, both provide challenging but incredible amounts of fun. What other games might consider its climactic final battle, Forbidden West condenses into short bursts that remain just as thrilling throughout your adventure. No two encounters are ever truly the same as the world provides unique arenas. Up on a hill? Shoot some nearby logs and have them do your work for you. Infiltrating a camp? Shoot the gas cannisters and make those enemies disappear with a boom. 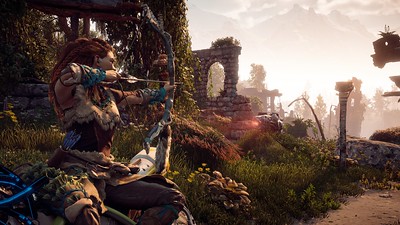 Open world exploration and combat have been tweaked, now allowing for a greater sense of mobility and verticality (Image: Nicolaj Nielsen via Flickr [public domain])

Perhaps one of the game’s strongest aspects is its open world. In a genre where players have been conditioned to turn off their brains and blindly follow a map-marker, Forbidden West instead engages you through its interesting world design and side stories. Incredible amounts of effort have been put into this optional content and at times its quality surpasses the main narrative. Instead of relying on its systems to push you towards your goal, Forbidden West invites you to indulge in your curiosity. Many of its side missions and content is marked on your map, but many of them are not, and the game does not pressure you to engage with anything beyond what the player wishes to do. It is a marvel and proves that open world design can be fresh and interesting if only the right incentive and design is provided. 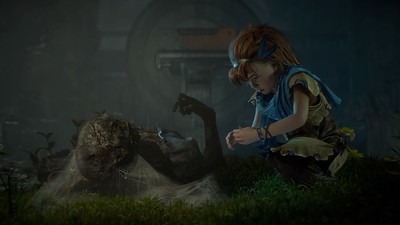 Aloy’s was a humble beginning that grew into something bigger and this sequel sets Aloy up for something even greater (Image: Clinton Crumpler via Flickr with license)

However, whilst I think the combat and the world design is some of the best in the industry, Forbidden West’s story is likely to divide opinions. The original game was Aloy’s origin story, where her mysterious past connected her to the wider conflict that was happening in the world. In her quest to discover her origins, Aloy pieced together what happened to those who came before and unravelled the mystery of the robot apocalypse. Forbidden West pivots this fight into something much larger than Aloy and she must now learn that even she cannot do everything alone. You form a small company of companions who join your cause and remain at your base (aside for specific missions) and they become the heart of the narrative. Some of these characters are returning cast members such as Erend or Varl, but most are new additions from the tribes of the Forbidden West.

Despite the medieval-robotic world, the original game remained quite grounded with sci-fi elements being restricted mostly to the world of the ‘old ones’, those who lived during the 21st century who got wiped out by the Faro machines. Here, Forbidden West relies more heavily on its sci-fi elements and this is likely to be a direction not everyone will appreciate.

The game’s antagonists are also generally more one-note compared to HADES in Zero Dawn, as HADES was a subfunction of the AI that was created to remake the world – GAIA. HADES was interesting because GAIA was interesting. The antagonists here have incredibly impressive scenes, but their impact is lesser as they have little to do with Aloy or GAIA personally. In all, some moments of this story are a bit uninspired and the game does not develop these threads more to provide a harder hitting story. It is still a narrative worth experiencing, but some will prefer Aloy’s original story to this one. 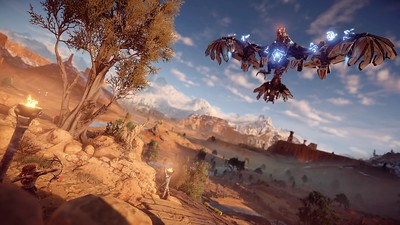 Horizon Forbidden West’s world is a marvel and truly shows the advancements from PS4 to PS5. It is a strong start to this new generation of consoles (Image: Justin Taylor via Flickr with license)

Overall, Horizon Forbidden West continually takes my breath away with its visuals, clever world design, addictive combat encounters and strong side quests. This sequel contains so much love and attention to detail that its clear Guerrilla Games remains incredibly passionate about this franchise. With its impressive sale figures and rather open ended conclusion, a third game is all but guaranteed in a few years. This is also perhaps the first game to truly show the power of the next generation of consoles and sets a strong start for other Sony and Microsoft games to follow. With recent industry shaking acquisitions, Sony lets Horizon Forbidden West make the case for them that the games will decide who comes out on top and this is an approach which lets consumers and developers win.