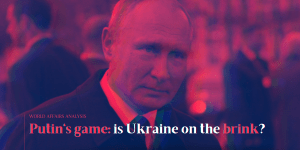 In recent weeks, conflict surrounding the Donbas region of Ukraine has again been the subject of escalation. Yet, although this may demonstrate Russia’s apparent intention to invade Ukrainian territory, this eventuality remains unlikely—however inevitable it may seem. In fact, Vladmir Putin cares less about invading the region than he does leveraging the threat of war to prevent its neighbour from continuing its current campaign of westernisation. For a country of such geographical proximity to Russia, this is unacceptable for Moscow.

In truth, Russia’s justification for the annexation of Crimea, alongside its military intervention in the Donbas region in 2014, was that the rights of ethnic Russians in Ukraine were being infringed upon. To this effect, the Kremlin stressed that parts of the country are historically and societally Russian. For example, in an address on March 18, 2014, Putin argued that Russia ‘was not simply robbed, it was plundered’ when Crimea was gifted to Ukraine by Khrushchev in 1953. Later that year, he expressed in an article that, ‘in Ukraine, millions of Russians live and will continue to live, Russian-speaking people, and Russia will always look after their interests by political, diplomatic and legal means.’ In this way, Putin justified its military action in 2014 by claiming that ethnic Russians were stranded in parts of Ukraine under a hostile, anti-Russian government. 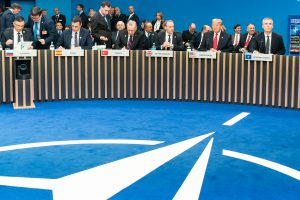 Image One- Russia wants guarantees that Ukraine will be permanently barred from Nato membership.

In 2014, Russia chose not to annex the Donbas region- as it had done Crimea- for several reasons. Not only did Donbas fail to provide the military advantages that Crimea had—it also lacked a similar degree of popular support. More importantly, however, Russia’s attempts to maintain and continue an existing conflict between Donbas separatists and the Ukrainian government has ensured that the latter has remained in a state of suspended conflict. In this way, Ukraine would be disqualified from joining Western structures such as the EU and Nato. This threatens to leave it isolated. For, since the breakup of the Soviet Union, Eastern European states have been steadily integrated into the formal institutions of the West. Crucially, this holds broader geopolitical significance. The only states standing between Nato members and western Russia are those directly on its borders: Ukraine and Belarus. By sustaining the conflict in Donbas, Russia has successfully prevented Western influence from reaching its doorstep.

Putin recently declared that his government would only de-escalate the conflict in Donbas if an agreement were to be made to permanently disqualify Ukraine from joining Nato. This demonstrates that Russia’s real interest is not in invading Ukraine but in protecting its own national security. The threat to invade Ukrainian soil, then, is a red herring through which Russia can manipulate the West into providing it with national security assurances. Whether or not the international community is prepared—or even able—to satisfy such demands remains to be seen. Until they do, however, the Donbas region will remain in conflict, continuing to be used as leverage against the West. Yet, insofar as this state of affairs endures, the real victims will be the people of Ukraine.