What’s the Environmental Cost of the Internet? 6 Ways You Can Cut Your Webprint

The Internet of Things

It is hard now to imagine a world without the Internet and it is inconceivable that it is going to go away anytime soon. The ever expanding so-called ‘Internet of Things’ (IoT) reflects the network of devices that are connected through the internet, from cars to smart fridges and heating systems – an increasing digitalisation of items is becoming significant for the changing patterns of internet utilisation. This, coupled with more and more people becoming able to access the Internet (figure 1), has resulted in questions of how the Internet materialises itself. 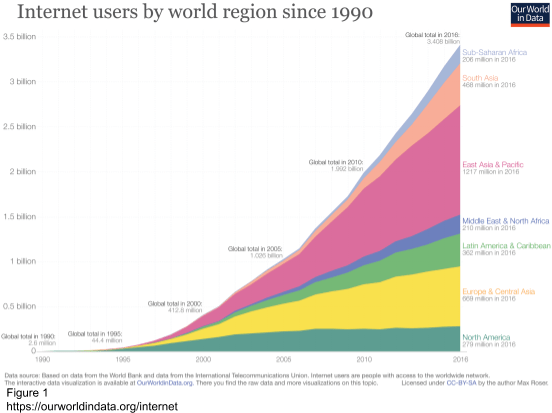 Whilst the Internet remains a completely baffling concept to many of us, understanding its machinations is not imperative to seeing how it changes and affects the environment through the quantity of energy that it both consumes and produces.

The emissions caused by the Internet can be divided into the manufacturing and shipping on the one hand, and  powering and cooling of systems on the other.

The obsolescence rate – that is, the rate at which products become unusual and discarded is thought to be accelerating, further exacerbating the energy cost per unit in manufacturing. The United Nations University stated that in 2016, 44.7 million tonnes of electronic-waste was disposed globally, whilst only 20% of this volume of waste was recycled; this represents a loss of €55 billion in raw materials.

In an estimate by DataCenterDynamics, the collective energy use of all data centres (where the Internet lives) in the world, if it counted as a state, would be ranked the 12th largest in the world – compared with 22nd largest only three years ago. The Berkeley Laboratory Report (2016) suggests that the energy demanded by data centres in the US alone by 2020 they would be around 73 billion kWh of electricity – equivalent to around 10 nuclear power stations.

Such energy costs, both economically and environmentally, present problems to large technology companies such as Google, Facebook, Amazon and the suchlike. Increasingly, companies are taking dramatic measures to improve energy efficiency which could change the energy consumption that is predicted, as well as commitments to renewable energy.

For example, Google claim that their data centres “use 50% less energy than the typical data center” through using “outside air for cooling” and constructing custom servers. Similarly, Facebook have promised to power all their operations, including their data centers “with 100% clean and renewable energy by 2020”.

Looking at the wider context, in Anders S.G. Andrae‘s 2017 article, ‘Total Consumer Power Cost,’ Andre proposed that the ICT industry as a whole could be using “20% of all electricity and emit up to 5.5% of the world’s carbon emissions by 2025”

Nevertheless, the Internet also provides many opportunities to produce new behaviours and practices that reduce carbon footprints and provide solutions to environmental problems. Video-conferencing is emblematic of this as a revolutionary technology that reduces the need to travel all over the world to communicate effectively with someone. The contemporary shift to cloud-based technology is also expected to reduce energy demand by data centres and therefore will help to reduce the environmental footprint of the industry.

How can you reduce your internet carbon footprint?

1 Unsubscribe from unwanted newsletters (every email has a footprint of 4g of carbon dioxide, and around 50g with a large attachment)

2 Choose a ‘green’ search engine, such as Ecosia or Blackle

4 Unplug chargers that are not being used

Therefore, it is clear that we need to reconsider the the misleading image of the Internet that’s perpetuated by names such as the ‘cloud’ and seek to better understand the materiality of the Internet: food for thought next time you’re searching something on Google or sending a Facebook message.

Phoebe Bracken is a student of Durham University and a regular contributor for the environmental section of The Bubble. Some of her articles include, Plastics and Us: How Pollutants in Our Oceans Affect Us, How Many Humans Are Too Many? Where We Draw the Line and Why It Matters, and The Patriarchy and Climate Change.