How Many Humans Are Too Many? Where We Draw the Line and Why It Matters 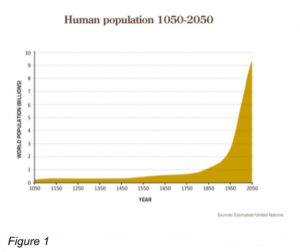 ‘The Population Bomb’ by Paul Erhlich and Anne Ehrlich (uncredited) caught the world’s attention towards the end of the 1960s through warnings of imminent global disasters of Malthusian proportions such as mass starvations directly as a result of rapid population growth. The present population of approximately 7.5 billion is more than double that of 1968 when The Population Bomb was published for the first time (figure 1). Whilst it is easy to mock the apocalyptic predictions of this book, there are many today that retain the view that all our problems of resource scarcity, prolific ecosystem degradation and societal pressures will only be further exacerbated as more people inhabit Earth.

“All our environmental problems become easier to solve with fewer people, and harder — and ultimately impossible — to solve with ever more people.” Sir David Attenborough.

Fundamentally, it is not sustainable, nor possible for 10, or even 5 billion people to live lifestyles like those we enjoy here and in other MEDCs. This imposes a moral question on if we, those enjoying such lifestyles, have the right to deny that to other people. I would strongly argue we don’t have that right. Therefore, it is imperative to plan for a world in which 10 billion people can live fulfilled lives, accepting the inalienable truth that our lifestyles must change, and in particular we have a responsibility, in MEDCs, to lower our consumption on every level (figure 2). 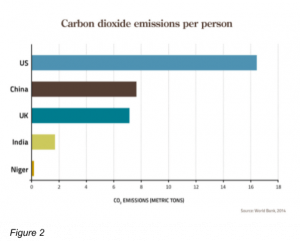 Perhaps the question of ‘how many’ is not the most appropriate one to ask, given the capacity of Earth to support human life is dependent on a diverse range of interconnected systems that function non-linearly. It is also dependent on humans adapt to life in the Anthropocene with more people, including the advent of new technologies in energy production and agriculture. Social structures too are a large consideration, as inequality for example drives unsustainable practices of consumption amongst other things. Therefore, the question of how can we manage our existing issues today is likely the best place to start, in order to prepare for the inevitably larger population in the future, and in particular, how we can change the proportion of the global population condemned to a life of extreme poverty and hardship.

Fertility rates (the number of children per woman across her lifetime) continue to fall globally (figure 3). 46% of the world’s population now live in countries with fertility rates below replacement level (2.1 children) but despite this, population continues to increase, partially because people are living longer. The proportion of people 60 and older is anticipated to increase twofold globally by 2050 and more than threefold by 2100. In Europe this is particularly profound, as it is expected that 34% of its population in 2050 will be 60 and over (UN).

t is also noteworthy that the quantity of physical space rarely influences the number of children that a woman has. Education of women continues to be very significant in reducing birth rates, for example women in Africa with no education have 5.4 children on average, compared to those who complete secondary school who have 2.7 and women who have a college education have 2.2 on average (UN). Migration may also been seen as a tool for naturally decreasing fertility rates and decreasing global population as people tend to take on the fertility rates of the country they move to. Hence, greater immigration to Europe would likely cause a decline in the global population growth rate. 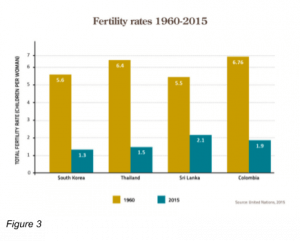 Nonetheless, there remains a significant amount of uncertainty about the future population of our planet, with the most recent estimates by the UN suggest that by 2050 global population will be somewhere between 9.8-11 billion (figure 4). However, such uncertainty about the future should not discourage attempts to influence it as the way we behave ourselves and towards others that is of paramount importance, rather than the absolute number of people. As Danny Dorling says in his book Population 10 billion – the coming demographic crisis and how to survive it:

“Being afraid only gets you so far; being determined moves you forward; being better informed can give you hope.” 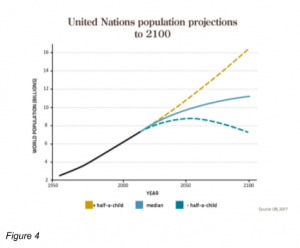 To explore more about this topic, look at the following site:

The recent programme entitled “The Population Bomb” as part of the BBC Free Thinking Festival in Newcastle discusses a range of perspectives on this topic and suggests what we can do about it.