The patriarchy and climate change

The conventional image that climate change brings to mind is unlikely to be one directly associated with the patriarchy or female reproductive rights. Yet in many communities affected directly by the effects of climate change, this is the reality.

For agrarian societies that have experienced absolute poverty for decades, the ever-prolific impact of climate change is further challenging their existence. Unpredictable precipitation patterns are becoming more prevalent, with flooding and periodic drought conflating to produce harsh environments for even the most minimal subsistence. In the 32-year period between 1980 and 2012, Mozambique experienced 24 floods, 12 droughts and 16 cyclones. It is predicted that rainfall will continue to decrease in this region as it has since the 1960s and simultaneously the number of extreme rainfall days will increase by at least 2.6% per decade. Consequently, many families and individuals are desperately seeking to alleviate food scarcity and find alternative sources of income. This is where young girls play their part. 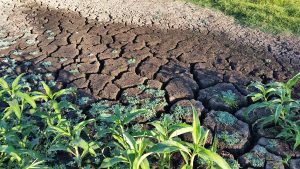 Arid land: this is “what we think climate change looks like”, says Brides of the Sun

Whilst some girls are making this decision for themselves, many are given away by their families to older men in order to reduce the pressure on the limited resources of income and food. Due to the millions of people that continue to be adversely affected by climate change across Africa, the number of child brides is increasing, with the total number expected to double by 2050 to 310 million, according to UNICEF.

Brides of the Sun is a reporting project that has recorded the interviews of some of the child brides in Mozambique and Malawi. In one report, 16-year-old Fatima Mussa from Mozambique tells her story of how she came to be married and nine months pregnant.

When Fatima was 15, an 18-year-old man named Priorina asked her to marry him. Requiring the permission of her parents, her father accepted because he did not have the money to pay for her secondary school and Priorina offered MT 2,000 ($33) for Fatima. Fatima explains that she “didn’t want to get married at such a young age” but felt like she had little power to make a choice: “I had to accept because my father decided so. I married him even if I didn’t want to. I didn’t feel good. Still today, I don’t feel good”.

However, Fatima’s father, Juan Mussa, explains that he too felt as if he had little choice in the matter. He claims he “was struggling to feed the family” due to the rapidly degrading agricultural conditions primarily due to from climate change and unsustainable land use practices such as mining. Consequently, the areas were people once farmed has been transformed into infertile land, due to the increasingly dry conditions. For Juan, this marriage seemed like the only solution in sight, as it appears to be for many other families.

It is important to recognise the pre-existing patriarchal structures in cultures and not attribute the apparent disposability of female children entirely to climate change. Nonetheless, when these two factors are and continue to become exacerbated, it is evident that the such structures become further engrained. Therefore, it is clear that one of the sides of the multifaceted issue of climate change is that of women’s rights and emancipation and, given its prevalence, perhaps will become the face of climate change in the future.

For more information on the subject, Girls not Brides in another organisation that is working to end child marriage