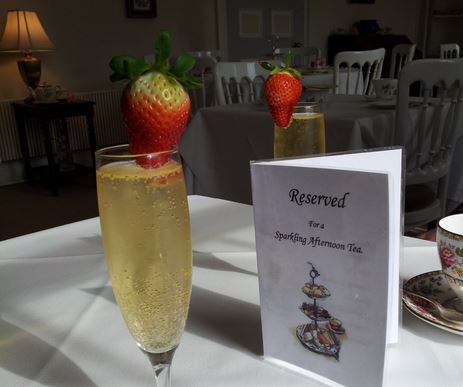 If you are a student you have probably never heard of Crook Hall: I certainly had not before I received an email about it. Yet this charming hotchpotch of a house – located just a short walk from the city centre next to the Radisson Hotel – is undoubtedly one of the nicest places in Durham. Rambling cottage gardens, just awakening from winter, surround an ivy-clad Georgian house with a 13th century hall at its heart. The ‘secret’ walled garden was once visited by Wordsworth and Coleridge and, following in the footsteps of these great poets, Claire Balding and Alan Titchmarsh.

I have come with a friend to try the sparkling afternoon tea, which is served to students and their families at graduation. We are greeted by the door by a friendly lady who leads us up into the Georgian drawing room. We sit next to a window overlooking the garden, with the Cathedral tower looming in the distance as a reminder that we are still in the city. The surroundings are genteel, with white tables decked with china decorated with floral designs, a cupboard lined with old books, and the tinkling of a piano in the background.

After reading through the extensive tea menu, we are served a glass of sparkling wine with a strawberry wedged into its side. The contrast with our usual student existence immediately strikes us, which only adds to the incredibly enjoyable, other-worldly feel of the occasion. When we were walking here I had announced my intention to become a hard-headed food critic, a kind of Gordon Ramsay without the swearing and aggressive knife wielding. However, the arrival of the cake stand loaded with sandwiches, scones, and cuts of cake convinces me otherwise. 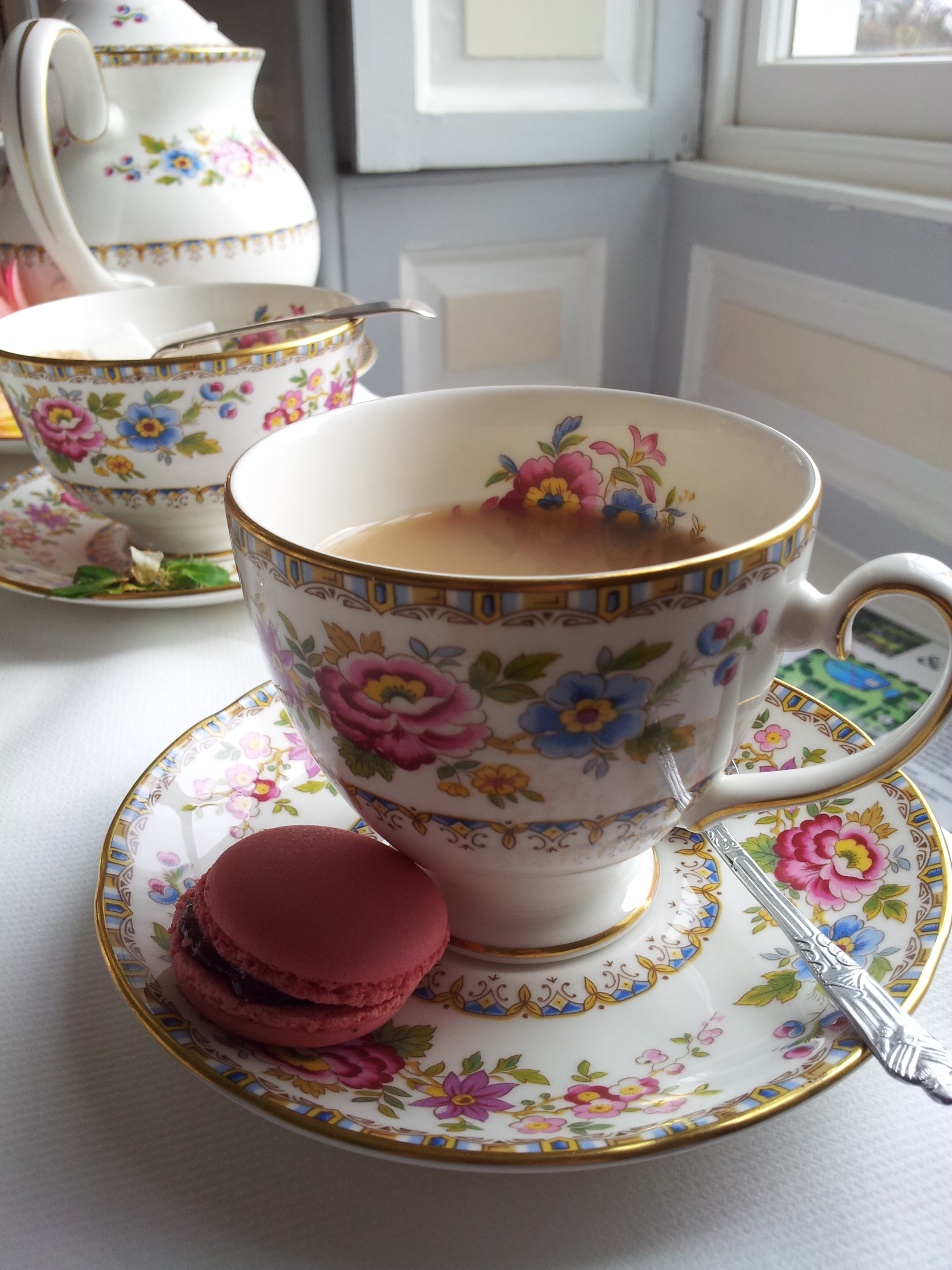 Breakfast tea with a strawberry macaroon

Having poured two cups of breakfast tea, we start with the salmon and cream cheese sandwiches. They come in triangles of soft white bread, crusts removed, with a generous filling. Ham and mustard give way to cheese and pickle, followed by the teatime classic: sliced cucumber. The prawn cocktail is served on small circles of bread, followed by egg mayonnaise in the same style. After we finish the bottom layer of the stand we pause for breath, and then move to the next course.

The waitress had announced that the scones were recently baked in the kitchen, and they certainly tasted like it. They are a good consistency: rich but not stodgy, with enough bite to complement the smooth whipped cream and thick strawberry jam. The final puddings are similarly delicious: ginger cake, strawberry macaroons, caramel shortbread, Bakewell tart, and chocolate eclairs. The pieces are undoubtedly small, but when put together the servings are generous, and we leave feeling pleasantly full. 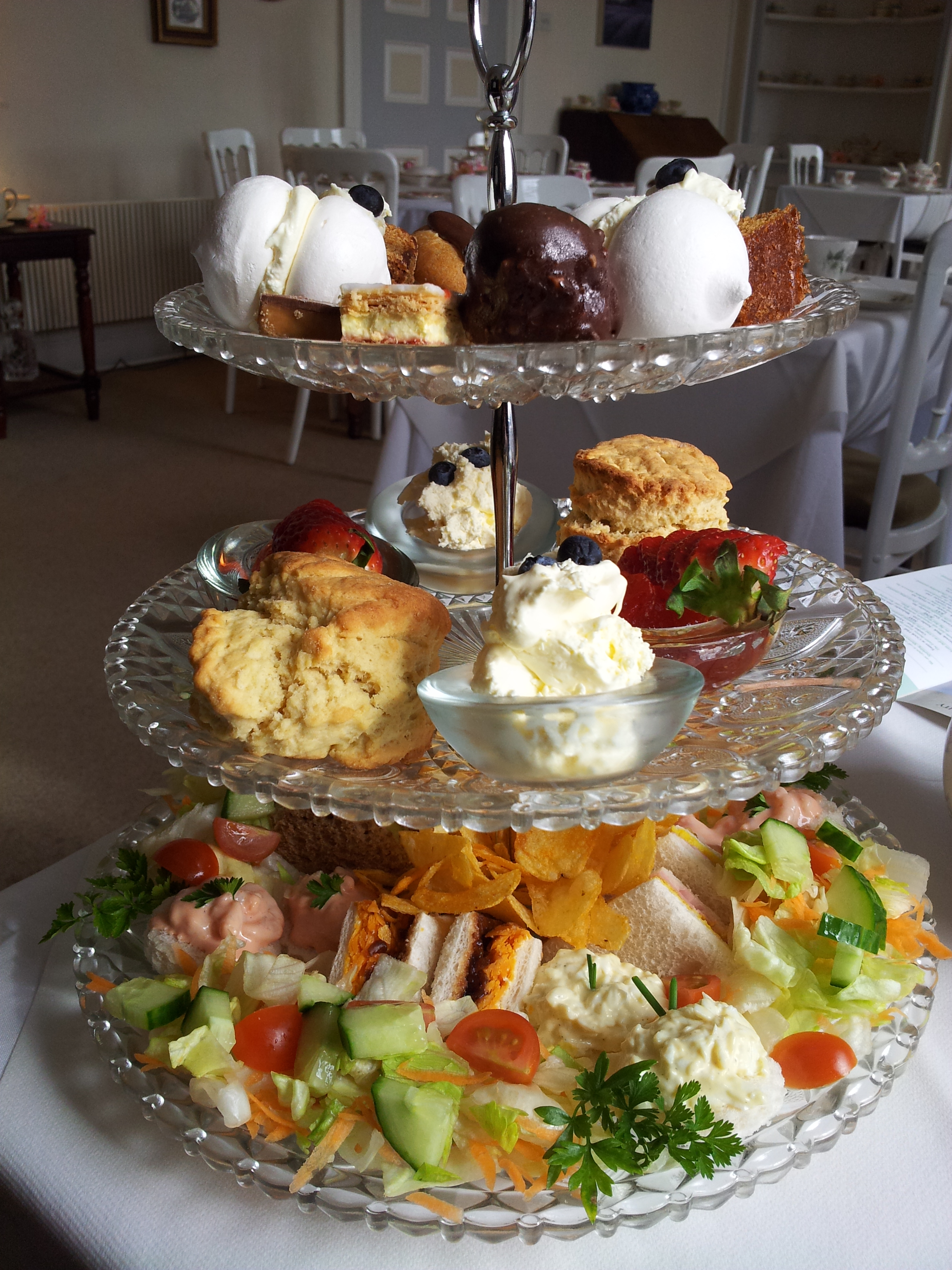 The full spread: the food for two

We head downstairs to explore the rest of the house. The dining room on the ground floor looks fairly busy, while the main hallway gives the atmosphere of a domestic house or boutique hotel rather than a visitor attraction. The Jacobean room is lined with timber beams and heated by an open fire, while in one corner a stone staircase rises tantalisingly just a few steps to where it has been blocked up. A visitor sign says that the room is visited by a ghost known as the White Lady, and a pile of letters written to her by schoolchildren lie at its base.

A stone passage opens out into the medieval great hall, which is undoubtedly the highlight of the house. A strange hook hangs from the ceiling of the stone chamber, which is overlooked by a wooden minstrels gallery. It is not hard to be transported back several hundred years to a time when this hall would have thronged with the sound of feasting – the smell of roasted meats filling your nostrils. Yet the house does not give up its secrets easily: the owners, who became tenants in 1928 after the house had been left empty for a number of years, claim that there is an underground passage that remains unexplored. 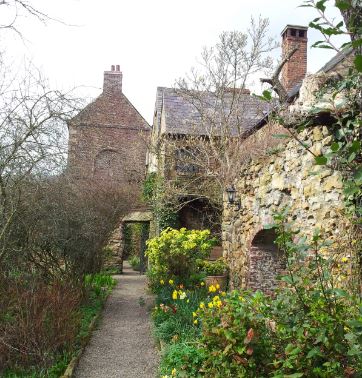 The walled garden, with the house in the distance

As one of the oldest houses in the city, Crook Hall breathes history, and it is really a wonder that so few people seem to know anything about it. The walk from the Viaduct took less than fifteen minutes, and the staff who we met at the entrance – themselves alumni of Durham University – are keen to attract more students. I would certainly recommend a visit to this intriguing corner of Durham.

You can book a graduation sparkling tea by visiting crookhallgardens.co.uk or phoning 0191 384 8028.