Why We Should Care about Water Shortage in Britain 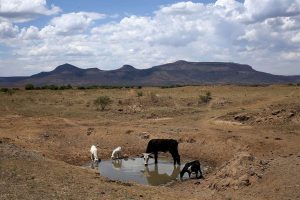 As we patiently walk from our snug housing out into the British weather, we endure the rain, accepting it as a wet fact of life. However, while some of us might scoff at the idea of a holiday in soggy Wales, the seeming abundance of water is something we might be taking for granted.

On February 11, 2018, BBC News posted an article listing ‘The 11 Cities Most Likely to Run Out of Drinking Water – Like Cape Town.’ The article explains our modern water consumption and that ‘of the world’s 500 largest cities…one in four are in a situation of “water stress.”’

While some of the desert locations listed seem more expected, like Cairo and Mexico City, some are less obvious, such as Moscow, or, even more directly, London.

The United Nations World Water Development report suggests that London must find different sources of water by 2025, or the result could be similar to that of Cape Town.

Where does London’s water come from? The majority of London’s water comes from reservoirs fed by the Thames before treatment. London also gains some its water from underground which is the result of all that wonderful rain we endure. But how is it that so much water can run out?

Much of it is due to the growing population and insufficient water conservation practices. With opportunities and the love of city-life enticing new Londoners every day, plus a naturally growing population, water strain is increasing.

What about the rest of the United Kingdom? The World Wildlife Fund wrote in May 2016 that only 17% of England and Wales’ rivers were considered to be at a Good Ecological Status. This means  they are within a problematic level of pollution, which restricts drinking water. 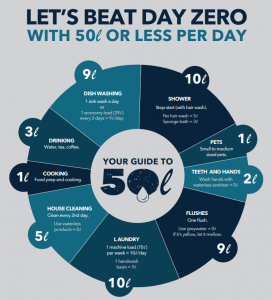 So what can we expect if somewhere in Britain runs out of drinkable water? We can look at what Cape Town is facing, and make our guesses from there. They have lakes drying, and businesses threatened, including wine production. If production can’t happen without water, then production has to move elsewhere or dry up completely. Furthermore, as a city moves closer to running out of water, the price of water will increase, which could inspire many to leave a city because of the water rates. This all takes an economic toll.

When ‘Day Zero’ arrives, there will be water banks around the city where water rations can be obtained. Stewart Perrie writes that each citizen will be allotted 25 liters a day of water. To put this in perspective, Perrie mentions the average household in the UK uses just under 150 liters a day. In an effort to postpone, the Cape Town Government website  issued a two-page restriction list of activities regarding water, including rules such as ‘The use of portable or any temporary play pools is prohibited’, ‘You are encouraged to flush toilets (e.g. manually using a bucket) with greywater, rainwater or other non-drinking water’, and many other rules regarding boreholes.

What Can You Do?

While London’s approximated Day Zero is 2025, there are a few things each individual can do to postpone the day until a solution comes.