An Unexpected Victory and the Desolation of Brasenose 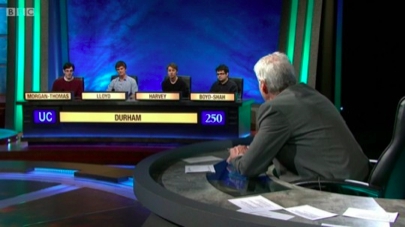 On Monday evening, delayed by participation in a particularly successful pub quiz, I sat down with my housemates to watch University Challenge featuring Durham University. Despite being a reasonably loyal viewer, this was the first time I had felt particularly strongly about who I would like to win – Durham, obviously. However, being a pessimist, I feared the worst for the brave brains from Durham, battling what sounded an impressive college from Oxford, boasting Michael Palin and David Cameron among their alumni. In my mind Durham seemed to be building up for a particularly embarrassing defeat, with Paxman reminding the audience that while the Oxford team represented just five-hundred and seventy students, the Durham team were representing around sixteen thousand. However, my negativity was soon washed away by sheer astonishment.

The Durham team introduced themselves well, sounding impressive but not big-headed. A good mix of subjects represented, I felt a little better about our prospects. Then questions began, points went up and up, and Brasenose sat there, evidently unable to prevent this thrashing. Durham accumulated ninety points before Brasenose even managed to get on the scoreboard. At a score line of two-hundred and forty to five Brasenose finally began to fight back, but left it much too late and were unable to make any difference to the massacre which occurred, with the show finishing on two-hundred and fifty points to Durham and just thirty-five to Brasenose, Oxford. This was almost an historic score, with the lowest legitimate score ever recorded under Jeremy Paxman standing at just thirty, also scored by an Oxford college.

Although the whole team needs to be strong to achieve such a victory, one member of the Durham team stood out as a particular champion: namely, Daniel Morgan-Thomas. Studying Classics and History, he should have had a solid base of knowledge in two subjects, but he answered an impressive seven starter questions correctly, covering a variety of topics including theology, politics, opera and Greek mythology. This breath-taking performance left our whole house in awe, and we can only hope for more of the same in the following rounds. As well as Morgan-Thomas, team captain Fred Harvey put on an impressive display, answering five starter questions correctly, while Lloyd and Boyd-Shah, the remaining two members of the team, both also contributed, with Lloyd answering one and Boyd-Shah answering two starter questions correctly.

Durham has won the competition twice: once in 2000 and once in 1977. It is one of just four universities to have won under both Jeremy Paxman and Bamber Gascoigne, and their overall ranking is joint fourth with six other teams, lying under Magdalen College Oxford, Manchester, and Trinity College Cambridge. With an impressive first round, prospects for this year are looking bright, with Morgan-Thomas looking set to follow in the footsteps of University Challenge legend Gail Trimble, who, representing an illegitimate Corpus Christi team, famously answered fifteen starter questions correctly in one show.

If Durham continue with such dominance then questions will surely be raised about why Oxford and Cambridge must split into their component colleges while Durham is allowed to pick the best from across the university. Paxman’s brief explanation at the beginning of the show that it is because teaching remains separate from college life that Durham competes as one entity gave the official reason, but a strong performance from Durham could lead to objections from Oxbridge, whose teams are obviously weakened by having a much smaller number of students to choose from. Manchester, holding joint top position in overall competition rankings, demonstrate the advantage of strength in numbers, choosing their team from a massive thirty-nine thousand students. However, change is unlikely to happen, as there is no way to separate universities such as Manchester, and combining Oxford or Cambridge colleges could make them unstoppable, with Oxford colleges combined holding an impressive fifteen wins, while the Cambridge colleges together can claim eight titles.

With just two matches left in Round One, Durham have achieved the best score line. However, other notable victories in Round One included UCL’s defeat of Exeter by ninety points, and Gonville and Caius, Cambridge beating St. Anne’s College, Oxford by two-hundred points. The fixtures for Round Two should be released in the next few weeks, and we will know which team have the misfortune of competing against the almighty Durham.