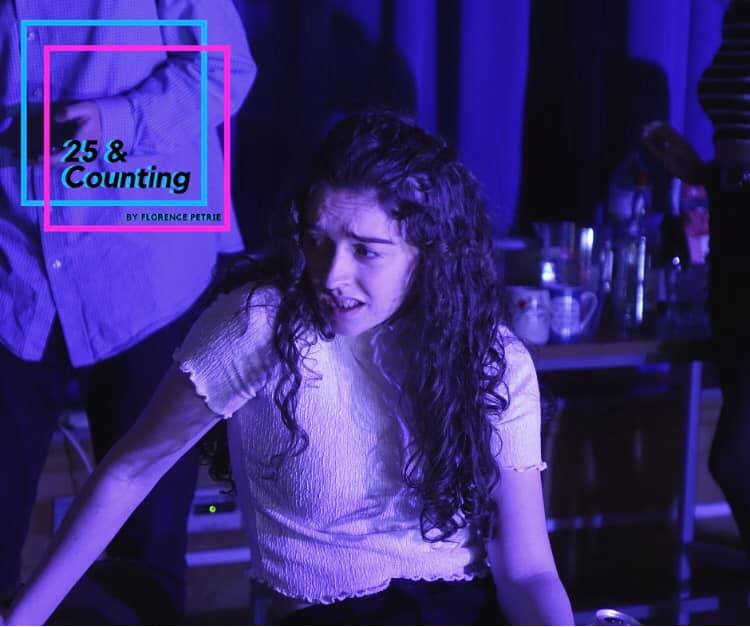 In the Director’s Note to this play, writer/director Florence Petrie claims that one of her main aims in writing and directing it was ‘to shed some light on the female voice’. In that case, Petrie deserves a medal for the sheer pulse and vividity with which the female voice is rendered here; the dialogue reminds me of the famous quote Austen made about Pride and Prejudice, calling its dialogue ‘light, and bright, and sparkling’. Not only is the script excellent, the acting, directing, lighting, staging, and all other aspects for the most part converge to create an excellent performance which really does it justice.

It revolves around a group of four friends, two of whom are in relationships, who, after a difficult drunken evening, have to cope with the cracks emerging between them while also balancing the pressures put on by the two romantic partners. This all happens in a play which keeps up this excellent sense of pace through fantastic acting. Each character is so nuanced and flawlessly-acted that I have no choice here but to compliment all of them. Fearn is a blunt, often brutally honest woman who seems to take on a leader-like role in the group, and is excellently performed by Esther Levin who manages her character’s internal conflict exceptionally, especially in the aftermath of a sexual assault (a scene handled with great tact and respect). Sarah Cameron’s Pia is a promiscuous cheater who is dating an older woman and is given an incredible amount of sass and humour by Cameron’s carefree mood. Lauren, by contrast, is shy and insecure, but is spurred into action by Pia’s relaxed nature, a moment which Catherine Wright manages with great skill, speaking with a cadence and likeability that really brings audience sympathies towards her. Finally, there is the seemingly put-together overachiever of the group, Olivia, who is played with great control by Emma Lauren Broadhurst, though this control gradually loosens as the character’s relationship with her boyfriend falls apart.

As friction between the four central characters grows, audience sympathies are constantly shifting, which is one of the major achievements in the play’s writing. Despite this, the only character who remains consistently unsympathetic is the only male character, James (played by Danny Parker). Another of writer-director Petrie’s stated aims was ‘to expose the abusive male, and how they can be so’, and in this she has immensely succeeded. From his very first appearance, James cements himself as an apathetic control freak who likes to bend any woman he can to his will. Parker does an exceptional job at playing this incredibly odious character and doesn’t attempt to direct any kind of sympathy towards him, which is encouraging. Only when we don’t waste sympathy on such toxic men can this plague of controlling behaviour be abated.

Despite the serious concerns the play touches on, it actually manages tone incredibly deftly (for the most part). One of the script’s greatest strengths is its ability to shift quickly between humour and drama, always managing the tone carefully such that the audience stays invested. A particularly great example of this is when a moment so serious that it threatens to lose the audience’s attention is then undercut by the sudden, comic return of Olivia from a date. The lighting furthermore helps to create this tone. Though neutral for the majority of the performance, it is instead flooded in blues and purples during the more impressionistic, ‘physical theatre’ interludes which intermittently interrupt the action of the play.

These physical theatre sections are honestly my biggest criticism of the play. Though the first two are quite useful and well-performed, (the first in setting up Fearn’s changing attitudes as she grows up, and the second providing a smooth transition into the party scene) the rest of these sections feel gratuitous and needless. They don’t appear to add much other than to reiterate the power relationships between the characters, which the writing is already good enough to set up on its own!

Overall, these sections do not tarnish such a captivating play. For perhaps the first time, I remember sitting in my seat and being genuinely quite upset that this play was over. I highly recommend this moving and original piece to anyone who has the time to see it; it stands as a real pinnacle of what can be achieved with student writing.