Gethsemane to Golgotha: A Spiritual Journey in Sound 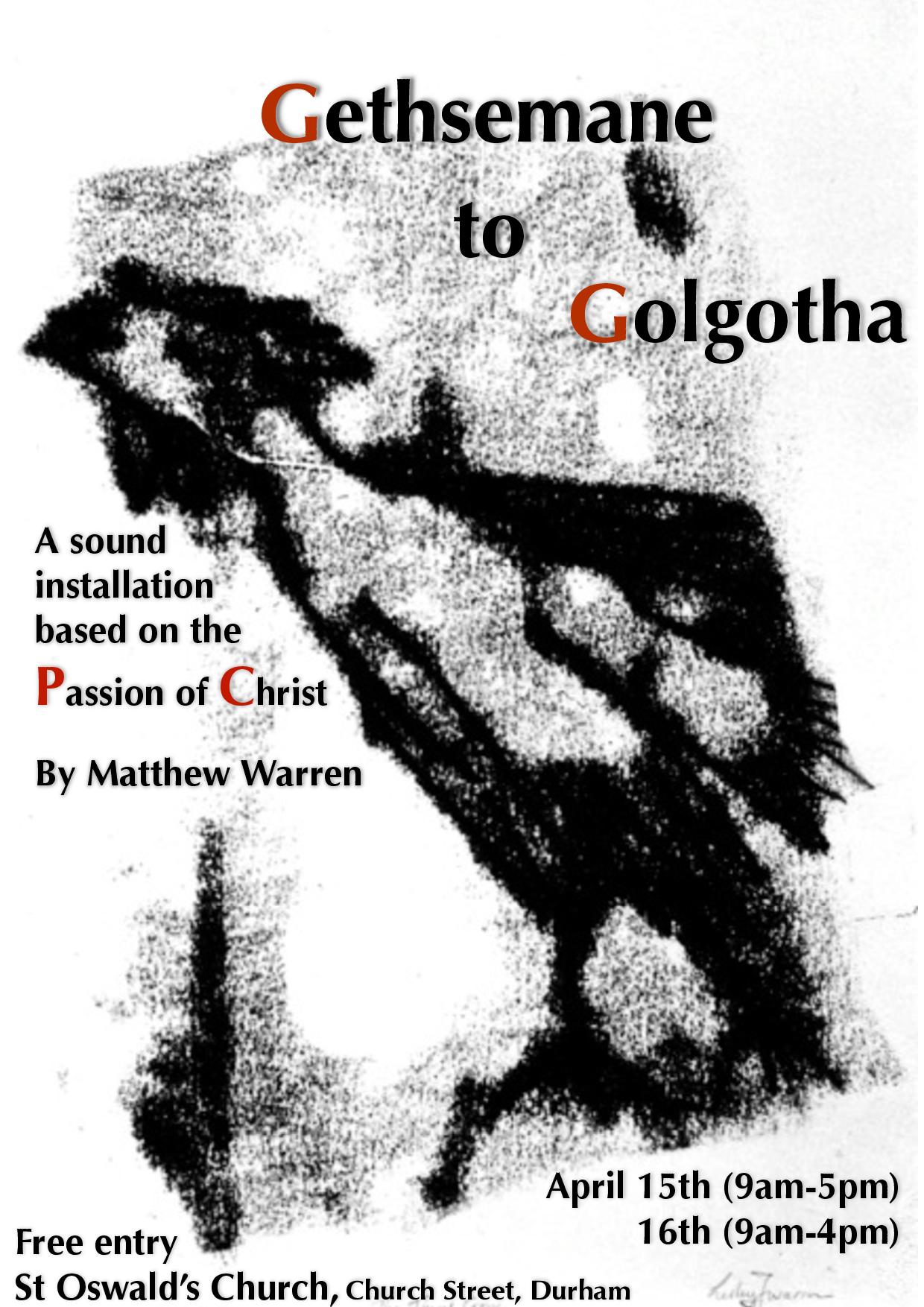 I’m sure for many students ‘Easter’ begins with the end of second term – collapsing into five weeks of slumbering bliss after the last-week summative rush. But from a purely religious (and perhaps a bit pedantic) perspective, Easter doesn’t really start until Easter Sunday, the day symbolising the resurrection of Jesus from the tomb.

For most of our so-called ‘Easter’ holiday we have in fact been in Lent – a time traditionally of fasting and penitent reflection, which is at its most intense during the week immediately before Easter: Holy Week. Within the narrative of Jesus’ life, Holy Week represents the transition from Jesus being hailed as a radical and pertinent religious leader to an outcast and a criminal. And the reflection on this usually takes a seemingly miserable and dark form, in contrast to the joyous and glad celebration of Easter (and indeed the unseasonably sunny weather of this April).

Matthew Warren’s sound installation Gethsemane to Golgotha is the perfect companion to Holy Week – it is a sonic exploration of the anguish and betrayal of the events leading up to and culminating in the crucifixion of Jesus. In Matthew’s own words ‘Whatever your stance on [the Passion’s] truth, it is an incredibly tragic story of martyrdom’. The installation is a very personal and emotional response to the narrative.

In many ways it’s a contemporary take on the traditional ‘Stations of the Cross’, where pilgrims tread a symbolic path representing Jesus’ journey to the cross. However, in Matthew’s installation the path is lain with the echoes of each betrayal, reverberating off the walls of St.Oswald’s church. Using a series of speakers strategically placed on a route through the church the piece leads the listener through the sequence of rejections, each told by the individual characters as their loyalty gradually morphs into apprehension and disownment and denial.

In the composer’s own words: ‘Recall each betrayal of Jesus by his followers as they turned their back on their teacher. The word rabbi is a symbol of their trust and commitment to Him. The texture thins along the path as each disciple’s betrayal unfolds until Christ is left, alone, on the cross with the sound of the wind and those cruel nails resounding in his mind. The piece finally moves into the tomb – a world in which the memories of the past sufferings agonisingly reverberate like dark spirits.’

Walking in through the door of the church you are first confronted with a wall of sound, almost overwhelming, which at first seems like a great wind or a distant earthquake. Moving towards the sound sources you hear voices, whispering the word ‘rabbi’, or teacher, and as you walk you hear the word gradually become more distant and harrowing, the voices becoming coarser and more threatening. As you move through the words distort, moulding into the background sound which at times seemed like wind, or creaking wood, or rushing water. The words become more intense as the individual voices become more obvious, ceasing to be a conversation and instead becoming a number of separate and sparse monologues, offset with the increasingly percussive sparks of noise.

As you near the end, the voices distort even further, reflecting the each specific betrayal: the voice of Judas becomes the sound of falling coins, Peter becomes a rooster crowing, the crowd’s whispers become the damning cry of ‘Barabbas’, freeing the murderer and condemning Jesus in his place. Finally you leave the ever-persistent rumbling to enter the porch of the church, a metaphorical tomb where subtle speakers create a resonance of the events before, including one final mournful whisper of ‘rabbi’. Every aspect of the artwork has been considered: from the stark rope indicating the path to be followed to the provocative cover artwork and the quotes of the disciples professing their contradictory loyalty to their ‘teacher’, deliberately placed along the pilgrimage’s route. However, there is no real way of doing the piece justice by merely describing it. In order to understand the work, it must be experienced personally.

A composer with an obvious social conscience, Matthew explained to me that with his installation he wishes to engage people in the narrative but allow them to come to their own conclusions based on the emotion his work conveys. Although the similarity to the Stations of the Cross idea is noticeable, he evidently wishes it to feel not like a succession of prescribed events with a specific response, but a free journey, at your own pace, allowing the listener to come to their own conclusions.

Although Matthew does have a religious perspective on the story, the success of his work lies in attempting to portray the Passion narrative purely in terms of its emotions, without leading the listener into a distinct interpretation of the events. It seems to me that by presenting the Passion as pure art he has, rather than watering down its religious message, actually succeeded in making it far more poignant and personal, and perhaps more importantly universally appreciable. Although a Christian story, he allows it to be seen as a human tragedy which can be recognised by people of all beliefs. He described it as an ‘earthly description of a subject often confined to chapel ceilings’, and quite consciously used sounds which originated in the real world. The only section of the artwork which could be considered truly unearthly is the tomb, with death being the entry into an abyss of the unknown.

However, I find myself leaving the church into quite a different abyss. I walk out of the cold and bleak atmosphere of Gethsemane to Golgotha into the blinding April sun. The birds twitter in the treetops, a poignant counterpoint to the simultaneously human and inhuman sounds of before. And I wonder:

Did the birds sing when they led Him to the cross?