Harry and Alfie of Hudson Taylor are irish brothers who dropped out of uni to move to London looking to get picked up by a major record label. Aged 21 and 20 respectively, they are now signed, have released a few E.P.’s and are about to release their first full album entitled “Singing with Strangers”. I went to see them at their first headline UK tour when they were at Riverside in Newcastle on Feb 3rd. The venue was intimate with no more than fifty people crammed into a small nightclub dance floor facing a four by four metre raised stage.

Supporting Hudson Taylor were two irish acts, the first of which was ‘Jack Morris’ who plays acoustic guitar and writes folky blues with humourous lyrics. Particularly enjoyable was a song he had written about walking around London stoned whilst visiting Alfie and a cover of Lou Reed’s classic “Walk on the Wild Side” which really got the crowd going. Following Jack was the brother-sister collaboration band ‘Southern’ who have a similar vibe to the Strypes. Their harmonies were beautiful and vibrant with “Shout It” raising the energy in the room and “Cool Kid” getting the audience singing along.

The excitement was almost tangible just before Hudson Taylor took to the stage. The lights went down and everyone screamed and clapped as the brothers picked up their guitars and checked their mics. Then they began to play “Just the Thought” encouraging everyone to clap along in the dark before the lights came on with “HT” in huge white LEDs and the atmosphere and staging set the mood for an incredible gig. 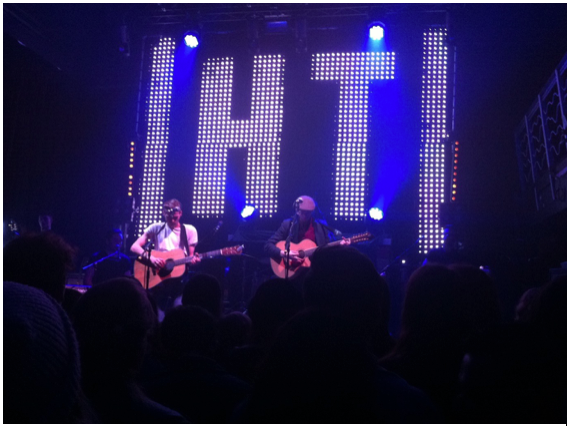 Harry and Alfie, of Hudson Taylor

In between playing, Harry and Alfie took it in turns to engage with the crowd. Alfie greeted us with a very irish version of “Whey aye man” which got a big laugh and later explained the story behind “Trouble Town” about the place he goes to mentally when he’s writing lyrics. Harry offered insight into their life in London living as a three with Alfie’s musical girlfriend Gabrielle Aplin (successful in her own right) before they sang “Beautiful Mistake” which was recorded in collaboration with her on the album. They managed to select just the right mix of new songs from their soon to be released album and older ones from their already released E.P.’s. They covered all the old favourites including “Care”, “Called On” and “Chasing Rubies” as well as newer songs which will be on Singing for Strangers such as “To Be Loved”, “Off the Hook” and “The Night Before the Morning After”.

Enthusiastic foot stamping and chanting for “One more tune!” led to a very short break between the main act and the encore which was received with shrieks of delight from the audience. They smashed it with “Battles” at the end and everyone left on an amazing high filled with the infectious irish energy bestowed upon them by some serious musical talent.