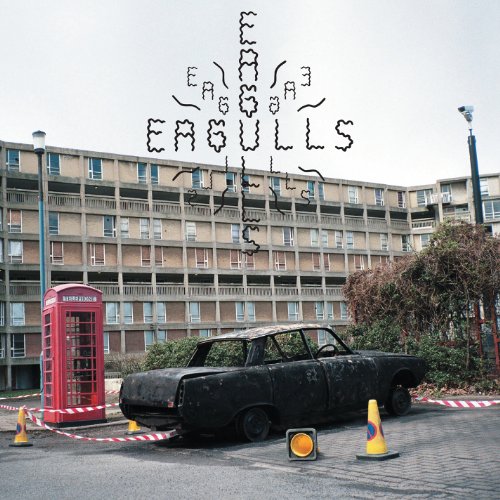 The cover art for the band’s debut album

Combining the punk fury of The Clash with the dark angst of Joy Division, there’s no denying the power of 5-piece post-punk band Eagulls. Critics have responded well to their disturbing lyrics, hacked off disposition and intuitive music videos (the video for single ‘Nerve Endings’ features time-lapse footage of a rotting pig brain). Having recently supported Franz Ferdinand on their nationwide tour, and travelled stateside to perform on ‘Late Show with David Letterman’, the band of twenty-somethings tonight find themselves headlining their own show in Newcastle’s The Cluny. I caught up with guitarists Liam Matthews and Mark Goldsworthy before their set.

Hi Guys, great to meet you, how did you all meet?

What’s up with the name? Who thought of it?

Mark: It doesn’t really mean anything. We didn’t have a name but we had enough songs to start gigging. We thought it would be funny to call ourselves Eagulls, but there’s no real meaning behind it.

Liam: It was a joke that we were going to call our band Eagulls, as obviously there’s already a band called The Eagles. We hadn’t decided, and we had a gig, so Tom wrote it down to give to the promoter and it stuck.

Have you been working on any new material?

Mark: Yeah we’re writing a new album at the minute. One of the new songs is in the set but it doesn’t have a name yet. Maybe we’ll have another new song in the set by the end of the month.

Do you have a writing method that you stick to?

Mark: No not really. Some people write the odd melody at home themselves, but everything gets worked on in our practice studio together, that’s how a song becomes fully formed.

So it’s a gradual process?

Liam: It does sometimes happen quicker. We might be stuck on one song for a month, and then suddenly have that moment where it all comes together, and then George (the lead singer) will go away and write the lyrics.

So George focusses entirely on the lyrics?

Liam: No we all write collectively. Sometimes having five people in a room all at once can be a bit too much, you can be sat there twiddling your thumbs, so we might go down in pairs or threes and just have a mess around and make some music.

As a band what would you say is more important, the musicality or the lyrical content?

Liam: I’m one of the musicians in the band, that’s what I’m for, but I still feel there’s an importance in the lyrical content. They’re what give the songs meaning. There’s a lot of music I listen to where they’ve got nice melodies and stuff going on and you listen to it so much, but I find the music that I always come back to is the music with the deeper lyrical content and stuff you connect with, that’s how you relate to it and how it stays in your mind. That’s how a song becomes timeless. A song is like a document in time for the artist who wrote it.

I read that you guys dressed up at Peter Sutcliffe (aka The Yorkshire Ripper) and his victims once?

Mark: It was Halloween.

<And thus the topic comes to an abrupt close.>

Who do you think the most important British acts are nowadays?

Mark: There are a lot of good bands in England at the minute. Hookworms are good, and around Leeds there are some really good hardcore bands. Perspex Flesh are really interesting, and Autobahn, who are playing with us tonight. Sheffield has a really good band too called Sievehead. They’re like garage punk, but quite original

Mark: Moody but not in a cheesy way.

Liam: None of the bands we’ve said are thrash metal…

Have you guys been keeping up with the massive rise of Royal Blood?

Liam: I think it’d be hard not to rise like them when you’ve got a major label, posters everywhere. People seem to like them, it’s not my cup of tea. Just having a major label behind them can push a band- a label can market a band to be number 1 by spending pounds.

Liam: I don’t think that’s true either, obviously for stuff that sells, a lot of people like it, you can’t say something is bad just because you’re not interested in it yourself. When you’ve got a platform that big to make yourselves heard on more people are gonna give it a try, but there are bands underground who are doing much more interesting things who have to work a lot harder to be heard. Chips for your tea don’t really taste of much but it goes down well and it fills you up. If you wanted you could be a bit more adventurous and try something you’ve never had before but most people just come out with chips. That’s my analogy.

Royal Blood, Drenge, Deap Vally, there’ve been a lot of rock duos coming out. Maybe it’s a bit of a backlash to electronic/overproduced music. Maybe people like the fact that it’s just two people. Would you say there’s a benefit in being a five-piece like you are?

Liam: The benefit of being in a two piece is you’re gonna get more money per head. I think as well, when you’ve got a two-piece, there’s a lot of electronics going into it to make it sound like it’s not a two-piece, and I think with a lot of the two-pieces now there’s no point in them being a two-piece ‘cause they’re not doing anything that third member playing a bass couldn’t do better. Jack White was a good musician and utilised being a two piece to the maximum, he made some interesting sounds, but with two-pieces nowadays a third bass player would sound better than just using an octave pedal on a guitar.

Mark: I think you’re just limiting yourself. You have that option to make your music more diverse if you have a bass-player, like you can make your own basslines that don’t necessarily just follow the guitar.

Liam: Some people like that big sound where it’s just guitar and it’s quite minimal. But I like stuff that’s got different layers. You can listen to it one time and hear something that you haven’t heard before. It’s more interesting.

In a recent interview, Disclosure said that guitar music has done all it can do, and that electronic music is the future. What’s your take on that?

Liam: Doesn’t mean people don’t want to listen to it.

Mark: That’s wrong too, because they might not be at the top of the charts, but there are a lot of really good bands that have guitars, and it’s still really interesting music, they’re just not flavour of the month at the minute. People go on about this a lot, they say electronic music’s just come up in the last 5 years, but it’s been around since the seventies and definitely in the eighties. It’s definitely not anything new. I think there are more limitations at the digital end, because when you’re working with real instruments and noise in a room, things can get unpredictable, especially in a live scenario- if you go and see a band and it’s an electronic band, generally it’s formulated every single night, everything’s on a click and there’s not that much room for improvisation. It’s quite a static thing.

Liam: The bands you’ve mentioned, they’re good at writing songs and arrangements and they put other big selling artists with them for collaborations, I think that’s the big thing that’s taken over at the minute, it’s not really the fact that it’s electronic music, it’s that it’s manufactured, someone’s singing a cheesy chorus over the top of it.

Mark: I like Disclosure though. I think our first gig they DJ-ed after in the back of the little pub, four and a half years ago. The first time we’d ever played London.

You mentioned in a blog post sometime ago your disapproval at bands ‘sucking each others’ dicks’. Was that just a heat of the moment thing?

Mark: It wasn’t meant to come across as spiteful as it did, even though there’s obviously some venom in there. It was meant to be just funny and sarcastic.

Mark: It was written not said, and people can’t read emotions in the words on the paper, they’ll assume it’s meant literally, but that’s their interpretation. I think people took that a lot more seriously than it was intended to be taken. The blog at the time, we had no followers, it was like thirty people, mostly the bands we played with and our friends and stuff. Within a week it was a thousand hits a day for a few days.

Liam: Just like when you read a book. I’ll read a book and take a completely different message from you reading it. It depends on your mentality and how you’re feeling in that moment. And if one person says what this means, people won’t even read into it, they’ll just take that view.

Mark: If someone’s written a few hundred words, you can take one sentence out, highlight it and put your own context around it, and you can get anyone to think what you want. That’s what happened with a lot of it.

One final question. What music experience did you have at school? Did you learn any classical instruments?

Mark: No it was all independent. There wasn’t really much time or money put into it, at my school anyway. Not for playing guitar anyway, maybe if you played flute or clarinet, they’d have you playing in the school band, but I had guitar lessons with a fellow who played in a local band when I was about nine or ten, then playing myself. Obviously once the internet started coming along, people get tablatures from the internet and once you become confident you start working things out for yourself and teaching yourself. Towards the end of school, when I was about fifteen, my music teacher found out I played guitar and he wanted us to get some guitar lessons, but I think it was just so they could enter us into competitions with the school band. They got this guy to come in and teach us, and it was so boring and unenjoyable and I already knew how to play guitar! I just went home and played what I wanted to play.

It was at this point that I started talking to them about makes of guitar and getting a bit self-indulgent. Eventually I released them and they slinked backstage to continue setting up…

Eagulls are currently touring the UK with support from Autobahn