Natasha Pulley in Literature on 1 October, 2010. 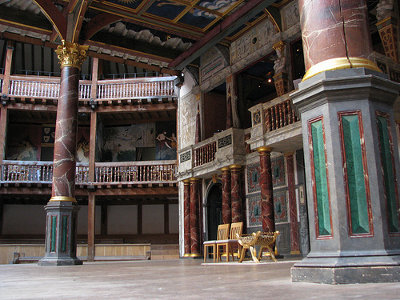 The Globe: An Elizabethan favourite?

Last month a supposedly shocking news story hit the headlines. The Daily Telegraph ran an article which revealed that Oxford University’s The Union society was rewarding its members with a 10% discount at a local sex shop.

It’s worthwhile noting that the sex shop was only one of 63 local businesses that had negotiated special deals with the prestigious Union but probably no surprise that the scheme had caused a bit of a storm, even as it enters its second year.

Perhaps the most striking feature of the article was its suggestion that some union members felt the move “undermined” its supposed “women’s initiative”. Whilst it’s difficult to comment having never visited the store in question, for me this flagged up some curious developments in the modern sex industry.

There’s now an Ann Summers on nearly every high street, and Durham is no exception. In 2004, Ann Summers already had 117 high street shops across the UK and they proudly reported that 70% of its customers were ABC1 (social grade roughly equating to the middle classes) women and the other 30% were men shopping with their partners. Ann Summers is, essentially, a multi-million pound industry with women very much leading the way. In contrast, any sex shop catering exclusively for men pretty much carries a reputation of being seedy or sordid. It is only female sexuality which has been embraced by society as something playful, something, dare we suggest, to be encouraged. In contrast, male sexual curiosity is usually derided as puerile, prurient or even perverted. In modern culture, male sexuality, it seems, isn’t that sexy.

Tune in to any prime time television show and you’re likely to find that many of the sex scenes on display cater a little towards the kink. Anyone remember Bree’s first husband Rex in Desperate Housewives trying to strike up a “safety word” with his wife as they experimented with sadomasochism? Even the traditional chocolate box villages in Midsomer Murders have been prey to some rather unusual sexual practices.

Yet at the same time, countless shows have toyed with sexual sadism as an apparent method of manslaughter – a prospect that all too recently made it to the headlines with the investigation into MI6 operative Gareth Williams’ death. Williams has since been tackily dubbed the “sex-game spy” by the Australian press, as speculation as to the cause of his death questioned whether he died during a “bizarre ‘autoerotic’ experiment” (as described in The Australian).

Whilst sex shops can’t be held entirely accountable for fuelling “extreme” sexual practices, there’s no doubt that they have capitalised on, and even help to engineer, making once more-controversial sexual practices considerably more mainstream.

A quick perusal of the Ann Summers website will show you exactly how carefully it treads the line – it offers nothing more than “light bondage” accessories, with none of the toys in its “hardcore” range catering towards sadomasochistic sensibilities.

What remains fascinating about the mainstreaming of the sex industry in Britain is how carefully society continues to tread this very same line. Women’s magazines regularly offer their readers hints and tips on how to indulge in traditionally more extreme sexual activities, yet Cosmopolitan dared to challenge its own predilections when it ran an article earlier this year asking whether S&M could damage the power balance in relationships.

The Oxford Union’s agreement with a local sex shop may hardly come as much of a surprise to a society where kink has made it mainstream but whilst our reservations remain, the industry seems permanently prey to a state of paralysis: it dares not to too openly indulge the taste of men and it remains rooted to defending just how “restrained” its products are.

It may be reaching the mainstream, but it seems we’re still treading rather murky waters after all.

The Ann Summers brand has been breaking new territory on the high street since its first store opened on Edgware Road, London, in 1972. In the face of much controversy and heated debate, this retailer of sexy lingerie, toys and accessories has grown from humble origins into a national chain proudly championing female sexuality, bringing fun – and better sex – to the masses and now, to Durham.

Chief Executive Jacqueline Gold has naturally had a lot of criticism to contend with over the years as she expanded her father’s small business into a multi-million pound empire. A number of conservative groups across the country have voiced opposition to the arrival of Ann Summers stores in their towns and villages; a notable example being the vicar in Tunbridge Wells, who condemned the brand as totally inappropriate and “degrading” to marriage in 2005.

It seems that he is not alone in his objections to the appearance of pink, fluffy handcuffs in local shopping centres. The chain was forced to close a shop in 2007 in Perth, Scotland, after parents complained about window displays and the embarrassment they caused when walking past with curious children.

And so, this brings me on to Durham. Our small, yet perfectly formed city, that has become notorious for its rubbish nightlife, manages to get by without other high street staples like Office and Paperchase, but somehow needs to have a sex shop. (Seriously, we don’t even have a McDonald’s, but we do have a local branch of Ann Summers!) And it’s a big, purple, sex shop that is somewhat incongruously situated in between Clinton Cards and Hawkins Bazaar. Right in the centre of the city.

But is this really a bad thing? To be perfectly honest, I’m not altogether sure. I completely disagree that the breaking down of sexual taboos in this country is always a bad thing. Consider, for example, just how hard Jacqueline Gold had to fight in order to get her male colleagues to take notice of the right of women to enjoy sex. Originally, Ann Summers was a brand that targeted an almost exclusively male demographic. When she pitched her ideas to an all-male board, Gold came into contact with an attitude that was not exactly hostile, but certainly dismissive of female sexuality.

In an interview with the BBC, she said “One board member actually said to me: ‘Well women aren’t even interested in sex so why would this idea work?’”

Should Gold not be congratulated for having single-handedly transformed a brand whose customers were ninety per cent male to one that has a demographic that is eighty per cent female?

It also seems as though the chain is predominantly a retailer of lingerie. Yes, this lingerie is a tad saucier that the more conventional fare to be found in the M&S opposite, but the more colourful items are displayed nearer the back of the store, not the shop windows.

In fact, Gold is reluctant to call Ann Summers a “sex shop” in the first place, arguing that there is a huge difference between her brand and the seedier end of the sex industry. I can confirm this; a walk along the streets of Berlin clearly demonstrates how much tamer Ann Summers is in comparison to some of the more subversive establishments on the Continent.

I therefore do not see the harm in having an Ann Summers in Durham. To be honest, I would personally be more concerned about the influence of brands such as Jack Wills, as the self-proclaimed “Outfitters to the Gentry” have, in my opinion, a much more harmful message that blatantly upholds elitism.

So: it may not be large enough to satisfy my shopping needs – I still have to travel up to Newcastle to browse French Connection and Office – but when it comes down to sex versus a tasty Big Mac, I think I may have to come to the conclusion that Durham has the right idea…