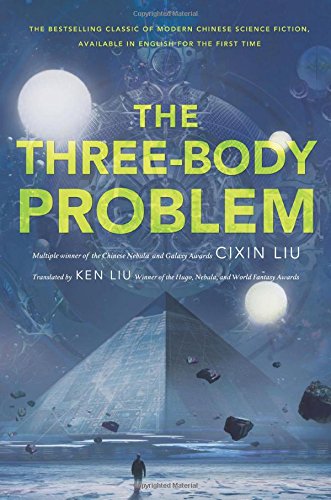 As a brief introduction, Cixin Liu’s The Three-Body Problem is the first book of a hugely popular and critically successful sci-fi trilogy, Remembrance of Earth’s Past, which has recently been translated from its original Chinese into English. It’s just about four hundred pages in hardback but seems to be much more due to its multiple narrative threads, interwoven timelines and several instances of fairly dense and complicated scientific content all of which requires the reader to pay close attention. In my opinion, Three Body is particularly outstanding due to its multiple levels of interest; the book will interest you if you enjoy learning about contemporary science, communist history, Chinese culture and the Cultural Revolution, speculation on extra-terrestrial life or just reading something that is completely different from anything else on the shelves!

The level of complexity of the novel makes it difficult to really describe concisely what it’s about. There are multiple protagonists, who come in and out of focus as the story goes on, fortunately there is a handy list of characters for reference at the front of the book. Although there are long periods when they are often out of the main gaze of the novel the two main characters are Wang Miao, a nanotechnologist involved in a very strange computer game, and Ye Wenjie, an astrophysicist with dark secrets. This manner of storytelling with new threads being constantly introduced can be baffling at times, but it is not in any way unsatisfying; it’s all a part of Liu’s artistry which keeps the reader guessing throughout.

Three-Body is built upon contemporary science; nearly all of the principal characters are scientists of one sort or another and the wider academic and scientific community of China acts as a backdrop. Perhaps then it is unsurprising to learn that Liu himself has experience in this community, having been trained as a computer engineer. Fortunately, Liu’s extensive knowledge does not make the science of the novel inaccessible; he makes the effort to present the general ideas clearly, in a way that is understandable even for those of us with limited scientific knowledge. For instance, the titular Three Body Problem is an analytically unsolvable scientific problem: how do three celestial bodies act when in gravitational relation to one another? Three Body concerns many such scientific topics, and is celebrated by critics for the accuracy of its science, a departure from many other sci-fi novels which tend to make up their own rules. This includes interstellar travel without excelling the speed of light, string theory, computer science and nanotechnology.

I’m trying to avoid giving spoilers as I really would encourage anyone to read this book, so I hope it’s not too much to say that in this particular sci-fi book, like in so many other examples of sci-fi, there are aliens. They communicate with Earth and have a strong interest in Earth. For me the most striking point is that these aliens are given their own voice and Liu does not present them as either inherently good or bad. The interaction between the Earth and the aliens is complex, with various factions of thought in both parties, which makes for a very interesting read as the reader wonders how he or she might react should they be experiencing the same events.

In terms of the historical and cultural landscape of the novel, this can be the most fascinating part for a Western reader. The novel takes us into the midst of the Cultural Revolution, its aftermath and to modern China, but in no linear way as the timelines jump around all over the place. As I said before, you’ve really got to concentrate. Liu’s depiction of Chinese history in Three-Body is intended for a predominately Chinese audience who would already be familiar with the general history so Liu jumps straight into the narrative rather than explaining the historical background in great detail. Often in historical fiction it seems that the author feels that their research must be expressed directly to the reader, to show their great understanding of this particular historical period. In Three-Body this is not the case which is a huge advantage in involving the reader in the story rather than the history. When necessary the translator Ken Liu (an award-winning sci-fi writer in his own right) adds informative footnotes which keep the Western reader informed on Chinese history and culture without impacting upon the fluidity of the text.

I hope I’ve given some idea of the kind of experience Three-Body is as a read. I’ve been reliably informed that the following two volumes of the trilogy just get bigger and better – we just have to hang on for a few months until the translations get published. Fortunately Three-Body provides plenty to ponder on during that wait.