Review: Far from the Madding Crowd 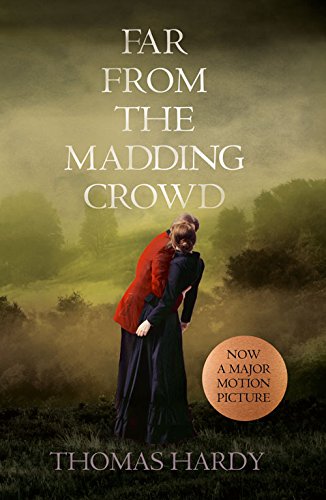 “From romance to rustic life”

I’ll be honest: starting this article was ever-so-slightly daunting. Thomas Hardy’s book Far from the Madding Crowd is not only one of his most well-known but also well-loved in the literary world, having recently been listed as one of The Guardian’s greatest love stories of all time amongst other honours. Chronicling the story of life in a rural community- most specifically that of Bathsheba Everdene and the men who court her over the course of the novel- Hardy’s work is fascinating in staying popular, spawning television adaptations, an opera and several films, the most recent of which comes out in May. But is it still relevant to today? Let’s take a look…

It has to be said that Bathsheba Everdene is one of my favourite book heroines. Not only is she the focal plot for the entire novel, but unlike many other female protagonists she is what drives it as well. Not many authors in the socially-repressed Victorian era would have allowed a woman to choose her own path, but Bathsheba not only flies in the face of convention by running her farm herself, but also by choosing her own suitor. The beauty of Hardy’s work is that it allows for believable characters- ones that you can sympathise with, feel frustrated with but ultimately root for. This is definitely true of Bathsheba; although arrogant and, frankly, slightly cold and proud at times, Bathsheba’s transformation from a naïve young woman into a world-weary adult is not only entirely believable but works as a redemptive character arc. This gives the book a slightly melancholy ending, as you’d expect, given that Troy is killed and Boldwood jailed for his murder in the last couple of chapters. Although romance does feature in the story, it is only one of several plot strands, including those of local life, Fanny Robin’s demise and Hardy’s explorations of class and gender. Given all this, Hardy’s work definitely has a realist flavour to it, and is incredibly easy to relate to as it explores the trials and tribulations of everyday human life.

Despite this, Gabriel Syme has to be the moral heart of the story. Though born a good few social rungs below Bathsheba, the woman he loves, Syme’s integrity is nevertheless what allows her to first employ, then trust, and finally marry him. Even though she haughtily rejects him at the start of the novel- something I know that I at least found really frustrating!- he continues to serve her faithfully. Though sometimes a little too pure of heart for my taste, when compared to the upper-class Boldwood and Troy- both of whom come to sticky ends due to their misguided love for Bathsheba- Gabriel’s rustic charm definitely has its appeal. Furthermore, this can easily be read as a social critique on Hardy’s part: his love for the ‘plain-spoken’ Wessex folk contrasting against the foppish, irresponsible upper classes is something woven into the novel. (It’s probably just as well, then, that Bathsheba ends up with Gabriel instead of Boldwood.)

Given that ‘Wessex’ makes up such an integral part of Hardy’s tales, what of the actual ‘Madding Crowd’? This is the social background against which the main story plays out, and it is important to the overall feel of this novel- it is, after all, named for the social world in which the characters live rather than the protagonists themselves. As a world it is fantastically detailed; from the detailed descriptions of the goings-on in the local pub (the inaptly-named Cain being one of my favourite characters here) to market day in Casterbridge, Hardy invests much time and love in describing the semi-real world of Wessex. Not only do the events of the local farmers impact on the main plot- such as the fire that ultimately leads to Gabriel’s employment- but it also vividly paints the picture of a long lost world which seems both very realistic and an idealised version of a fast-disappearing Victorian society. When compared to the fast-paced, complicated lives described in books such as John le Carré’s Tinker Tailor Soldier Spy, Hardy’s books make you want to travel back in time and live through them for yourself.

From romance to rustic life, Far from the Madding Crowd is something that has endured for more than a century in the public imagination, and for good reason. Hardy’s book is not just a love story (although a very good one nevertheless) but also a social diary of the times, which charts rural life at the end of the Victorian era and the attitudes held by members of society. By examining issues such as pride, marriage and gender, Far from the Madding Crowd works as a social critique, a revolutionary text, and many more things besides. Small wonder, then, that it has remained so popular.