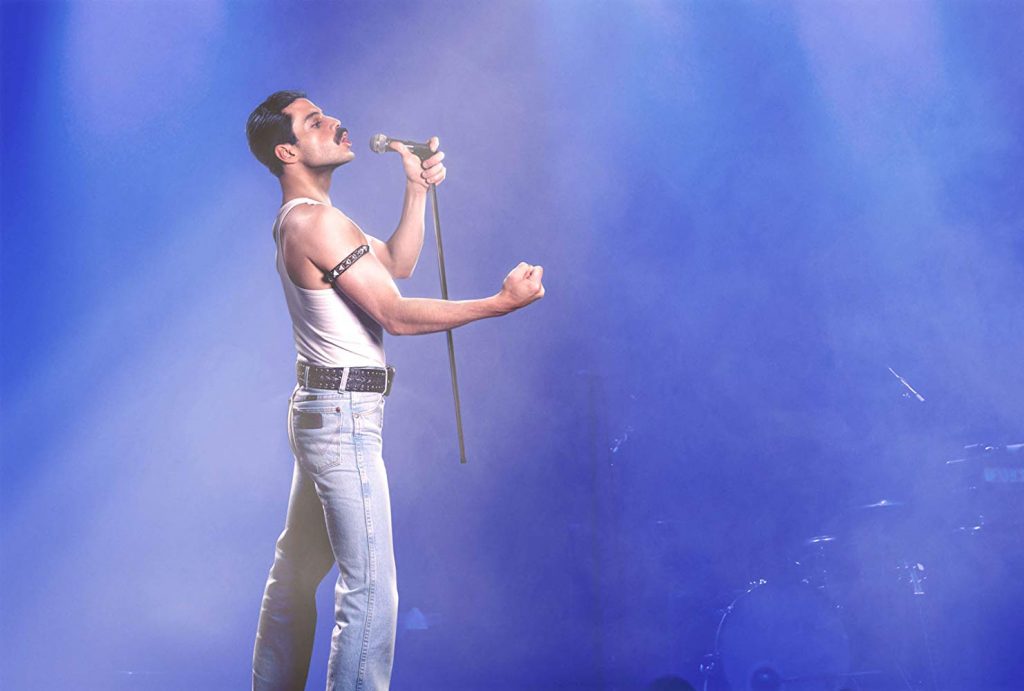 (This article contains minor spoilers for scenes that appear in Bohemian Rhapsody.)

Bohemian Rhapsody begins with Freddie Mercury in his iconic white vest and jeans combo, bounding through the backstage area of Live Aid. His back is to the camera and he walks alone, ignored by the crew members around him as he prepares for the show. He leaps out onto the stage and the screen goes to black. Towards the end of the film, we see this scene again, only this time Mercury is followed by his bandmates through the backstage area, and they face the 72,000 people filling Wembley stadium together.

The film’s struggle between focusing on Mercury and emphasising the role of his bandmates is a tricky one. Its official tagline being ‘The only thing more extraordinary than their music is his story’ encompasses this; it’s their music, but it’s his story that fascinates. Not their story. And this isn’t to say that a Freddie Mercury biopic shouldn’t show us the lives and influence of his bandmates, but watching the film can be an uneasy experience at certain points, especially when considering the involvement of Brian May and Roger Taylor.

The focus of the movie has long been debated. May and Taylor themselves have said they only got involved out of fear of someone else mistreating Mercury’s legacy. However, their involvement would have automatically put pressure on the filmmakers to appease them. Sacha Baron Cohen had been long attached to the project starring as Mercury, and his vision included a more brutal exploration of Mercury’s battle with AIDS and his sexual exploits. He left the project in 2013 due to creative differences, and in 2016 he revealed that one of his misunderstandings with the group had been whether the movie should continue past Mercury’s death in 1991. While the move ultimately does not do this, the fact that this was a subject to debate during Baron Cohen’s time on the film indicates a strong wish on May and Taylor’s part to emphasise their own roles in Queen’s legacy, even if it meant prolonging a Freddie Mercury biopic beyond his death. 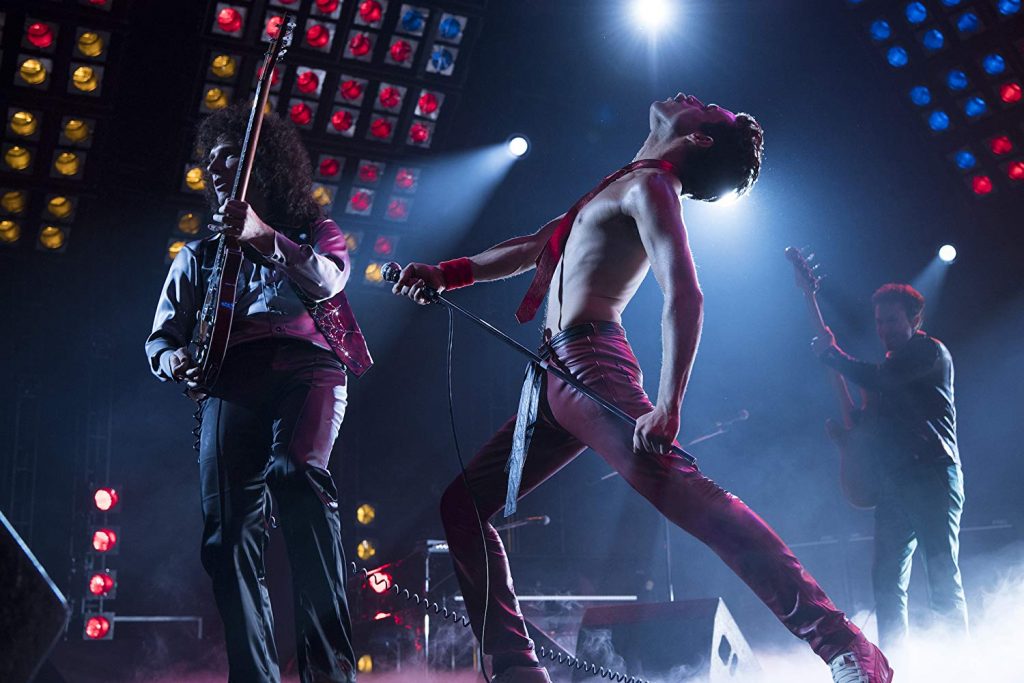 And the vision issues didn’t stop there. Director Bryan Singer was reported to have had heated disputes over the film with star Rami Malek, ultimately leading to his firing from the film. When asked about the disputes leading up to the film’s release in October 2018, Malek told IndieWire that he ‘just kept Freddie at the forefront of all of this. Nothing in this business surprises me anymore.’ Malek himself seems largely to thank for the focus not slipping away from Mercury even more, but whether the pressure of pleasing May and Taylor had already shifted that focus too much is up for debate.

To clarify, I was a big fan of Bohemian Rhapsody. It starts slow, but once Queen as a band get going, I enjoyed it thoroughly. I even enjoyed some of the scenes I’m about to mention, but they equally made me question whether they were written in just to ensure May and Taylor had enough scenes that screamed ‘he was nothing without us!’ – as opposed to creating an interesting, raw biopic about Mercury as a person – for them to be on the film’s side once promotion and release time came about.

While the film is not the adult-oriented exploration of Mercury’s private life that people like Sacha Baron Cohen would have wanted, it doesn’t completely leave out his struggles. There are two scenes in the film in which Mercury stumbles into rehearsal late, and the band bite back against his conduct. In one of them, Mercury comes in halfway through Brian May – played by Gwilym Lee – teaching Roger Taylor, retired Queen bassist John Deacon, and the album’s production crew the audience participation to We Will Rock You. May emphasises over and over that he wants the audience to be a part of their shows, and when Mercury shows up late, he immediately tells him to join the others on stage and clap along.

I like this scene. Mercury joyously plays along to his bandmate’s suggestion and stands amongst the others, clapping on an equal level. But this scene is certainly heavy-handed in both emphasising that May was the one to have this great idea, and that Mercury almost missed it due to his antics. It may be true that May wrote We Will Rock You, but it’s certainly dramatised in an attempt to essentially say that, at this point in the band’s history, Mercury was far from the one keeping them together.

In another scene I don’t like as much, Mercury argues with May and Taylor after having showed up late again. John Deacon sits in the background with his bass guitar and begins to play the iconic riff of Another One Bites the Dust. The rest of the band ceases their argument to listen and admire the riff, to which Deacon replies by – and I’m paraphrasing only a little – telling them to shut up and listen to him if they want to learn the full song. I get what they were going for with this scene, but again it’s highly dramatised to shine a positive light on the rest of the band versus Mercury.

Another part of a scene I really took issue with takes place just before the band perform at Live Aid. As one of their conditions for performing together again, Taylor demands that all of their future songs be credited to Queen as a whole rather than fighting over getting individual writing credits. It’s an interesting piece of information, but Queen actually released another album made up of entirely new material – 1986’s A Kind of Magic – in which band members received individual credits. Their new philosophy on song writing didn’t come about until 1989 with the release of The Miracle. Perhaps this discussion actually did take place in 1985 and they just decided to not enact it for four years, but to me this short discussion signals a hurried attempt at emphasising to the audience that each member was as worthy as the others and, considering the film doesn’t proceed past 1985, they had to insert this inaccurately into the timeline in order to get it across. Considering the already troubled almost 10-year production of Bohemian Rhapsody, it was clearly important to the filmmakers to have the surviving members of Queen on their side. And because of this fact, it’s unlikely that we’ll ever see a Freddie Mercury biopic that truly delves into his personal life outside of what is surface level knowledge and the fact that his bandmates didn’t like that he showed up late. His sexuality and recklessness is often reduced to a short scene of him merely walking through a gay club or attempting to call his ex-fiance, and criticism has recently been pointed at the lack of emphasis on Mercury’s heritage’s influence on his life and music, as the movie’s start when Mercury is a young man leaves out his childhood in Zanzibar as well as his adult relationship with his Parsi parents. Although I enjoyed the film, I can’t help but feel I could’ve seen a much deeper, more interesting version had something been done differently down its long, troubled production timeline.