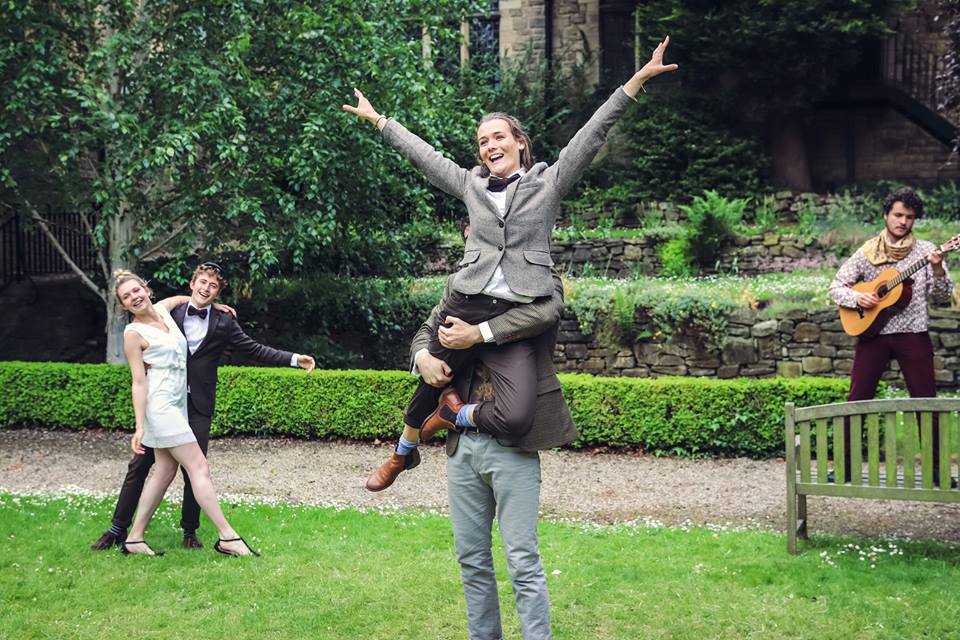 Arriving at Fellows Garden fifteen minutes before the performance, I was reminded what a nice location it is. For outdoor theatre, it is a wonderful space; naturally containing wings and a backstage, framed by trees and boxed garden, it gives a lovely (and expensive) feel to every outdoor performance staged there. The turnout was surprisingly poor, in comparison with last year’s CTC production of A Midsummer Night’s Dream. Perhaps it was the grey day, perhaps the lack of hardcore publicity, but it was a shame. The quality of the performance that was to come deserved a much larger audience.

As soon as the music broke out, the audience was swept into the atmosphere of a true Shakespearean comedy. Costume was vibrant, the comedy was perfectly timed and I really enjoyed the intertwining of music with each scene – the way it was not just used for songs, but also as support really enlivened the performance and gave it a slick, professional quality. Theoretically, sock puppets seem a poor choice, but portraying the opening scene in such a way actually acted to kick start the humour, which surprised and impressed me. Throughout, the tight-knit, well cast ensemble continued to impress and the two hour production flew by.

Jazzy Price was a fantastic choice as a gender-bending Marvolia. Quick-witted, with a fantastic grasp of physical humour, she was a treat. Similar was Sir Andrew Aguecheek (Dan Hodgkinson). From facial expressions to comic falls, he pulled it out of the bag every single time and had the audience giggling just from a simple wink. Sir Toby Belch (Danny Booth) should be commended also for setting up each giggle that Sir Andrew provided – as well as much of his own. He threw himself into the character and together they carried much of the humour that made the play so enjoyable. Maria (Emily McLean) also delivered wicked facial expressions and a pouty no-nonsense attitude that complimented the slapstick brilliantly. Feste (Barney Mercer) provided much of the transition from scene to scene and is merited with consistently strong vocal proficiency; he also had a fantastic little stint as Sir Topaz/himself that had the audience cracked up.

Sometimes when outdoors sound can carry and on this slightly windy day, I would say this was perhaps the only (but quite significant) downfall; sometimes lines, even parts of entire monologues, were lost. Particularly with regard to Viola (Emma Howell), whose softly spoken manner often meant the audience lost what she said. It’s frustrating, as I do agree with her interpretation of the character and it would work indoors, but outside it just didn’t stand, though this is something perhaps that should have been noted (and perhaps redirected) earlier on. It is not unsalvageable, but with regard to the very nature of the performance, it is something worth bearing in mind with a bigger audience. Projection is absolutely paramount; with Twelfth Night being one of my favourite of Shakespeare’s plays, I could work out what was going on, when at times I failed to hear, but the troupe should bear in mind that especially when touring and performing in the outdoors, many theatre goers won’t know the play inside out and it’s all well and good putting on a cracking show – but if the audience fail to hear it, much is lost.

Yet, (like in Shakespeare) the good vastly prevailed. Projection is a tweakable thing and overall it was a truly enchanting performance. So! For a Shakespearean comedy that will really have you laughing from side to side (yes! I know, despite the language!) and, coupled with the ability to bring a picnic should make seeing this show a requirement to round off your year at Durham.

Or see CTC Facebook Page for tour details around the country following the end of the academic year!