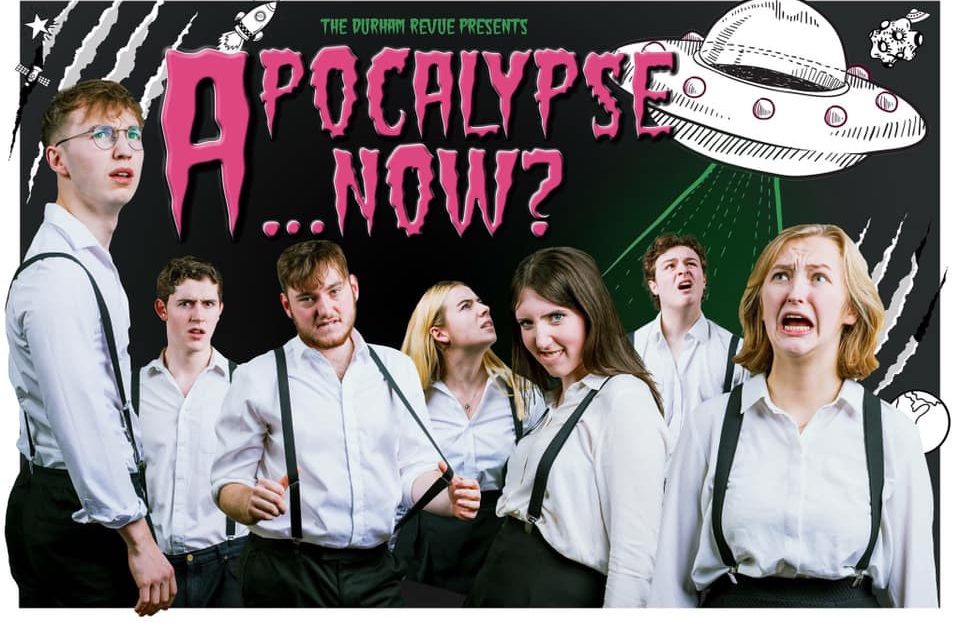 The apocalypse was originally planned for 2012 but clashed with the Olympics and so has been rescheduled to now. 2019.

Established 45 years ago, the Durham Revue have a lot to live up to, with a history of producing comedians including the likes of Jeremy Vine, Alexander Macqueen and Arthur Bostrom. Expectations high, we enter the bunker, an hour before the apocalypse is predicted to take place and with only sketch comedy to entertain us.

A few sketches in and the show is off to an unassuming start. The troupe use reliable tropes to guarantee some laughs, and most of them are successful. It does sometimes appear as if the sketches rail off without a successful punchline, despite the humour pervading throughout. The sketches based off of stereotypes are less amusing, mainly because of the clichéd nature and predictability of mimicking teenage girls and middle-class yoga-mums alike. A stronger sketch could certainly have been written in both instances, which makes better use of the female comedians.

Nevertheless, the enjoyability of the sketches improves as the show progresses, not relying solely on safe concepts. Particularly enjoyable sketches include the use of audience interaction to re-enact the First Crusade, reminiscence over ‘gone but not forgotten’ sketches and the lessons in comedy, varying from the structure of the other sketches. The audience participation sketch especially demonstrates the troupe’s ability to bounce off of the audience and their own natural wit. The varying lengths of the sketches also broke up the performance, with one-lined jokes illustrating that in some cases within comedy, it is quality over quantity.

Other favourites include the spy sketch and the West Side Story parody, both of which introduce other mediums, including music and choreography. Later on, others that stand out include the merman sketch, with ad-lib lines appearing to cause the most laughter, and the Harry Potter sketch; a strong, fresh take despite how popular Harry Potter is as a subject of comedy.

The transitions between sketches are less fluid, they could perhaps take some more thought, although the themed music does work well and allows for some distraction as the troupe moves into each scene.

Whilst some of the comedians certainly play to their strengths, with Hamish Lloyd Barnes’ delivery and Bob Howat’s voice – which is made for performance – coming to mind, it does feel as if some troupe members are left in the shadows. Lily Britton, for example, is certainly funny, but it doesn’t feel as if she is used to her full advantage. Nevertheless, if the complete team had been embraced and offered equal stage time, this would only strengthen the quality of the troupe.

The range in subject matter, period and comedic technique allows for a variety of jokes to be made about unpredictable topic matters throughout the show, which is definitely one of the group’s major talents. They focus on surprising details of plays, historical events and children’s books, before manipulating them into original scenarios. Yes, some of the jokes are safe, but the troupe offer unique and innovative material in the sketches where they move away from overworked themes.

The Durham Revue presents ‘Apocalypse… Now?’ is on at 8pm, Friday 25th January at the Mark Hillery Arts Centre.