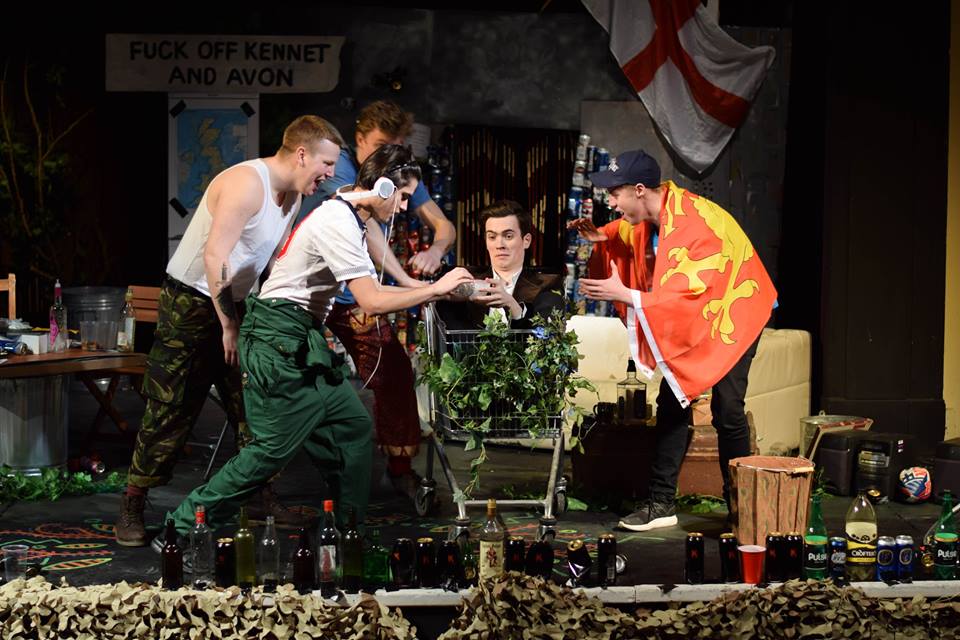 Jerusalem is a multi-faceted tragi-comedy dealing with the troubles of compulsive liar and drug dealer Johnny “Rooster” Byron, who leads a life of recklessness and rebellion in the woods with the help of his motley crew of rebel teens. With the constant danger of demolition by Kennet and Avon council ever looming, Byron takes a stand against the society for better or for worse Credit has to be given to director Kimran Rana for such a subtle interrogation of life on the fringes of society

Initially I couldn’t help but feel a little worried as I took my seat before the show began. Considering I had seen the original in 2011 and had the narrative sucked dry by my English teacher only a year ago, part of me was worried that the bawdy comedy and heart-wrenching tragedy would be lost on me.

I needn’t have worried at all. The vibrant energy the cast bring to the stage is infectious and kept the audience carefully balanced between a tense silence and raucous laughter as the tragedy and humorous plot unfolded. A rough and ready George Tarling played Johnny Byron with a stubborn conviction that had a sustained energy from start to finish and his charisma was the driving force behind much of the comedy. This was contrasted with moments of aggression, vulnerability and desperation, realised in the concluding acts as well as a desire much darker, which was seen in his interaction with a rather sensual and bold performance of Phaedra Cox (played by Mary Lord). A very interesting and bold decision by Rana. Alongside, Harry Twinning played a naïve and excitable Lee and Adam Evans played a sardonic, nonchalant and cynical Davey. They often acted true to their character as a double act of dark comic relief yet exhibited a feeling of stoicism, hiding a desire for something more. The unforgettable weedy and awkward presentation of Johnny’s ‘best friend’ Ginger by Kishore Thiagarajan-Walker reminded me of a parent trying to be down with the kids.

It is a testament to the whole cast to have sustained a three-act long tragedy and kept the audience engaged and guessing from start to finish. Although sometimes I felt the pace was little too quick in the first two acts, not allowing the events and words to sink into the audience members mind, their hard work has left me stunned and considering the play even as I walked home. This is a play for the student by the students. It captures the wild and outlandish nature of rave culture while the underlying political messages hang in the air, especially the easily concealed issue of child safety and stranger danger.

Letterbox production’s Jerusalem drags us willingly into a wild and fun world of drinking and drug abuse, then throws us better its bitter-sweet paradise and the harsh reality of modern society at its lowest tier.