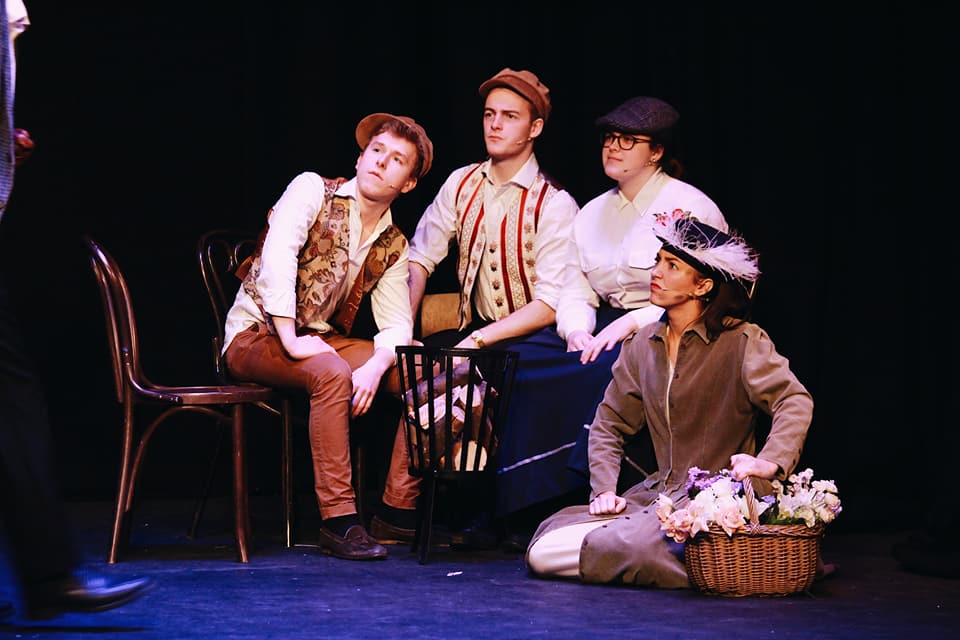 ‘My Fair Lady’ is a lively musical that explores ideas about social class and the importance of language. Set in Edwardian London the play follows the story of Eliza Doolittle who wants to change her thick cockney accent so that she can work in a flower shop.  Professor Higgins agrees to help her as he has made a bet that he can, in six months, teach her to speak so well that anyone would believe her to be a lady. The play is full of witty lyrics and extended dance numbers which Feather Theatre Company really brought to life on stage.

The opening overture really set the familiar scene of the classic musical in a way that was reminiscent of the Edwardian setting without losing the modern influences. The curtains opened to a frozen scene which then came to life into a bustling street. The striking and well thought out costumes drew the attention away from the somewhat minimalistic set, and distinguished the upper from the lower classes, instantly introducing the main theme of the play. The set was also beautifully painted with towering bookshelves, but I was a little confused as to why the fly was kept so low down as it blocked the top of the set. Furthermore, occasionally certain set pieces seemed a bit purposeless, for instance, at one point the stage was completely empty except for one plant. Indeed though, the contrast between the set of the cosy and decorated office and the other rather empty scenes could be jarring. However, the production team certainly succeeded in creating an understandable and believable ‘world’ for the characters to inhabit, through their use of costume particularly, which was a stand-out feature of the show.

The show was incredibly slick and well-rehearsed, and it was smooth despite some mild technical mishaps. Indeed, all of the actors executed the solo music numbers with a polished feel, Eliza Doolittle, played by Olivia Nicole Kittle, was especially impressive particularly as she had to maintain a cockney accent through large parts of the play. Kittle’s performance was certainly one that fulfilled the character of Eliza, in particular her solo number “Just You Wait”, in which her excellent projection did the number justice. Lewis Russell, Freddy, was another stand-out performance of the night and pulled off the humour of his character in a way that was both hilarious and slightly touching. Overall though, the energy of the play was lost slightly in slower scenes when less characters were on stage, which led to some pacing issues. However, this was revitalised whenever the chorus came back: their lively dance numbers were another highlight of the play, if a little long.

The songs which were well-executed and well-performed. The pit orchestra and the actors remained well in sync throughout the performance and though there were some levelling issues these were relatively minor. Generally, the sound quality was pretty good especially within the band who should be congratulated for their excellent performance. Feather Theatre Company’s ‘My Fair Lady’ gave a well-executed show which was funny, touching and all-around enjoyable.

‘My Fair Lady’ is on at 7.30pm, Friday 2nd- Saturday 3rd March, at the Assembly Rooms Theatre.