Review: Death as a Salesman 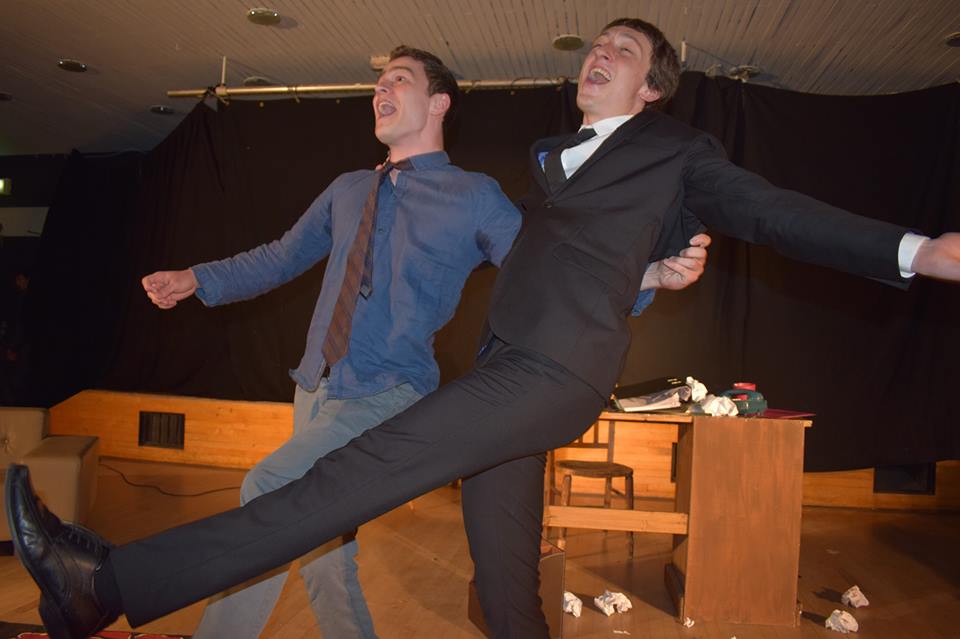 Death as a Salesman is funny, relevant and overall a brilliant exploration of issues surrounding the meaning of life and death.

The protagonist of the show is Tony – a suicidal marketer with marital issues. The show begins with Tony attempting suicide which fails as he does not know how to tie a noose. Stan the Grim Reaper suggests a partnership between the two – enlisting the help of Tony to create a marketing campaign to advertise death. The play then continues with Tony contemplating the point of life and suicide, all the while attempting to repair his marriage to his wife, Helen. Along the way, we are introduced to Tony’s secretary Iris, who shows a genuine concern of Tony’s well-being, and Nick, the stereotypical self-absorbed boss who only has eyes for himself.

The show is amazing – with well-timed jabs at current affairs adding good humour, and the minimal set and cast allows the audience to focus more on the storyline. Most importantly, the actors all looked their part and played their roles convincingly. Calum Maclean gave a realistic portrayal of Tony’s anxiety and hopelessness – he is obviously suffering and is searching for a way out. He thinks death is a solution yet subconsciously tries to search for a reason to stay alive. Tony represents the typical workaholic too caught up in the rat race, only to look back and realised that he has achieved nothing of any real worth, and wonders what is the point of it all. In facing the emptiness of life and its chronic unhappiness, Tony wonders if death is the only form of escape.

Alex Berridge-Dunn manages to bring out the softer side of Nick despite his cocky and conceited persona. Nick represents a person in denial- he works excessively to distract himself from darker issues, but deep down he craves meaning and purpose just like any other. His over-emphasis on various external achievements hints of overcompensation, possibly to make up for his inner insecurities. In a surprising turn of events, the real Grim Reaper takes on the role of fairy godfather, trying to revert the damages caused by Stan and provide a happy ending. He attempts to paint a rosy picture of life and meaning, though this is ultimately a task the characters have to take on themselves. The significance of Iris is a bit harder to grasp – she plays the concerned colleague, but does not seem to have any individual influence on the plot.

The only downside, if any, about this play is that it is too short – being only an hour long. The existential questions raised in the play would stand to be discussed further, and characters could be developed more with a longer plot. It will be interesting to see how each of them can grow as a person – will Nick eventually humble down, or will Tony finally find a purpose?

Overall, Death as a Salesman is an excellent play – the actors are convincing, the questions are worth pondering and the writing is impeccable. It’s a shame the show only goes on for two nights; more people definitely need to watch this!

Death as a Salesman is on at 7pm, Wednesday 13th June in the Vane Tempest (Student Union).