Review: All Shook Up 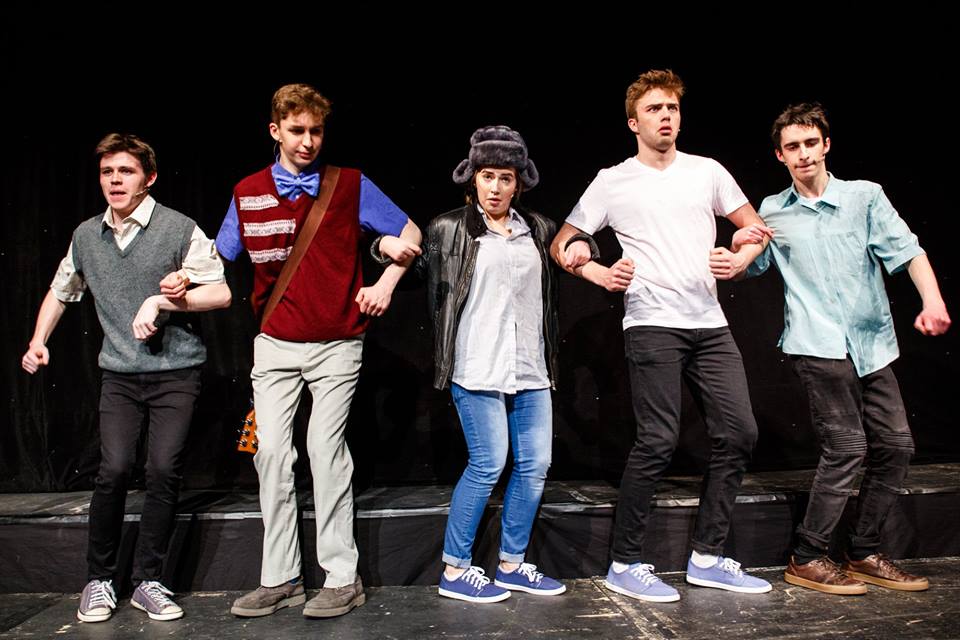 All Shook Up is a light-hearted, cheerful, and optimistic musical. Sitting somewhere between a love story and a comedy of errors, the complex and sprawling plot is interspersed with classic Elvis songs. It’s quite hard to describe, mixing the best elements of the movie ‘Footloose’, ‘Grease’, and ‘Twelfth Night’ into a very silly but thoroughly enjoyable musical.

I will admit to not knowing a great deal about what makes a band ‘good’, but the musical accompaniment was appropriate and of a very high quality. The guitar solos and musical interludes were hugely beneficial to the piece. The singing was generally very good and soulful, and if not always perfectly tuneful, enthusiastic and energetic. Although at times the dances were not fully synchronised or perfectly on beat, it was not obvious, and the energy of the scene was not damaged by it. The other dances, particularly ‘Hound Dog/Teddy bear’, were excellently executed, and made extremely effective use of what was quite simple choreography.

The piece evoked the feeling of a small town in the American South West in the mid-1960s almost effortlessly. The costumes were incredibly vivid and specific, and went a long way to evoking the atmosphere. But even the technical elements, such as the somewhat cheesy follow spots and the assortment of colourful LEDs during dance sequences, made the piece feel dated in the best way. Beyond this, technical elements were used sparingly, but they were not missed by the performance.

Most members of the cast embraced their characters idiosyncrasies and bizarre quirks wholeheartedly. Though their accents occasionally slipped from the Southern drawl they established at the beginning of the piece, their physicality and other vocal quirks were extremely consistent. When it came to the comedy, everyone had excellent timing and inflection, and every joke landed well. Particular kudos go to Isla Brendon (Natalie), Harry Stanbury (Dennis), and Josh Russell (Chad). They found the delicate balance between the clownish, cartoony elements of their characters, but married them perfectly with their more sympathetic and human aspects. The audience found themselves rooting for all of them, despite their obvious flaws.

Catriona Gilmour played the onerous Mayor Matilda with a refreshingly insidious tone, who appeared to be more of an overbearing mother than the exaggeratedly malicious character she could have become. Martin Shore’s portrayal of a bumbling but endearing father and Tamzin Kerslake’s performance as a sarcastic and callous mother had a particularly good dynamic, and should be commended for the work they put into their chemistry.

I enjoyed it to a great extent. In my eyes, there is not an element of it that didn’t work, a song that was miss-sung, a dance that was miss-stepped, a line that was out of place, or a character that didn’t fit. I would encourage anyone looking for some kind of release from the stress of summative season to take a few hours out of their day and watch this silly, funny, oddly heart-warming, and enjoyable musical.

All Shook Up is on at 7.30pm Saturday 10th March- Sunday 11th March at Collingwood College.