With three plays, the Mark Hillery Programme of the Durham Drama Festival offered a great night of entertainment and displayed an incredible amount of talent.

‘You Will Hear Me’ by Yolan Noszkay

The night kicked off with the poignant and compelling ‘You Will Hear Me’, written by Yolan Noszkay who also directed alongside Emily Browning. A flurry of song, dance and powerful acting, the play follows the journey of two unnamed sisters as they navigate their way through the chaos of the Hungarian Revolution in 1956, ending in their eventual separation as they flee the rising violence. As stated in the programme, Noszkay based their play off the life of their grandmother, making this performance even more robust in its exploration of the experience of becoming a refugee.

Millie Adams as Sister 1 and Lara Eastough as Sister 2 were a phenomenal duo with their acting showing a real sisterly connection. The transition between playful teasing at the start of the show to the intense emotions after the sisters’ separation not only shows the fantastic range of the actresses but also does credit to Noszkay’s powerful writing skills. Adams and Eastough also showed incredible talent through dancing and singing, making the story of the refugee thoroughly accessible by exploring it in more than one medium. 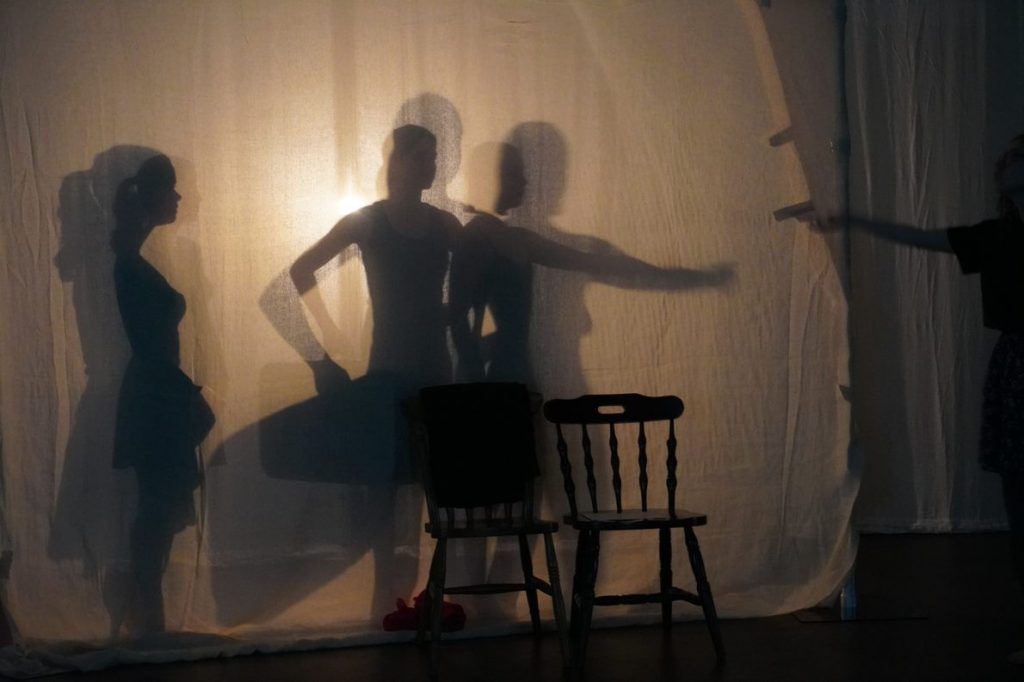 ‘You Will Hear Me’ by Yolan Noszkay. With permission of the DDF.

Adams and Eastaugh’s performance was beautifully complimented by Freya Stewart, Bella Illingworth, Daisy Mitchell and Sylvie Norman-Taylor who made up the ensemble. Stunning choreography combined with excellent shadow work blended perfectly with Adams and Eastaugh’s performance; using both dance and drama to allow the cast to move across the stage as one body. One moment in particular was the revolution scene, where the ensemble and the two sisters joined together in order to portray the uprising of Hungarian students through the medium of dance. The flowing movements and dramatic choreography conveyed a sense of beauty, even within the violence, highlighting the contradictions of the euphoria of standing up for your rights while being met with forceful resistance.

Despite the painful separation of the two sisters after the eldest one unexpectedly leaves in order to start a new life, the performance ended with a note of hope as the two characters embraced centrestage, surrounded by members of the ensemble. The energy created by this scene was tangible amongst the audience which only goes to show the immense power of Adams’ and Eastaugh’s acting combined with the literary and directing prowess of Noszkay and Browning respectively. This moment was pivotal in emphasising the talent of all those involved as the final scene reiterated the unbreakable connection and therefore triumph of family love even in the face of chaos and violence.

‘Beautiful Nothing’ by Em Oliver

The second performance of the night, the one-woman show ‘Beautiful Nothing’ written by Em Oliver and directed by Charlie Barnett, was an absolute showstopper. The plot centres around the troubled life and career of seventeen year old Corinne, an actress forced to date her co-star, Derek, in a shady publication deal with her production team.

Bhav Amar’s electric performance as Corinne was captivating as she expertly conveyed the complexities of girlhood in the face of a society that simultaneously idolises and slutshames the actions of teenage girls. Amar’s ability to jump from high-spirited, sarcastic commentary to powerful moments of vulnerability kept the audience enthralled right from the beginning. She had viewers in stitches as she retold the story of her first ‘dick pic’ but was also able to convey an impressive sense of tragedy as she suddenly revealed the suicide of the co-star halfway through the play.

This sense of dark and light ran through the entire performance, complimenting Oliver’s ability to write a plot with a refreshingly honest approach to girlhood- raw and earthy with a complete lack of unrealistic romanticisation. Oliver’s literary talent really shone through at points- such as the poem made out of death threats received by Corinne. This darkly humorous moment showcased Oliver’s amazing ability to write in multiple formats while also drawing attention to violence against girls on the internet. 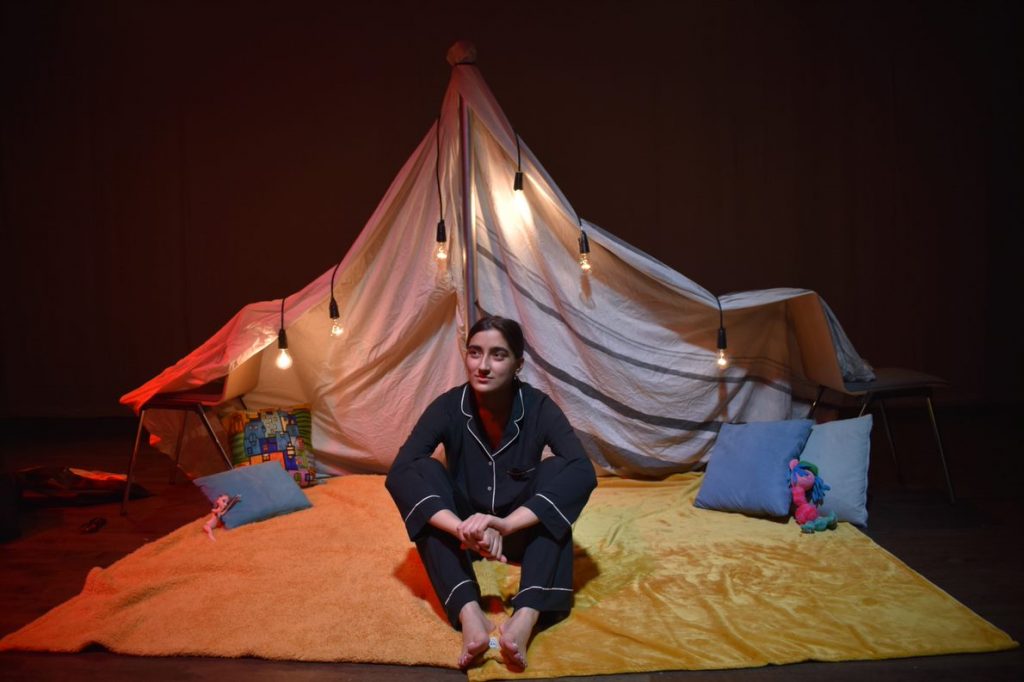 The staging of the performance was another brilliant aspect, the pillowfort in the middle of the stage acted as a constant reminder of Corinne’s age which made the dark subject matter even more hard-hitting. The constant ringing of Corinne’s phone throughout the performance was also a brilliant way to really drive home the point that privacy is a privilege that can’t be given to teenage girls in the public eye. Additionally, Amar’s ability to constantly move around and interact with the set kept the audience fully engaged with the storytelling process throughout the performance.

Finally, Amar’s direct interaction with the audience was a key part of her performance, she effectively put a stop to passive observation making the audience sit up and take notice of misogyny and sexism. Overall the show was a captivating exploration of gender, sex and childhood in light of a society that makes young girls grow up too quickly.

Funny, outrageous and farcical, the final performance of the night was Yibu Jin’s interpretation of ‘The Marriage Proposal’ by Chekhov. The play follows the calamitous actions of mother and daughter duo Sarina and Natalia (Louise Coggrave and Ayana de-Zoysa) as family friend Peter (Yibu Jin) asks for Natalia’s hand in marriage, causing a spree of absurd yet hysterical arguments between the trio.

For a one act play, the level of chaos triggered by the cast’s performance was fantastic and absolutely hilarious. Coggrave’s explosive performance as Sarina was exceptional, her stage presence was impossible to ignore as her comically angry outbursts balanced with Natalia’s outrageous mood swings and Peter’s high strung nerves. The dynamic created by Jin and de-Zoysa between their characters was perfect for the tetchy, agitated Peter and the overemotional, weepy Natalia. Furthermore, each actor managed to capture the characterisation of their parts in brilliant line delivery. de-Zoysa’s over-the-top emotions were absolutely hilarious, even more so in her interactions with Jin, who’s rapid-fire delivery and confusing wordplay perfectly aligned with the farce genre- Chekhov would be proud! 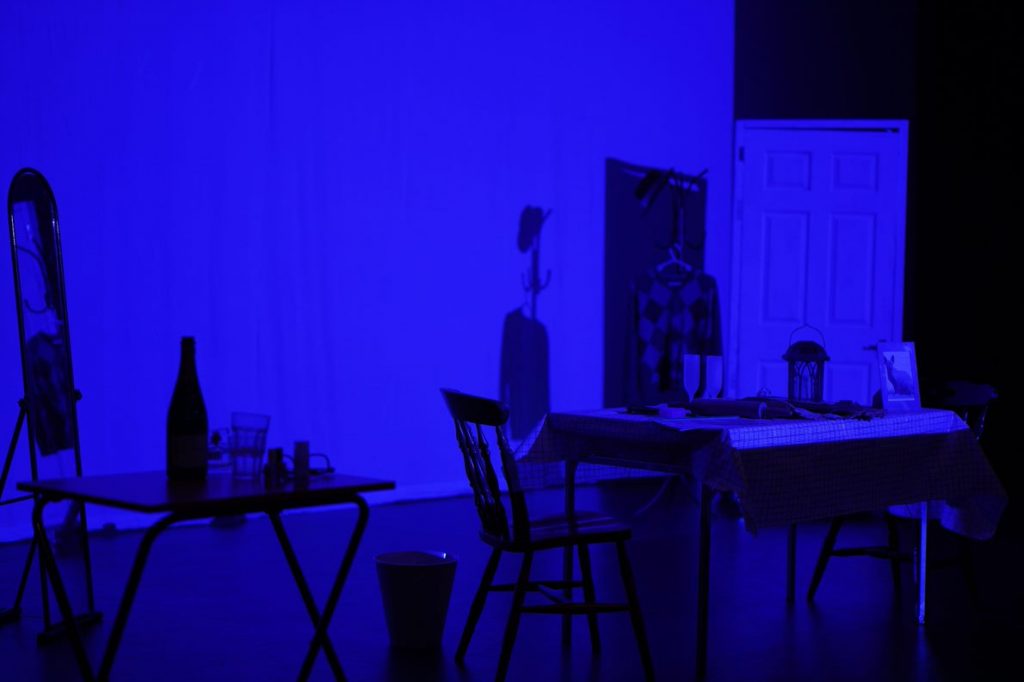 ‘The Marriage proposal’ by Yibu Jin. With permission of the Durham Drama Festival

The lighting team also brilliantly complimented the actors mirroring the stage lights to the rising emotions of each argument between the three characters; starting with plain white lights and gradually shifting, ending up in a chaotic kaleidoscope of colours which perfectly matched the pandemonium unfolding on stage. Additionally, the staging was a great way to support Jin’s unique interpretation of the drama. The decision to set the play in early 2000s Shanghai, whilst not completely obvious from the dialogue, could be seen in the choice of furniture and ornaments scattered around the stage making this a truly one-of-a-kind performance.

The final scene of the play where Natalia and Sarina think that Peter has died due to the stress of an argument over who has the best cat was a moment of peak comedy and an example of Jin’s directing talent. de-Zoysa’s nonchalant delivery of the line ‘He’s dead’ coupled with the delayed reaction of Coggrave generated a good laugh from the audience which turned into absolute hilarity upon Jin’s dramatic rendition of Peter suddenly reawakening and terrifying the other two.