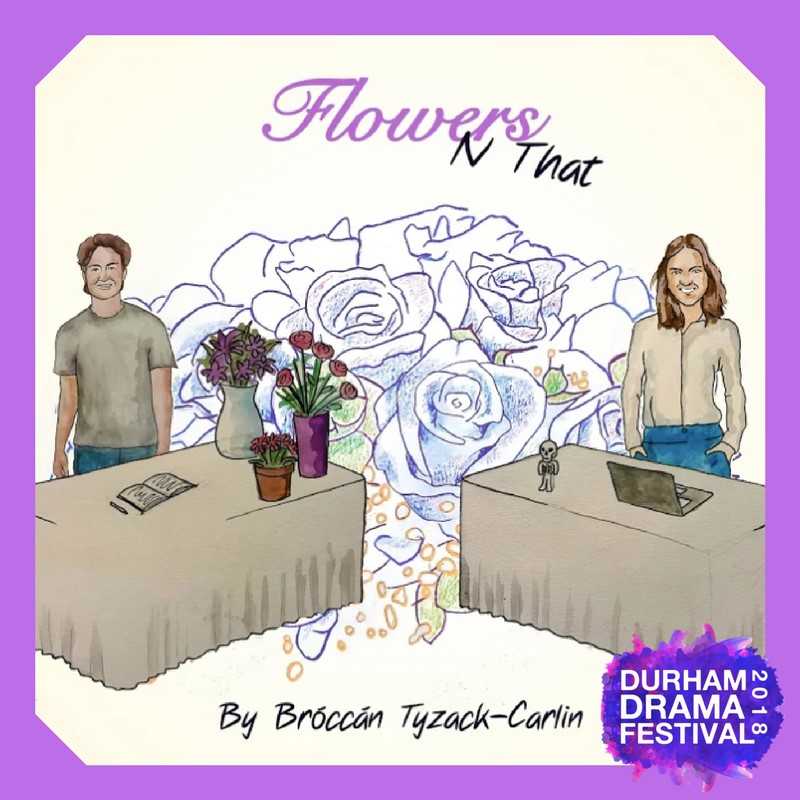 “…had no idea I would end up writing something that was actually very personal to me.”

Flowers N That is about a medium and a florist. The play follows their relationship as they prepare their stalls each year for Tate Hall’s Annual Wedding Fayre. They talk about their relationships, their ambition, and the creative drought that Disney Pixar seemed to suffer circa 2006. So you know, all the important things.

‘Flowers’ is fundamentally comprised of three different conversations. From the outset, I knew that the only way to show the entirety of their flowing relationship, whilst also allowing the characters room to breathe and show us who they are, was to offer snapshots into their world. And ‘The Arçend Suite’ of Tate Hall is very much their world. They are the only ones (bar an ethereal Public Announcer who may or may not also be a postman) who inhabit it. It is a place where they are vulnerable and a place where they both eventually allow themselves to be vulnerable. I wanted to create an environment where two entirely different people could be exposed to one another, an experience which they may initially seem terrified by, but would eventually come to embrace. This is all incredibly vague, but I think that the play will work best if knowledge of the plot itself is kept to a minimum.

There is no dramatic irony in the play and I would love the character’s journeys to be experienced by the audience with no preconceptions. In reality this play is quite light-hearted. It is a tragicomedy, with definite light and shade, but the one rule I gave myself was to be honest in what I was writing and only write things I can imagine people actually saying. I think actual conversations are often a lot stranger than people realise and I wanted to capture that. But then again, I often used conversations I personally have had as the benchmark for “what people would actually say”, so it may not be entirely representative of the masses.

When I started writing ‘Flowers’ last April, all I had in my head was the image of a slightly angst-ridden, millennial florist sat behind a desk. At one point he was a member of the ‘Teeside Floral Enthusiasts Collective’ but I soon realised that was a play no one wanted to see. It was only when Jane began to take shape in my head that I knew I had a play I wanted to write. Their relationship and their discussions allowed me to confront and express some things that I had never really been able to express with clarity beforehand. I had intended to write a comedy when I began this process and had no idea I would end up writing something that was actually very personal to me. It is still rather daft sometimes, but I hope people will take away more than that from the play.

I’m extremely fortunate to have such a fantastic cast and crew and cannot wait to see what they do with what is admittedly quite a mad old play. Or maybe this is all just a lie and Flowers N That is simply a means of reminding people that ‘Spirit in the Sky’ by Gareth Gates (featuring The Kumars) hit number one in the charts in 2003. A simpler time.