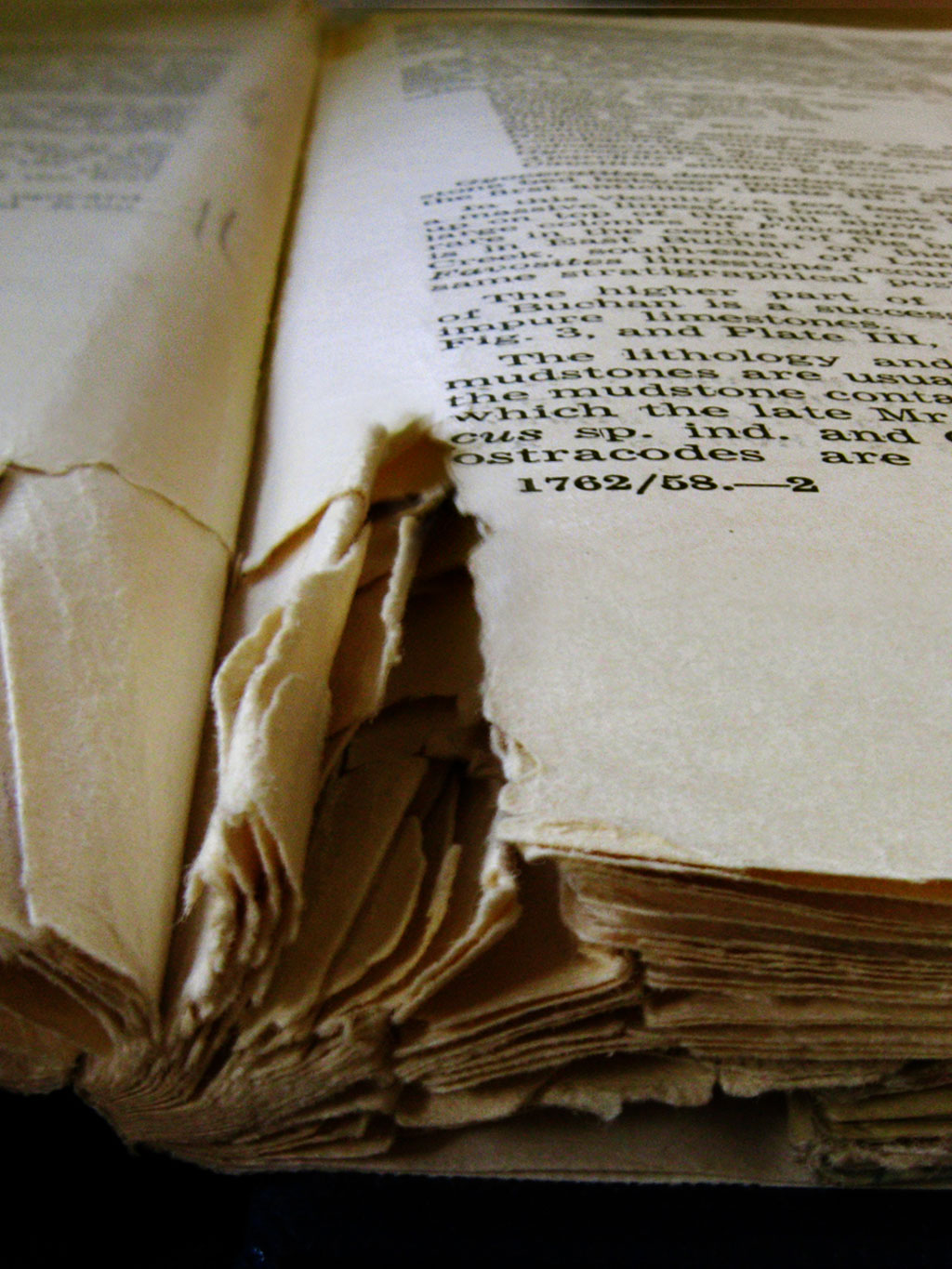 I knew a man who ate books.

He died because the pages became squashed together and formed this great solid mass structure which quite literally bunged him up. Those poor and helpless words were pulped beyond recognition in the corners of his bowels, and for a while, the man was a walking encyclopaedia. He told me that he ate them because he wanted to know everything. He imagined how each letter of every book would perforate the walls of his stomach and seep into his blood stream so they would fully become a part of him. Besides, he said, it was a much quicker exercise than reading.

Mr James told me himself that he was a clever man and I believed him. I noticed in his milky eyes, a defiant and bold declaration that perhaps this all made sense after all. Even after his death, I was caught in the cloakrooms at school sucking on the edge of a Gideon’s bible. Once, when I was ten, I chewed through the entire introduction to David Copperfield until my brother found me in the back garden, my guilty mouth full of prose. Everybody on my street thought Mr James was crazy, but to me he was like a pillar of smoke in the desert. He was just directing me to greater things.

On an afternoon he would sit out on his front lawn, sunken in a weather-beaten pink deckchair and I saw him most days at 3.30 as I walked home from St Albans. Each day he would sit, hunched, in his brown corduroy jacket, wearing a serious expression. His solemnness however, was not the sinister kind. When I looked at him, he would nod his head as if he was communicating in some sort of secret code. It was a reassuring nod, as if we were friends or soon to be friends. His house was a reflection of him. Like his jacket, it was brown and worn. Like his face, it was solemn but not sinister. Its front door was inviting.

He never consumed literature in public. I only found out his habits when one day, later than usual, I shuffled up the road in my ordinary manner, until my ordinary manner was disturbed by the distraction of several papers, lying like leaves, on the autumnal pavement. I bent down to look at them. The writing was small and the pages were yellow. I couldn’t read the grainy print but I imagined that in my hands I was holding papers of great significance. This thought process was shattered as I heard the disgruntled sigh of an opening door and the clatter of footsteps.

I looked up and saw a solemn face.

“I do hope that’s page seventeen you have in your hands dear boy, otherwise it will be nigh impossible to get my head around Confucius this evening.”

He took the paper out of my hands.

“You need the whole picture you see, or else it just won’t make sense.”

Then in a casual manner, the man placed a finger on his lips and winked as our first secret was shared. He proceeded to scrunch the page up into a ball and poke it into the corner of his mouth. He picked up the rest of the papers that had been scattered by the wind and then turned to walk back up his garden path, chomping.

Even in my childish brain, those actions didn’t make much sense. At school, I had seen some of the other children eat some nasty things. The previous year, Barry Bottomley was dared to eat a handful of soil. It was the hungry half hour before lunchtime so he crammed the gravelly pieces into his cavernous gob. He was sick all over Mandy Treeburn’s new sandals, but to his delight it meant that he was allowed to sit out of P.E. Still, a grown adult consuming paper was something completely new to me. In that moment, whilst watching a strange and wrinkled paper-eater departing from my current position, I realised I could do nothing but follow him.

He had a taste for philosophy so sometimes he ate Marx for breakfast. After our first encounter, I began to visit the worn, brown house on a morning before school where I became formally acquainted with his eating habits. My mum thought I was being extra diligent in my recorder lessons, but instead of walking into the school gates, I waited and waved until she had driven around the corner, then ran back down the road to Mr James’ warm front door. He greeted me sincerely each day and would ceremoniously shake my clammy, childish hand as I passed into the woody hallway. His hand was rough and ink-stained like parchment but its grip was comforting and warm. The inside of his house was musty; the smell irradiated from decaying monuments of books which adorned every wall and hallway of the building. The tombs acted as a labyrinth library, veiling a book-keeping Minotaur within.

I can remember the day I ate my first scientific paper. It was on nuclear physics and I imagined it tasted like the sun. As Mr James watched me gulp down the last of the bibliography, I saw that his milky eyes were arched and sparkling.

“How do you feel, Frankie?” he asked.

My mouth was as dry as crushed glass and my oesophagus felt stretched out of shape. Yet despite my physical unease I felt something well up inside me. A warm fog spread throughout my whole body until it reached the ends of my fingers.

“Knowledge,” he said, and his eyes smiled again.

He helped me to kindle a love for old books. They tasted smoky and wise in comparison to the shiny, new-born paperbacks that left a sour taste in my mouth. Over the course of a week and a half, I discovered that Dickens was to my taste. Bleak House, I remember in particular, had a distinctly earthy and dewy aftertaste which seemed to last a life time. I was getting into trouble at home because my mum would find my untouched lunch in my school bag. She scorned me for going hungry and I didn’t know how to explain to her that I felt full to the brim.

The atmosphere at school changed too. My practices, it seemed, were not going unnoticed. After Mrs Childers and several other school librarians witnessed me intently devouring a Penguin edition of Our Mutual Friend, the staff’s behaviour appeared to alter towards me. As I entered the doors of St Albans the morning after the Dickens’ debacle, it was as if a hundred eyes were focused upon me; they had a suffocating, unavoidable stare which gave me wild, untameable butterflies. I resumed my normal seat by the window in the classroom. A hush settled over my classmates like snow and I felt their eyes hot on my face. Word had spread. I looked down at the desk and realised that my work sheets had been laminated. The girl sitting across the table from me gave me smug look as if to say ‘chew on that’.

Later in the day my teacher Miss Chisman, who always had a cold, tapped me sympathetically on the arm and whispered that Mr Mitchell would like to see me.

“Don’t worry; you’re not in any trouble,” she sniffed, “he just wants to have a little chat.”

Mr Mitchell was the headmaster and he smelt strongly of coffee and old smoke. I couldn’t imagine what a little chat with Mr Mitchell would be like but I pushed my seat back and walked out of the classroom feeling my steps being scrutinised by the all-seeing eyes. As I walked down the corridor to the headmaster’s office, the passage felt like it was getting smaller and smaller, or I was growing bigger and bigger, but I knocked on his door and normal perspective resumed.

I sat down and didn’t say anything. I felt the wave of coffee and stale smoke start to stroke my skin and clothes. Then I looked around the office. There weren’t any books.

“This is Janet,” said Mr Mitchell, motioning towards a little woman on his right, “and she would like to talk to you to see how you are doing.”

Janet was the school counsellor and she often did assemblies at school about feelings. Janet smiled at me but it did not reach her eyes. They looked puffy and tired. After a pause, Mr Mitchell loudly clasped his hands together.

Mr Mitchell left. The door slammed. Janet flinched. Her puffy eyes then focused on me and she smiled her half-smile again.

I merely shrugged. She wanted me to talk about my feelings and I wasn’t sure how I felt about that.

“Now, I have been told by your teachers that you really love story books. Is that right?” she continued encouragingly.

I did not answer and endeavoured not to look in her eyes.

“What is it you like best about story books, Frankie?”

I clutched onto my silence.

She chuckled lightly; trying to engage me in some false camaraderie. She then tentatively persevered in her hushed, gentle tones.

“Frankie, Mrs Childers has told me that yesterday she saw you eating a book in the reading room. Why do you think you did that? Do you think you can you tell me?”

I finally met her stare and saw the hundred eyes reflected in her dark pupils. I spoke then, but found that the voice that came out did not sound like my own; it rose up from deep within my belly.

“I only ask to be free. The butterflies are free.”

She held my gaze and I watched a smile gradually reach her eyes. The eyes inside her eyes disappeared.

Early one morning I ran from St Albans to the brown house like normal. I knocked on the door and waited. Mr James was normally very punctual, but this morning he wasn’t punctual. After waiting three minutes, I grew wary and let myself in the warm door. I was met by the familiar musty smell but that day it was tinged with something foreign and intrusive. I found him seated in the middle of the maze with his head resting on the kitchen table and he was muttering. I edged closer and but could not make out any words. I gently shook his shoulder and he grudgingly peeled back his eyelids.

“I have made a very grave mistake, dear boy.”

His moved his frail hand towards some papers which lay just beyond his reach.

“I seem to have mistakenly bitten into something of great importance which is not sitting right with me.”

I reached out to the half-eaten sheaf. Only the top quarter of the page was still intact. I read.

“What does this mean, Mr James?” I asked.

I didn’t receive a response. His head was resting on the table once more and this time his milky eyes were now stagnant and unblinking.

My mum later told me that whilst consuming The Communist Manifesto with great haste, Mr James had accidentally eaten his Last Will and Testament that he had previously hidden within. His extended family were displeased. However, it turned out that in the last few minutes of his life Mr James had made a new one. In the top corner of a copy of Great Expectations which lay open on the kitchen table, there was a scribble signed in the old man’s scrawl:

“The books are for Frankie. Only he knows how to use them.”