Huma Bhabha at the BALTIC

Pakistani-American sculptor Huma Bhabha recently opened her first major exhibition in Europe in Newcastle’s renowned BALTIC Centre for Contemporary Art. This ambitious review spans two decades of the artist’s work, showcasing the sculpture which she is notorious for, but situating these within the photography, prints and paper work that are equally as haunting. And even though the atmospheric quality of her work is best understood when you and her figures are nose to nose, I was shocked by how clearly I got a sense of her climate anxiety, her influences and her artistic process just from the digital exhibition and resources on the BALTIC website.

Bhabha moved from Karachi, Pakistan in 1981 to study printmaking at Rhode Island, before taking an MFA at Columbia. Having lived through 9/11 and stayed in New York ever since, Bhabha has tracked the xenophobia and othering that flourished after national disaster, and aims to ‘make strange’ the human form in uncomfortable but also sometimes humorous ways. Bhabha is known for her figures often constructed from found objects, and the choice to use not just found objects but waste objects, like Styrofoam or car tyres, forces the viewer to confront the ugly side of consumer culture. Her fear for the future of our relationship with the natural world is a powerful undertone to this review, and is a central concern for her throughout her career. Bhabha’s broad reach of references allow for her work to be uncannily familiar yet distinct, drawing inspiration from modernists from the likes of Picasso, Giacometti and later Rauschenberg, as well as classical and African sculptural techniques.

Bhabha also sites science fiction as one of the inspirations for her work, stating that “The monstrous, and other forms of the monstrous and the grotesque, inspire me”[1]. Perhaps it is this grotesque or other-worldly quality that makes her work so enigmatic, with her choice to leave her sculptures either loosely constructed or seeming to fall apart at the seams allowing us to question their construction. We feel not only the presence of the work but the hand of the artist through this construction, influenced by the expressionist mark-making of Basquiat she scratches or picks away at the surface of her work to give it a battered effect and give these stoic figures their dynamism. It’s no wonder she holds Frankenstein’s monster up as figure she draws upon, somehow human and monstrous, of our present moment through their materials but almost prehistoric in their construction and allusion. She originally started making sculptures out of found objects as these are the cheapest and most readily available art material, and became interested with imbuing these pre-existing objects with a new function or message, working with these waste products to construct new emblems of cultural critique. 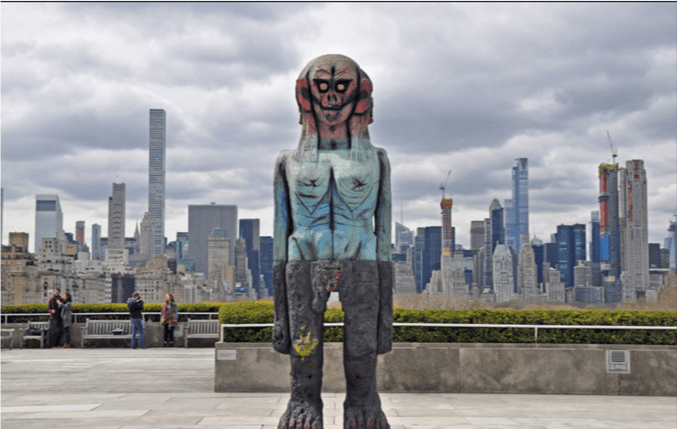 I love that what at first seems to be concrete or marble is painted Styrofoam, or the gravelly texture that carved cork gives to her sculptures which seem so grounded in the earth but actually are quite light. By blending female and male characteristics in her figures, Bhabha’s statues defy the constraints of gender and come to represent something both intrinsically human, but also threatening about our own self-alienation. This interest in transgressing expectation or straddling the line between two concepts can be seen to be a reflection of her own heritage, with her mother from Northern India and her Father growing up in Apartheid South Africa, Bhabha returns again and again to sites of division and tension. Her collection feels like a warning, the graffitied skulls on hyper-exposed photographs marking her work with a force that is threatening but also intriguing. Bhabha’s work rewards a keen eye, and the closer you look the more you are disturbed and enthralled. 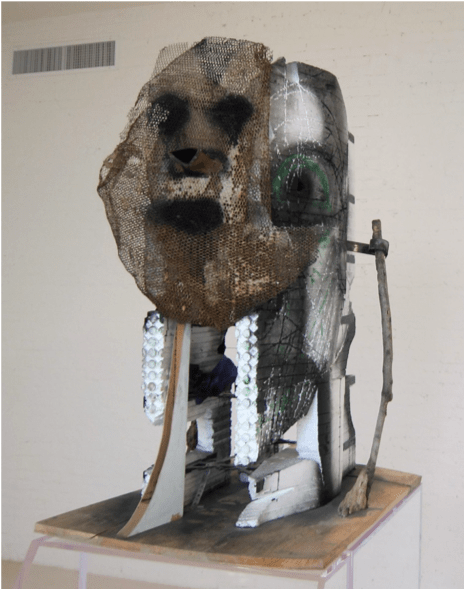 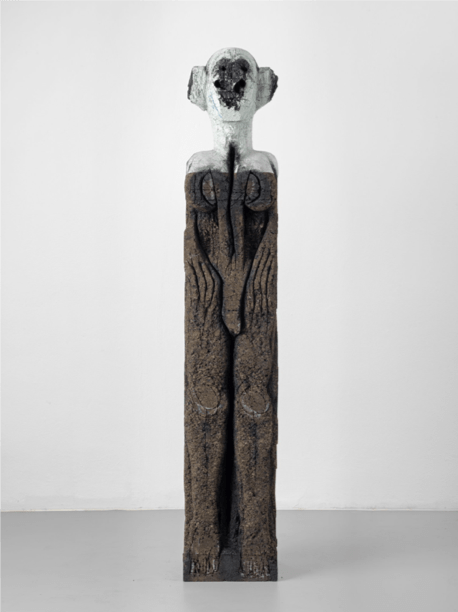 Watch a short tour of the collection here on the BALTIC YouTube Page: https://www.youtube.com/watch?v=g6yX06sW7XY&feature=youtu.be

More info about Bhabha and her exhibition can be found on the BALTIC Website: