With a modest budget that (adjusted for inflation) equates to half the average budget of a single episode of Game of Thrones, and only mustering twelve episodes in total, I, Claudius may appear to be like an unlikely contender for the title of greatest TV series of all time at first glance. However, its reception of three BAFTAs upon its broadcast, continued presence near the top of publications’ television favourites, and influence of other acclaimed productions such as Dynasty, The Sopranos, Rome, House of Cards, Game of Thrones, and Spartacus makes this 1976 BBC-produced adaptation of Robert Graves’ novel deserving of closer inspection. 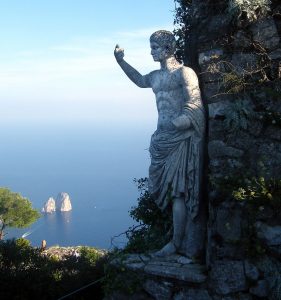 Set in Ancient Rome and depicting the deceitfulness and brutality behind the scenes of the Julio-Claudian dynasty from the reign of Augustus to the death of the narrator and titular character, Claudius, much of the show’s credit belongs to the incredible screenplay. Jack Pulman expertly weaves authentic quotes straight from Tacitus and Suetonius with the compelling drama, horror and dark humour from Graves’ novel. This is perfectly complemented by Herbert Wise’s masterful direction which develops taut suspense throughout, before delivering some of the most chilling climaxes I have ever seen in a TV show. Episode Seven, titled Reign of Terror, is perhaps the best example of this, in which the upstart Praetorian Prefect Sejanus (played by a marvellously sly Patrick Stewart) has his conspiracy exposed and met with a brutal purge of his family and supporters in a dramatic downfall that starts off satisfyingly humorous before becoming tragic and horrific.

One could very easily write a book about the quality of the acting throughout the miniseries, but conscious of my word limit, I will reluctantly constrict myself to my three favourite performances, starting with the eponymous protagonist, the Emperor Claudius. Derek Jacobi gives nothing less than a career-defining performance, firmly establishing himself in my mind as one of Britain’s finest actors. Playing Claudius from his teenage-hood to old age, his seamless transition from a twitching, stammering invalid to the cunning, somewhat curmudgeonly Emperor is performed with such believable sensitivity and shines as a true testament to the actor’s incredible versatility.

In any other production, Jacobi would have run away with the show, but I, Claudius has the advantage of boasting the magnificent Sian Philips as Livia Drusilla, the wife of Augustus. As the epicentre of the show’s court intrigue and machinations for the first six episodes, Philips is truly terrifying, yet somehow mesmerising, in her portrayal of a ruthless, calculating matriarch, a role that has since become stock character in TV drama. It is hard not to be reminded of Livia in the sadistic manipulation of the same-named Livia Soprano from The Sopranos, nor in the power-hungry ambition that drives Claire Underwood and Cersei Lannister in House of Cards and Game of Thrones respectively.

Finally, the late, great John Hurt plays the murderous, incestuous Emperor Caligula with such gleeful wickedness and unpredictability that it’s hard not to be as entertained as you are disgusted by one of history’s most reviled tyrants. He is undoubtedly the best example of I, Claudius’ inspired blend of comedy and horror.

Accustomed as we are to the big-budget extravaganzas that we have come to expect from television, the somewhat outdated production values may take some getting used to, and even appear amateurish. The show is shot almost entirely on-set, and is often dimly lit, making use of long takes with limited camera movement, while violence and sex, although positively shocking for its original audience, is hardly ever shown, mostly either being implied or happening off-screen. In my opinion, however, whether a fluke as a consequence of the budget constraints and BBC censorship or not, this all works to I, Claudius’ artistic advantage. The slow pace and pervasive darkness allows the viewer to feel truly immersed into a claustrophobic, intrusive atmosphere where none of the characters are safe from the plotting, cruelty, madness, betrayals, sexual perversion, and murders that plague the Julio-Claudian dynasty.

Moreover, at the risk of sounding prudishly conservative, as much as I enjoy shows such as Rome or Game of Thrones (both of which owe much to I, Claudius, in both their characterisations and general atmosphere and themes) I feel that both indulge far too often in gratuitous displays of violence to cheaply shock audiences. Like the most impactful depictions of psychological horror, what I, Claudius leaves to the viewers’ imagination is often more terrifying than anything that can be depicted with graphic violence and cheap scares, while also allowing attention to remain firmly on the nuanced performances and dialogue. I, Claudius exemplifies that there is no true substitute for high-quality acting, writing and direction to keep audiences on the edge of their seats.

So, that’s my assessment of the oft-imitated but seldom matched I, Claudius; the perfect marriage of soap opera camp, psychological horror and Shakespearean acting and writing. As acclaimed as it remains amongst critics and as influential for future serials, I find it a real shame that more people of my generation aren’t aware of it and I would love to see it either broadcast again on the BBC, or perhaps even remade. In 2013, plans were drawn up for a BBC and HBO collaboration (who had previously produced Rome together between 2005 and 2007), only to have seemingly become shelved. I would have been delighted to have seen something come from this, especially as I, Claudius begins virtually at the point where the second season of Rome ends.  A BBC/HBO remade I, Claudius would effectively act both as a much-desired spiritual successor to Rome, and as an introduction for younger audiences to what I consider to be the greatest TV show of all time.