All images, including the featured image, were taken by me. I have also linked to a video, which is credited in the text.

What do these all have in common?

Well, that’s easy. They’re all puzzle games that come with Nintendo Switch Online. I’ve spoken at length about NSO before, but I’ve never given a dedicated spotlight to the puzzle games that are included in this collection (though I have given an honourable mention to Dr Mario in the past).

Perhaps these games are underappreciated. But I’m not exaggerating when I say they take up the majority of my hours spent in-game for both the NES and SNES apps. They’re easy to learn, difficult to master, really addictive, but also great for playing in short bursts — and they’re very at home on the Switch. Also, this isn’t every puzzler available on the service: just the ones I wanted to talk about. 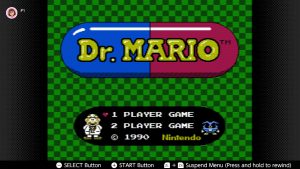 Dr Mario is certainly an interesting concept. Mario? A doctor?! The world may never know if this Mario is the same as the Mario we see in all the other games, but regardless Dr Mario is a great time. It may not be as pretty or as expansive as the two SNES offerings, but it’s an NES game — of course it wouldn’t be.

In Dr Mario, the board consists of a huge bottle full of viruses (red, blue and yellow in colour), but the exact amount of viruses depends on what level you set in the menu. The higher the level, the more viruses you have to clear, and the closer they are to the top of the bottle. The titular doctor is throwing pills, one by one, of different colour combinations (red and blue, yellow and blue or red and yellow) into the bottle, and your task is to move and/or rotate the incoming pill to get at least one side to line up with a virus of the same colour. In order to clear viruses, you need to match, vertically or horizontally, four or more pills or viruses of the same colour. 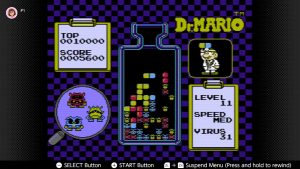 Clear the board of all viruses, and you win, but let the pills stack up so they block the neck of the bottle (easy to do on higher speeds and higher levels, where one mistake costs you the whole game), and you lose. It has nothing to do with the other Mario games (no Goombas, and notably Peach gets a day off from being kidnapped), but it makes a lot of sense for Nintendo to have chosen to brand an otherwise generic Tetris-clone with their mascot. It looks pretty good as a later NES title, it has a catchy soundtrack (only two songs, ‘Fever’ and ‘Chill’, but definitely quality over quantity), and despite the lack of a Game B, it’s so easy to go into a zenlike state on your quest to beat level 20. 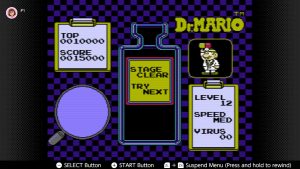 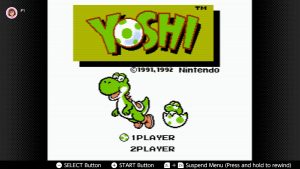 This is probably my least favourite out of the games I’m discussing today. It’s still a decent puzzle game, but in my mind it’s not quite as nuanced as the rest. Compared to Dr Mario, it’s not so polished-looking, either (that lurid green background on Game A makes my eyes sting).

However. It’s fine. We’ve got the whole falling block situation again, and in this case the blocks consist of enemies from the Mario side scrollers — Goombas, Piranha Plants, and the like — as well as the top and bottom halves of egg shells, which you have to reunite by lining the halves up (the result is a Baby Yoshi will hatch…!). For Game A, the board is empty at the start of the game, and the aim is to match two of the same enemy, or the aforementioned egg shells. If the top of the board overflows, you lose. 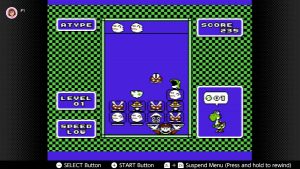 Mario can swap the ‘blocks’ around at the bottom of the screen to allow them to match up with the ones incoming, and you can even create a sandwich by having the lower half of the egg shell at the bottom of a stack, and the upper half at the top. For Game B, it’s much the same, but you start with the bottom row already filled, it’s timed, and you need to clear the board to win, rather than just playing indefinitely. It’s also got a far nicer purple and blue background, but that’s besides the point. 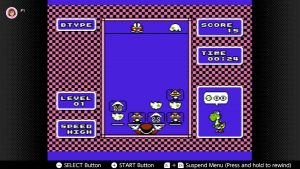 I really like the swapping element: it means you have to juggle all four columns and keep a close eye on what’s going on. But I don’t necessarily think I would have bought this game as a standalone purchase: it’s just not quite as engaging as the others on the list. Definitely still worth a try though, even if it’s only for the Baby Yoshis. 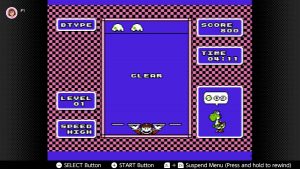 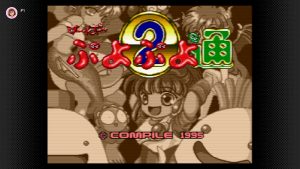 The last two games I’m discussing here are not translated from Japanese, at least not as they appear in this collection. With Puyo Puyo, the first game was translated for the West, but under two guises: the Nintendo-flavoured version being Kirby’s Avalanche (Kirby’s Ghost Trap in Europe), and the Sega-flavoured version being Dr Robotnik’s Mean Bean Machine. With Puyo Puyo 2, a few crucial new gameplay elements really make this title pop.

So just like Dr Mario, you have blocks of different colours that fall stuck together in pairs. Your aim is to chain four or more of the same colour. Here, though, the blocks are not pills, but ‘puyos’. In the VS, story or two player modes, you can send clear, ‘nuisance’ puyos over to your opponent (and vice versa) by making a chain of more than four, and they make life a lot harder because they have to be cleared too, by clearing puyos directly adjacent to them. 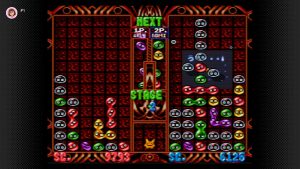 You can mitigate this, though, if you manage to make a chain before the nuisance puyos drop into your board. This is new to Puyo Puyo 2, and it genuinely makes it so much more exciting. In Dr Mario’s multiplayer mode, clearing enough pills in one go sends two halves of a pill over to your opponent, that fall in random places and can completely mess up their strategy. Puyo Puyo 2, however, shows how fun the ability to strike back can be. Similarly to the other games, you lose if the board overflows, but specifically it’s the third column from the left that you have to watch out for. 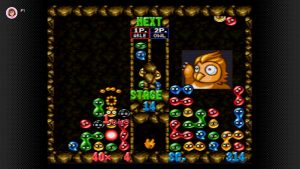 The aforementioned story mode is, of course, untranslated, but you can guess what’s happening. The protagonist, Arle, progresses up a tower, defeating all manner of weird and wonderful opponents. The higher you go, the faster it gets. It gets absolutely chaotic pretty quickly, but the thing I’ve learned with Puyo Puyo 2 is to put strategy to one side — just get them matched as fast as possible, and you’ll probably win. 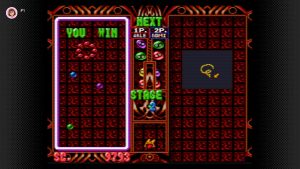 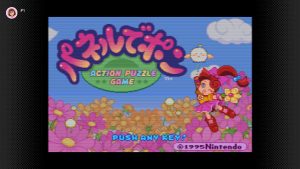 Nintendo Life on YouTube made a really interesting video about the history of Panel de Pon. Like with Puyo Puyo 2, it was translated for the West under a different guise — Tetris Attack. But this isn’t anything like Tetris. (The Tetris Company actually regrets letting Nintendo use this branding, and so Tetris Attack has never been rereleased).

Panel de Pon is a bit different from the others, in that the blocks rise from the bottom of the board. Like Puyo Puyo 2, however, it really shines in its VS / story mode. It is another tile-matching puzzle, so you need to make combos of three or more blocks of the same colour, but you can only swap blocks horizontally as they rise up. 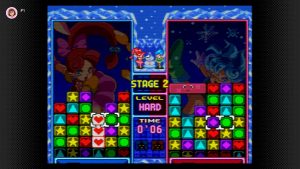 When you’re playing against an opponent (CPU or real), matching four or more blocks sends a big block over to your opponent (like the nuisance puyos). The more combos you make, the bigger the nuisance block gets, so you can pretty much end their game in seconds if you’re good enough. There’s no way of mitigating this, but when you clear blocks adjacent to them, they turn into regular blocks, allowing you to make some combos of your own and get back at your opponent. If your board overflows, you lose. 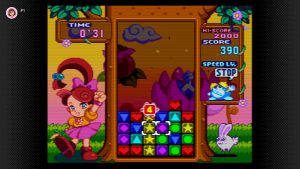 One of the other solo modes in Panel de Pon

The thing I like most about Panel de Pon is the presentation. It takes place in some sort of mythical land, and Lip, the protagonist, must defeat her fellow fairies who have been corrupted by some evil force (who you also defeat — pretty dark for a puzzle game, if I’m honest). It’s interesting, therefore, that Lip and friends have never really been seen outside of Japan before now. The aforementioned Tetris Attack abandoned the fairies in favour of a Yoshi’s Island vibe, but kept the music. Pokemon Puzzle League on the Nintendo 64 is another reskin with slightly different-looking blocks, and subsequent releases of the game, in the West at least, use a generic Puzzle League branding. 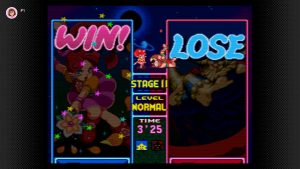 So, I think there are two lessons here. The first: these puzzle games are all worth trying, if you have the means.

And the second: if you’re making a puzzle game, just pick a name and stick to it. Please.