Amy Campbell in Uncategorized on 11 January, 2019. 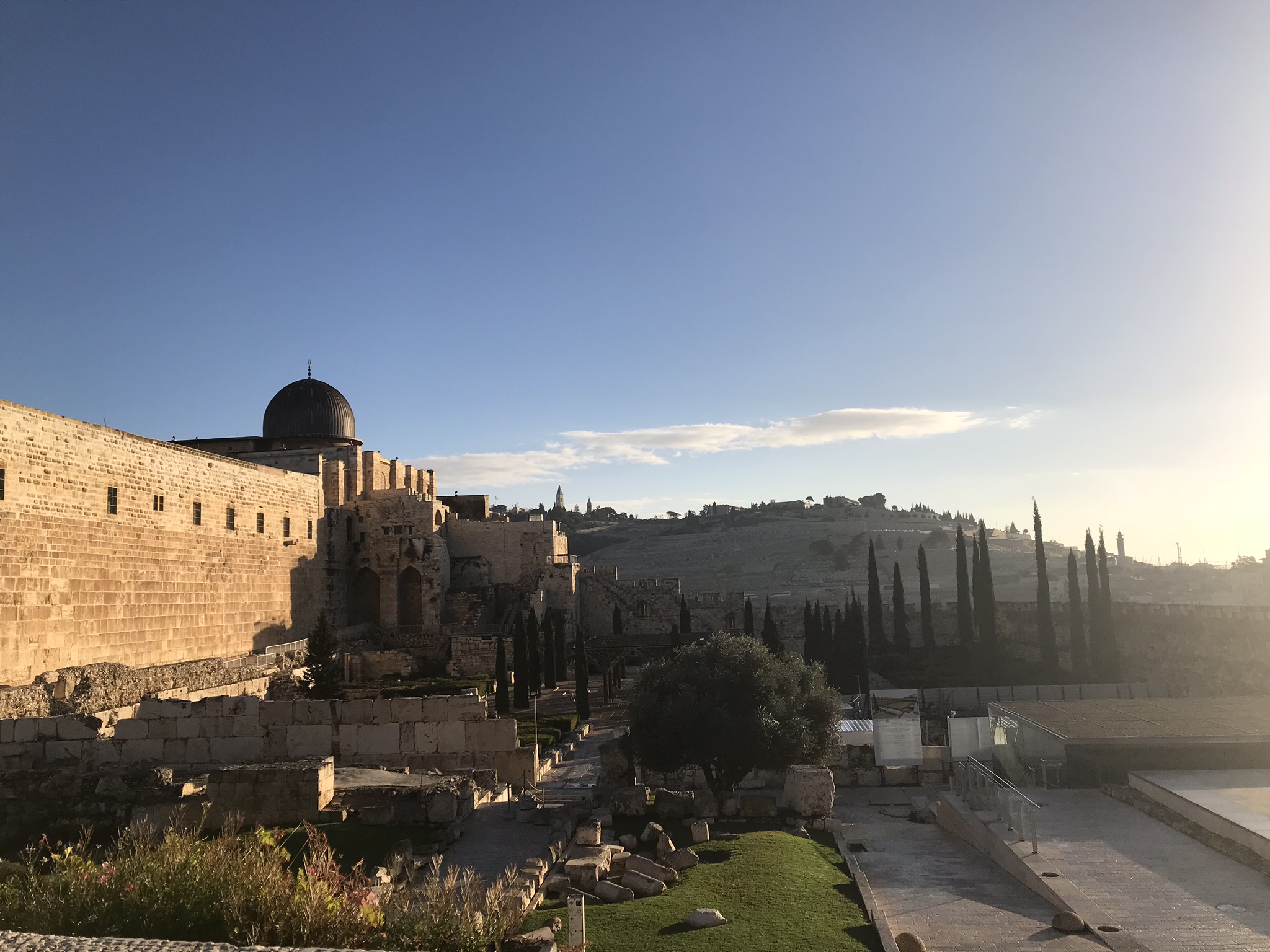 Please note: this article merely reflects my own experiences, and my own opinions. Thank you to the Union of Jewish Students for permission to write this article, and for the trip of a lifetime. Thank you Hadara Arbel for being an incredibly informative guide and for answering all of my questions, and many thanks to Shaked Hasson, the Leader of Young Labor’s Tel Aviv branch for the deep insight and conversations after the trip.

I cannot even briefly cover the history of the conflict in this article; however, I will be drawing on the most popular narratives in the Israeli/Palestinian conflict:

The Palestinian narrative: focussing on the deep sense of injustice and atrocities from the dispossession.

The Jewish narrative: stemming from the Holocaust, from migration- but we mustn’t forget the escalation of extreme Zionism, increasing power, and recent nation-state law.

The Israeli narrative: focussing on their long-term attachment to the land, legitimacy granted by the UN partition plan, hostility and threat of war from neighbouring countries. However, we shouldn’t forget the immense violence, power, rejection of peace offers and disregarding of the Palestinian population. 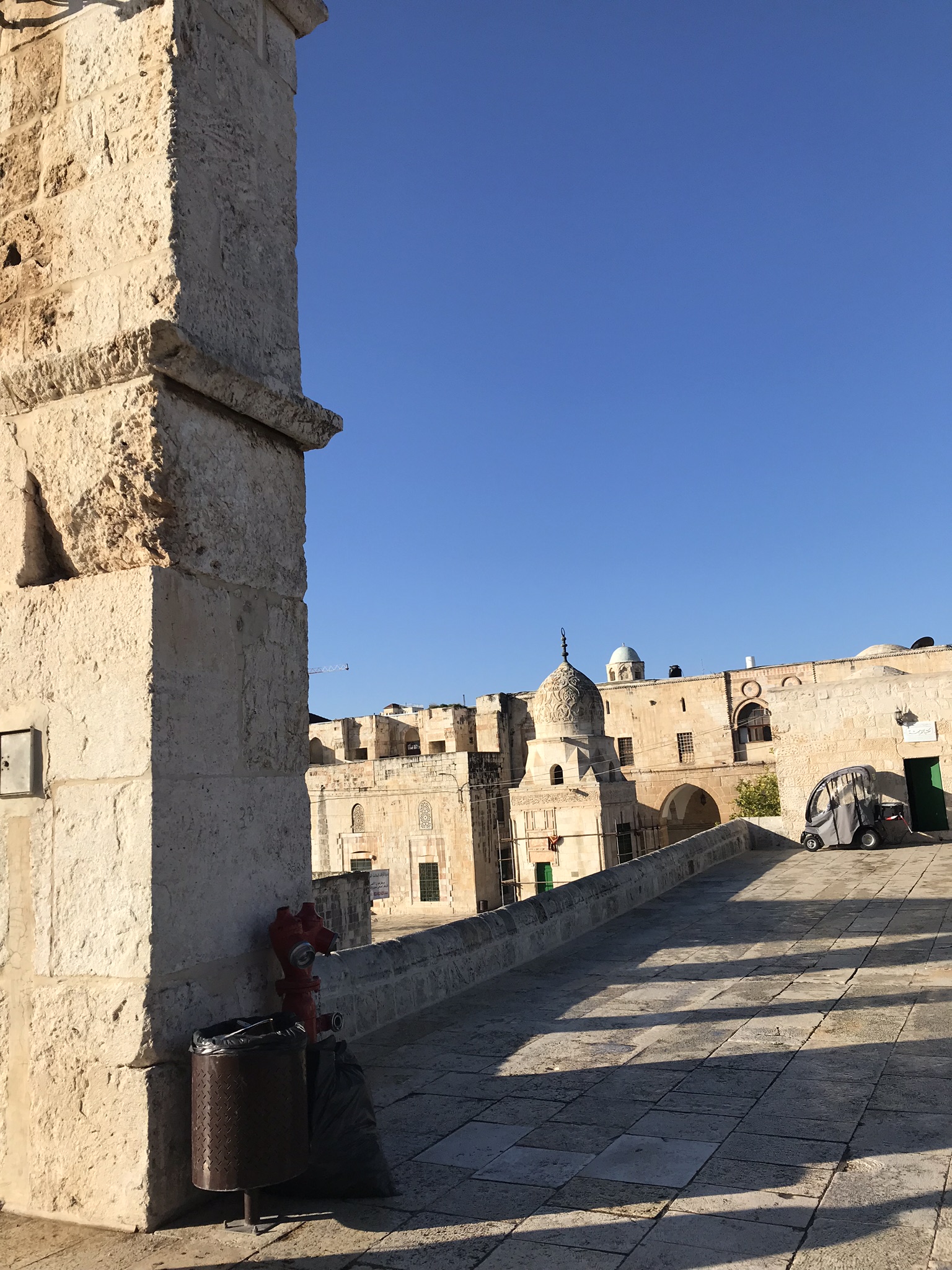 Jerusalem, Temple Mount and the Old City. One thing I must note, is that upon arriving in Jerusalem, it was incredibly quiet and beautiful. Only when we began to visit the sites of contestation, and we spoke to more and more people, did the underlying conflict become starkly apparent. East Jerusalem contains Temple Mount, the Western Wall, Al-Aqsa Mosque, Dome of the Rock, and the Church of the Holy Sepulchre and has been occupied by Israel since the Arab Israeli War. The flag of Israel flying at the Western Wall; Photograph: Amy Campbell

demonstrated these underlying political tensions, Temple Mount is of great holy importance to all three Abrahamic religions, however Jerusalem is 60% Jewish.

Palestine regards East Jerusalem as the capital of a future Palestinian state. The Palestine Liberation Organisation’s (PLO) ‘Palestinian Declaration of Independence of 1988’ stated Jerusalem to be the capital of Palestine approved by Arafat, however, Israel shut down PLO in Israel. In UN resolutions it is referred to as part of Palestine’s territory, but it is currently run by Israel (condemned by UNSC resolutions 478 and 181). East Jerusalem is a prime example of the complexities in Israel. Any Jewish symbols (i.e. the Star of David) must be taken off to be granted entry through the Mugrabhi gate, and you have to be of Islamic Faith to go inside the Al-Aqsa mosque. It was clear to me that the running of Temple Mount must change. As suggested by Hadara, it seems the most pragmatic solution to hand control of the Mount to the future leader of the Palestinian People, including prayer and visitation rights for all faiths. In my opinion the Western Wall should remain under Jewish control, with a special council made of representatives from both sides for maintenance and security reasons. It also seems fairer to have an open entrance for Non-Muslims from any gate.

The Old City: Three religions living in one extremely tightly packed city. Sitting on the rooftop of the Old City at the exact position where all faiths; Christian quarter, Jewish quarter, Muslim Quarter, and Armenian Quarter, intersected. It was completely peaceful, with a deep sense of normality, seeing a Orthodox Jewish child ride his bicycle across the rooftop really showed how despite the conflict going on, people in Israel lead normal lives. 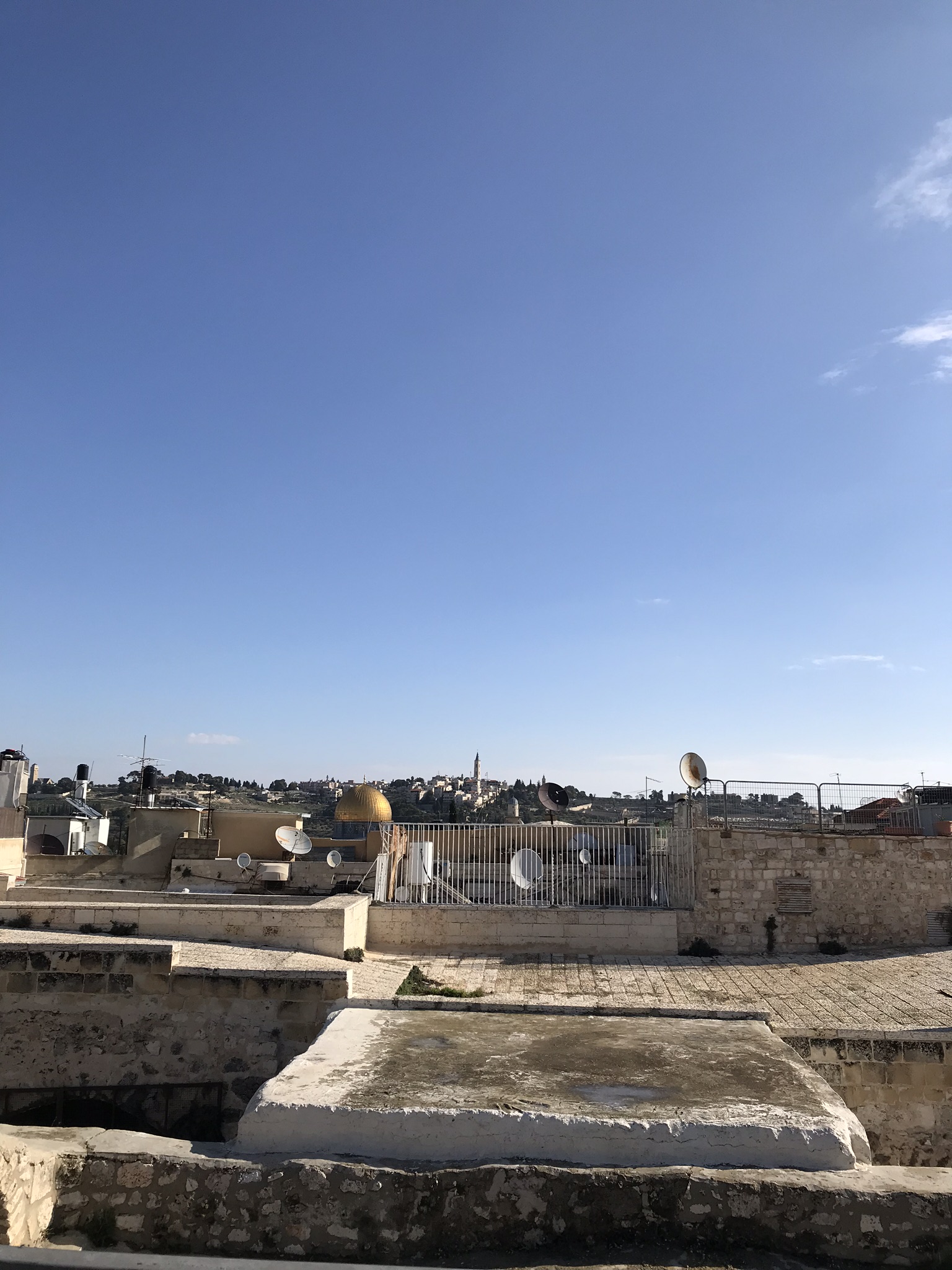 The markets in the Old City: Photograph; Amy Campbell (A panning video of the rooftops in Jerusalem)

At Maghar, we met Daniel Salame, the correspondent for Arab Affairs at YNET (a leading Israeli news outlet) from the Druze Village Julis. The Druze , around 130,000 strong, are a small tight knit religious community. The Druze don’t permit conversion, you are strongly encouraged not to marry outside of the Druze faith, religious practice is secret. It is an eclectic faith, they claim to have incorporated the holiest elements of Shia Islam, Gnosticism, Neoplatonism, Pythagoreaism, and Hinduism. The Druze sided with the Jewish forces in 1948, and have fought for Israel in every Arab-Israeli war. 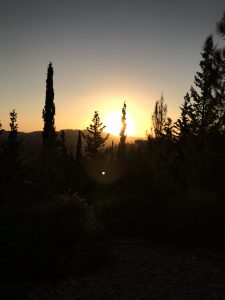 The Yad Vashem Holocaust Museum completely changed my perspective on the Holocaust (having studied it academically),with a focus on personal stories and experiences from the region which took thousands of Jews in after WWII. The children’s memorial (Yal Layeled), and Valley of the communities which records the names of the Communities destroyed in the Holocaust are completely unique to Yad Vashem. It was the most moving Holocaust museum I have ever visited.

Mount Herzl: the burial place of Israel’s founding fathers and Jerusalem’s military cemetery opened another perspective on Israel. Learning about liberal, religious and socialist Zionism opened a different dimension to the conflict, as well as appreciating that compulsory military service (for both genders) for a lot of Israelis isn’t wholly negative. 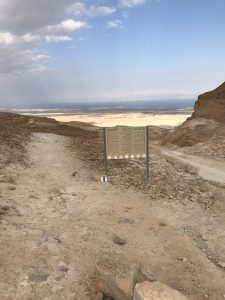 Masada, in the Jordanian mountains. Masada is a key educational site, and a controversial symbol of self-reflection for Jews and Israeli’s, as to whether the Jews really were heroes in the face of a siege by the Roman army in 73 AD. From a Jewish perspective, Masada is often used as a political tool to send a message of the need for a strong, self-defended Jewish home in Israel. Meeting with the former mayor of Bethlehem; she was proud of the Christian population in Bethlehem despite it declining in recent years. Her inspirational speech plead that we open the conversation about the conflict in the UK, and do everything we can to put ourselves in a position to make change, to alleviate the situation for the Palestinians. 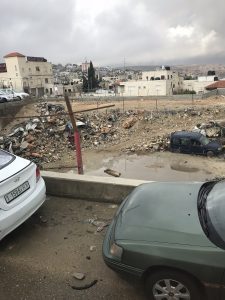 ‘No Man’s Land’, at the border of Ramallah: Credit; Amy Campbell

Crossing the border to Ramallah: we passed ‘No Man’s Land’, an area which in my opinion should be controlled by Palestinian authorities , in collaboration with Israel in terms of security. A Palestinian explained to us just how atrocious the situation is, Palestinians in East Jerusalem can’t vote in Israeli national elections or obtain Israeli passports. Palestinians living in West Bank and Gaza literally have their lives controlled by Israel. The security crossing the border was very strict, we were exposed first hand to the nation state law, implemented by Netanyahu. The law largely legitimises racism , and subjugates the Israeli Arabs in favour of the Jews, and discriminates against the Druze community.

The border of Gaza strip: Gaza is run by Hamas(Palestinian Sunni-Islamic fundamentalists). There is restricted freedom of movement from Egypt, underground tunnels have been destroyed, it has the highest unemployment rate in the World Bank’s development database, a struggling education system, one of the highest population densities in the world, and a struggling sewage system. Right now, the Welfare Association is calling for an ‘Emergency Winter Appeal’ in Gaza.

Just a kilometre from the border of Gaza Strip we visited a Kibbutz (a Jewish socialist community) in Kfar Aza, and met with Chen Kotler Abrahams. Her community and family live in constant fear of threats from Hamas fighters. But these threats don’t just consist of rockets. Balloons are sent over the border, with tampons, condoms and hand grenades attached; the aim for Hamas is terror. With the alarm system, they have ten seconds to run to a bomb shelter, Abrahams said during rocket fire earlier in the year her sister only had time to “grab one child”. She still chooses to live there. Hezbollah; Lieutenant colonel (Res.) Guy Malal at the Syrian headquarters in Quneitra explained the Israel-Lebanese conflict, and growing power of Hezbollah. Although Israel withdrew from Southern Lebanon in 2000, the ownership of 13 points along the international border is still contested by Lebanon and Hezbollah.

1,300 feet below sea level en route to the Dead Sea, it became apparent just how innovative and modern the state of Israel is, and how Israel shouldn’t just be defined by the conflict. 60% of Israelis land is desert, the rest is arid, rainfall is at half of its 1948 average- yet 90% of its water is recycled, and it has enough water to use it as a political tool of leverage against Jordan. It also uses drip irrigation for maximum efficiency, and treated sewage for irrigation. Assassination of Rabin graffiti in Tel Aviv, one of the only murals to not be painted over: Credit; Amy Campbell

The future of Israel

In Tel Aviv;  watching a political panel, with a member from the right-wing Likud, from the Centre, and the labour party of Israel was fascinating. Shaked from Labour gave me hope for the future of Israel and tied together everything I’d seen during the week.

She expressed vehement determination to reverse the nation state law, to separate religion from politics, secularise the education system, move the control of Temple Mount from Jordan to the Palestinians, and reduce living costs in Israel.

Until there is a left-wing government in power, until there is freedom of movement within Israel for all citizens and religions, freedom of access to all religious sites, and most importantly regular elections, the situation in Israel will continue to deteriorate.