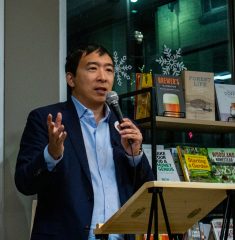 Andrew Yang is the Democratic candidate no-one is talking about. You should be.