“Are we not, as the citizens of the United States, the owners of this country?” (Andrew Yang, The War on Normal People)

The initial stages of the Democratic nomination process have largely been dominated by coverage of Bernie Sanders, Kamala Harris and Elizabeth Warren. Joe Biden is touted as a potential candidate and it is speculated that there could be up to 20 candidates come debate time. In such a splintered field, there are always candidates who you’ve never heard of. One such candidate is Andrew Yang. And he’s bringing something new to the table. Something that no-one – left or right – is talking about.

Who is Andrew Yang? Andrew Yang is an entrepreneur and the founder of the company Venture for America which runs a fellowship programme designed to help university graduates wanting to become start-up founders and entrepreneurs.

In November 2017, Andrew Yang filed to run for the 2020 Presidency. At this time, he was a complete unknown as regards politics, on both a local and national level. He is still a relative unknown but is swiftly gaining traction on non-mainstream forms of media. He has appeared on Sam Harris’s podcast, on TYT and on the David Pakman show. Only last week he was on the Joe Rogan podcast. What’s the common denominator? YouTube. Andrew Yang is utilising the power of YouTube to swiftly disseminate his message to millions. His podcast with Joe Rogan currently sits at 2.1 million views. He has also appeared multiple times on Fox News. An aberration in modern politics.

“The future without jobs will come to resemble either the cultivated benevolence of Star Trek or the desperate scramble for resources of Mad Max.” (Andrew Yang, The War on Normal People)

The threat of automation is the reason why Yang initially decided to get involved in the race to the Presidency. After meeting with policy makers in Washington, Yang realised that there was no plan to deal with the impending automation crisis. He realised that we need to ‘change the way the economy works’. How to do this? Take control of the Government. How to do that: Become President.

Andrew Yang’s front-and-center policy is UBI: Universal Basic Income. He proposes giving $1000 dollars a month to every American adult. The money isn’t required to be spent on anything in particular and isn’t means tested. In other words, both rich and poor would receive it. It would also be opt-in and wouldn’t stack on other benefits. If you were to receive $700 dollars/month in food stamps and other federal income support, you would only receive an extra $300, thus totaling $1000. 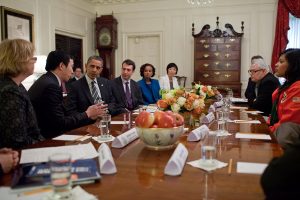 UBI is a policy advocated for by the renowned economist Milton Friedman, Martin Luther-King Jr, Thomas Payne (one of the Founding Fathers), Elon Musk and even Barack Obama has shown support for it, mentioning it in both 2016 and 2018 as a potential solution to coming economic disruption.

Andrew Yang proposes that UBI would alleviate several significant pressures on everyday Americans, as well helping steel them against the incoming wave of automation which is being part enabled by Artificial Intelligence. The majority of Americans are high-school graduates with only 42% of population holding a bachelor’s or associates degree. What’s the common denominator among the jobs held by those high-school graduates? Their jobs will be the first to be automated away. Truck drivers, call-centre workers, manufacturing workers all left unemployed. Truck driving is the most popular job in 29 of the 50 States. The impact of 3.5 million truck drivers losing their jobs rapidly would be catastrophic. This is a demographic with an average age of 55, a high-school diploma, a life expectancy of 61 and are often veterans with associated trauma. In other words, this is not a demographic that is capable of rapidly retraining. A radical solution is a must.

“It is impossible to overstate the importance of truck drivers to regional economies around the country.” (Andrew Yang, The War on Normal People).

A common answer I get when I ask friends if they have heard of Andrew Yang is: no. These friends are British and so are less likely to have heard of him than our American counterparts but nevertheless this highlights one thing: Andrew Yang has no name recognition. However, all is not lost. Having secured the 65,000 individual donations required to get into the Democratic Primary debates, he will be on stage in front of millions. Millions of people will hear his message. Andrew Yang’s message is one that needs to be heard and he could well be the Bernie Sanders of 2019 and beyond. Win or lose, his message needs to be heard. Keep an eye on Andrew and his campaign, I certainly am.