Since the release of the much-anticipated Cyberpunk 2077 on December 10th the Polish studio has faced a constant stream of criticism over the state of the game at release and the way in which the company attempted to hide the game’s issues through their marketing campaign.

CD Projekt SA Chief Executive Officer, Marcin Iwiński offered a public apology to fans who were disappointed that a game they had waited 8 years for, released in a state that is borderline unplayable on last generation consoles.

In the five-minute video, Iwiński acknowledged that the game “did not meet the quality standard we wanted to meet. I and the entire leadership team are deeply sorry for this” and called for fans to direct their anger at management, rather than the developers. This is a continuation of what CDPR have tried for the last month as they attempt to restore their reputation with their fans and investors. 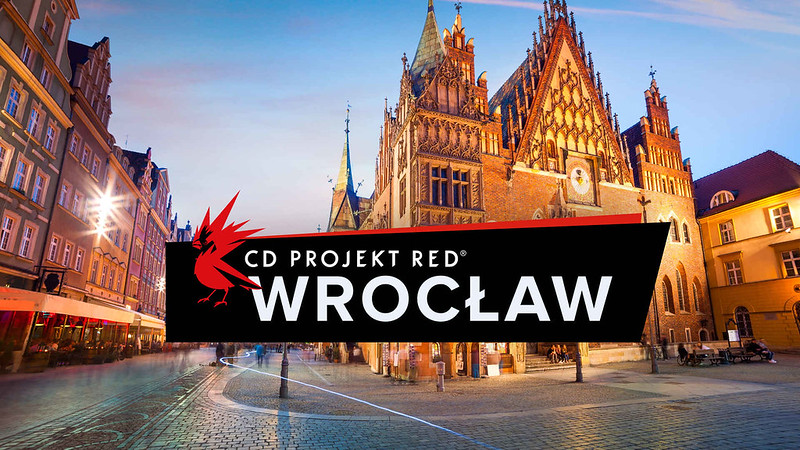 Damage control has been the focus this last month, as public perception is at an all time low (Source: steamXO via Flickr)

However, new reports have surfaced which suggest that the bugginess of the game was a known issue to developers before launch, a story which differs from the story Iwiński offered.

In the video, Iwiński claims that whilst the company did test the game prior to release, they did not experience the same number of issues players contended with. Many gamers have expressed doubt over this and new findings support this skepticism, as developers have claimed that many problems were discovered but they simply “didn’t have time to fix them” before launch.

With focus being made on impressing fans and the media, CDPR invested heavily in their E3 demos which wowed fans and media outlets. However, this has since highlighted several features missing from the released game such as wall-climbing and the ability to purchase property etc. Schreier claims that when the E3 footage was shown, many of the gameplay systems were not yet finalised. Developers said that the demo felt like a “waste of months” that could have been better used toward making the game. 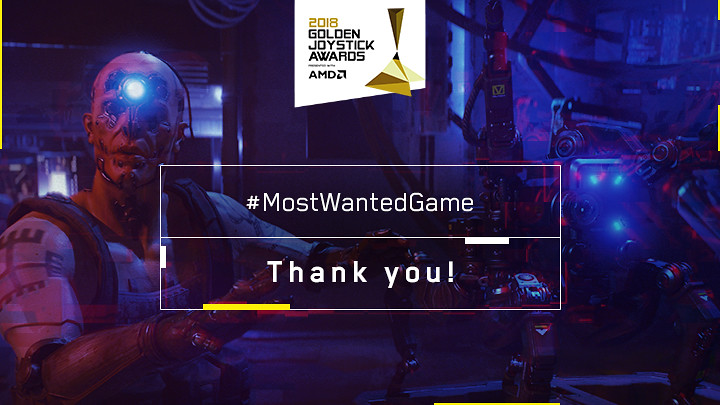 Employees who were already crunching and had been for some time, faced another problem when it was initially announced that the game would launch on April 16, 2020. Members of the team at CDPR were left confused as some estimated the game would be “ready in 2022.”

With a timeline that was becoming increasingly more unrealistic, management were reluctant to delay. But by the end of 2019 it was obvious that the game simply was not ready and the game was moved from April to September. Yet with difficulties posed by COVID-19, that release date was moved again to November.

When the game went gold in October (the time when a game is ready to be pressed to disks) major bugs were “still being discovered” and another delay was necessary, this time for three weeks, as developers desperately attempted to get the game ready.

This proved to be helpless, as players experienced numerous problems at launch and social media flooded with video compilations of bugs currently in the game.

Responding to Schreier’s article, game director Adam Badowksi responded on Twitter in which he disputes three claims made by the article. 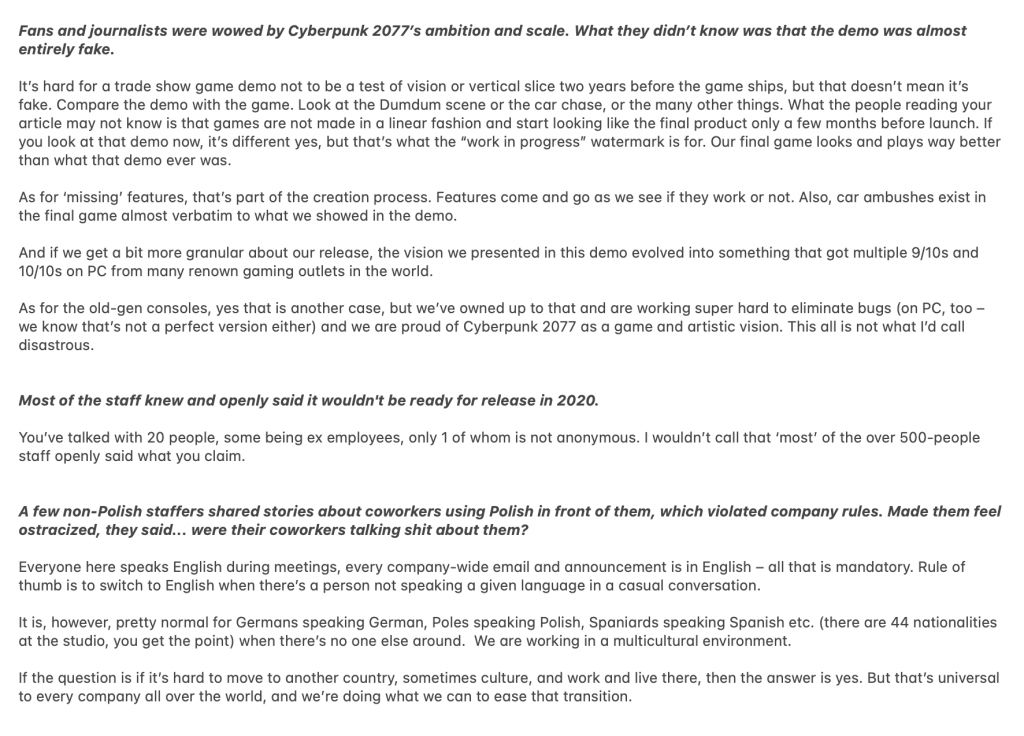 On the matter of the E3 demos being “fake”, Badowski states that “Games are not made in a linear fashion and start looking like the final product only a few months before launch. If you look at that demo now, it’s different yes, but that’s what the ‘work in progress’ watermark is for. Our final game looks and plays way better than what that demo ever was.”

He disputes claims of the launch being a “disaster”, pointing to the reception the game got on PC (Which is the most stable platform to play the game on currently). It is important to note that this does not address the fact that Sony Corp., have removed the game entirely from their online store and Microsoft have placed a warning before purchase of the problems players may face.

Finally, Badowksi insists that the feelings of 20 developers are not indicative of the full team’s feelings, as CDPR is made up of over 500 people.

In response to Badowski, Schreier noted that CD Projekt Red declined to comment on the original article and that Badowski did not address claims of an unrealistic timeline or crunch in his statement. 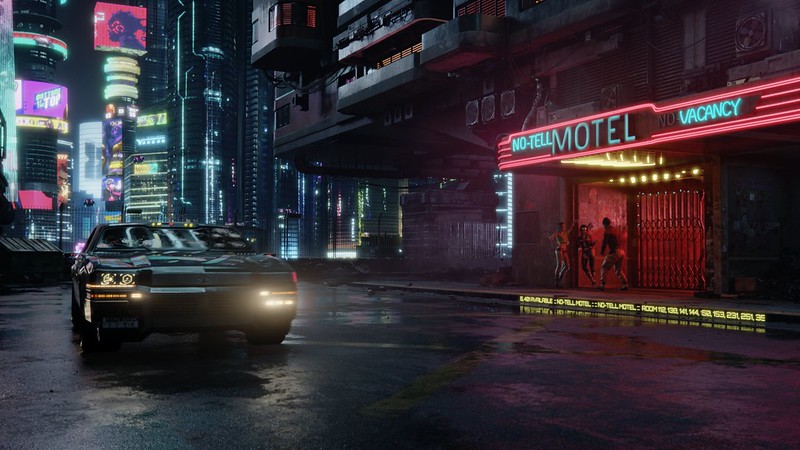 Underneath the bugs lies a great product, but until the issues are fixed, only a small section of players can appreciate it right now (Source: Instacodez via Flickr)

It is clear that CDPR have much to do to earn back the trust they had built from their previous titles, and it is not unknown for games with a rocky launch to later gain critical acclaim (No Man’s Sky, Destiny etc.) but this will not be easy for the studio and it may not be enough to sate the investors who have already launched a class action lawsuit again the company, claiming that they were “misled” over the state of the game on last generation consoles.