Q is for Questions 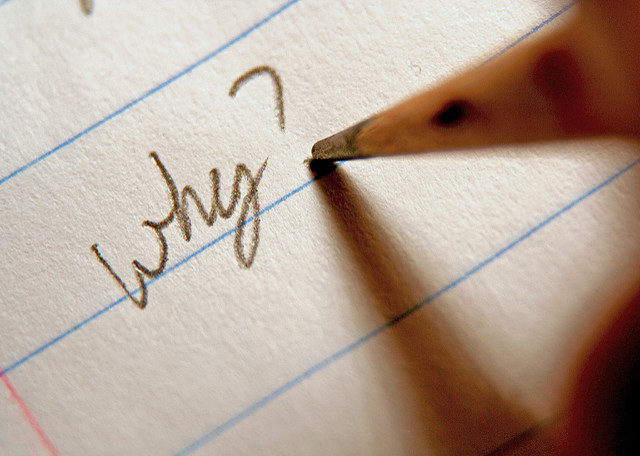 a sentence worded or expressed so as to elicit information.

Questions. I’m not particularly good at answering or asking them. I’m not good at answering them because most of the time I don’t think that I know enough to answer them. It feels like my brain is not fit to be filled up with all of the information that the world seems to offer. For example, if a small child were to ask me why the sky is blue, it would take me far too long to reply with a smile and absolute silence. I’d probably tell them to Google it and if it looked like they didn’t have a phone, I’d Google it for them. Google knows everything.

I’m not very good at asking questions because, like any other indecisive person with low self-esteem, I am afraid of looking stupid. Who hasn’t gone through that stage in life? Especially at university, when you suppose you should know most of the things that you have questions are about. You must’ve had these moments in tutorials or seminars when you don’t really understand what is happening but everyone looks really focussed and therefore you shrug the question off and tell yourself that you’ll look think about it in more detail later. No?

But questions are interesting and questions are what lead you through some of the most intriguing paths your mind can follow—I know that sounds cliché and regurgitated and I probably should be cringing while I’m writing this but, since it is true, I am not. I may be. Slightly.

The thing about questions is that there are so many of them, they are never ending, and they have so many different usages. Whether it’s to look for information, to evaluate certain things, to gain rapport, to see how information you have gathered can be used—you can use questions to get informed of everything and anything. They don’t even necessarily need answers, do they? Sometimes it’s just the process of thinking about what could be right, what could be wrong, that makes it an enjoyable experience. Letting your mind run off to weird places you never knew it could; places you may not have necessarily wanted to go but went anyway.

But I think my favourite question has got to be “Why?” It’s the most annoying question if you are faced with the difficult task of answering it, but if you’re the one asking that question you have almost too much fun. It’s unending. It can go one forever. Why is the sky blue? [Insert answer here]. Why? [Insert answer explaining previous answer]. Why? [Insert more what I presume to be more scientific stuff to explain the explanation], etc. You get the drift. This isn’t something that only children can do for fun.

So I’ll just end with a few “why” questions that have been milling around in my head for the past few weeks, days, hours, minutes. They’re not everything, but then again, one can never really run out.

Why do some people just sound like they are so sure of everything, while I always find a way to doubt myself? Why are some people so obsessed with themselves that they fail to realise that what they feel and believe may not be the most popular opinion? Why do people find it so hard to empathise with other people? Why can’t people see that they are wrong? Why do I have to feel like all of my opinions have to be validated because I feel the need to persuade everyone, while some people don’t even try?

Why should it be okay for 17 people to die in another mass shooting. Why should there have been 18 school shootings in 2018 in America when it’s only February. Why should people have to see news like this so often that it’s getting to the point where we feel the pain less. Why doesn’t it stop. Why can’t it stop.