I feel I should start this article by admitting, I am not vegan and could not claim to be an expert in vegan foods or substitutions. I do however, like trying new things; so when I saw the Claypath Delicatessen advertising a three course vegan meal, it seemed like the perfect opportunity for me and my newly vegan boyfriend to go out for dinner.

For starter I had their mezze, with homemade hummus, dolmades and a salad. The homemade hummus was delicious but my favourite was definitely the dolmades, which is a stuffed vine leaf. They had a lovely texture and flavour and I definitely could have eaten way more than the three they gave me. 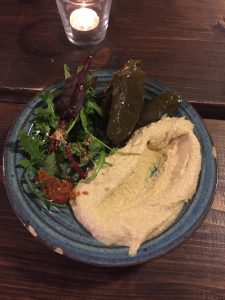 Mezze with hummus and dolmades

The star of the show was the vegan pizza, with homemade mozzarella. I picked the olive, rocket and roasted tomato pizza, and it was delicious. (You could also have had plain margherita or garlic mushroom). The pizza base itself was thick, fluffy and delicious. But it was the mozzarella I was most curious about. I have to say I was pleasantly surprised and impressed. It tasted incredibly similar to dairy-milk mozzarella and although the texture was slightly different, I would definitely have it again. It also came with a side salad that had bread soaked in a flavoured oil – unusual texture but fantastic taste that went really well with everything else. 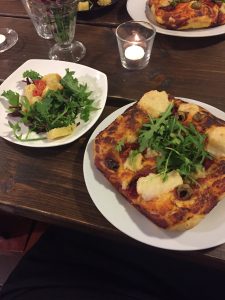 I picked the banana and walnut cake for dessert, which came with an ice cream. The cake was moist, and tasted fantastic – you probably wouldn’t guess it was vegan if you didn’t already know. I wasn’t personally sure about the taste of the ice cream, but I think that comes down to individual preferences, as the texture was lovely and creamy. 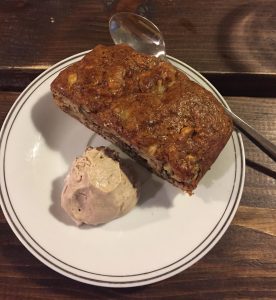 Overall, the dinner was really yummy and has given me a new appreciation of vegan food. It doesn’t have to feel like you are missing out by cutting certain things from your diet; which I think is probably a common misconception. It was a very popular night and was busy at all times, so hopefully the success means the Claypath Deli would consider putting more vegan menu nights on, with even more things to try. It’s also worth adding that this was an excellent price – only £15 for three courses, and I left feeling very full. I would definitely go again, and would encourage other people to as well, if for no other reason than to try something new.