‘I, too’: marginalised American identities in poetry (part two)

All three poems allude to earlier poets. Ginsberg notably references Whitman, ‘the great national poet’[1]. Waggoner states this is not because of Whitman’s connections with patriotism but because he was a poet who reconciled being an American and being an outsider: ‘Whitman openly walked hand in hand with his love of country whilst at the same time suggesting resistance in the name of such love’[2]. Ginsberg is also indebted to Whitman in terms of poetic structure. Both make use of extended sentences in free verse irregular stanzas. There is variation in the use of sentence length through America,with Ginsberg beginning with a 46-line stanza of endstopped lines, creating what seems a straightforward address to America, before the poem breaks down and the narrative voice is instead ‘talking to myself again’[3]. Later, shorter stanzas become filled with enjambment and caesura, mimicking an increasingly fragmented perspective. The sentence structure in the opening stanza links to Whitman. Warner argues that Whitman ‘minimises the feeling of arbitrariness (with line breaks) … because his lines are almost always end-stopped; he treats them as units of sound as much as of sense’[4], linking poetry to the oratory. This almost “breathes” the coming personal knowledge ‘I am America’[5]from beginning with America as a separate entity. This musicality and the ‘refrain’ in the parallelism of Americaalso links to Ginsberg’s interest in jazz music. Hughes also uses jazz to influence his work in a more direct fashion. 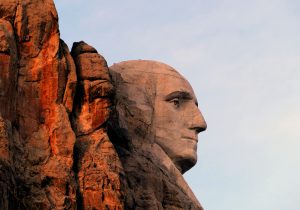 Referencing a modern counter-culture form of music shows these poets to be ‘singing’ celebrations of their own histories, whilst simultaneously referencing Whitman ties them into a historic narrative. Whitman also unites ‘the varied carols’[6]of America in I Hear America Singing. These poets may likewise use music to consolidate people, but as Ginsberg and Hughes use a music at the time associated with a niche of society this idea of unity is lessened to ensure that the voices of marginalised communities are heard. Indeed, Hughes begins his poem with “I, too, sing America’[7]. This seems a direct response to Whitman whose ‘mechanics’, ‘carpenter’, ‘mason’[8]are all raceless but presumably in the “master-narrative” of America, white. Bloom states that this connection is positive and helps ‘assert participation in the creative act, an assertion that counters the speaker’s marginalised position in the poem’[9]celebrating the “work” of poetry like Whitman celebrates ‘the delicious singing’[10]of the workmen. However, Rampersad claims instead that this ‘departs from Whitman’s celebrated chant’ through its ‘unhappy mood’[11]. Though there is clear links to Whitman, Rampersad has some truth; as Hughes relates to jazz in the structure of his poems, it would make sense that he also mimics the tone of the music, which balances the extreme highs and lows of existence. Indeed, Chinitz writes that ‘Hughes sought to catch this “blues-spirit” – this compensatory expression of conflicting emotions – in his poetry, in part by imitating the blues themselves’[12]. The repeated refrain, like Ginsberg, with slight variation at beginning and end of ‘I, too, […] America’ further relates the poem to music.

Like Ginsberg, Joy Harjo seems to harken back to Whitman’s extension of the sentence in An American Sunrise, where no lines at all are endstopped apart from the final, single word line.  Yet this reference to tradition seems antithetical when this poem is what Terrance Hayes calls ‘a shovel poem’[13]for Gwendolyn Brooks We Real Cool[14]. A ‘shovel poem’ uses the words in an existing poem to end each line of the new poem. This antithesis between ‘old’ and ‘new’ narratives of America may link to the re-telling of “master-narrative” history Harjo gives in the poem, with the Native American’s being the true ‘old’ America, and connects her counter narrative to that of African Americans. She states Native Americans underpin the jazz that enthrals Ginsberg and Hughes in some way even she cannot be precise upon how: ‘we / had something to do with the origins of blues and jazz’[15]. Simultaneously, she makes the ‘origin’ of her original source content – a poem by an African American woman – ‘something’ hidden to be uncovered. This blurring of cultures in form and content means that unlike Hughes and Whitman, the celebrations she sings of her own history has an exaggerated complication to the “master-narrative” by mingling it with others: ‘the mixture of cultures that informs the poem’s imagery and intellectual content makes additional demands upon readers, who must perform imaginative work to put the various associations together’[16].

Ginsberg resists America’s “master-narrative” ‘run by Time magazine’[17]though ironically acknowledging his own place within this[18]. He decides to create his own narrative outside of this. Waggoner disagrees, claiming that Ginsberg is rather trying to have America ‘woken from its slumber’[19]as a ‘society that had been lost’[20]due to this “master-narrative”. Yet there is evident humour in the final line ‘America, I’m putting my queer shoulder to the wheel’[21]through the ironic addition of “queer” to the collocation. This humour belies the idea that this attempts to seriously awaken a society, but rather indicates that he is removing himself from this narrative: ‘he… resists the reality constructed by its narrative altogether… exposing this American reality as an ideological fantasy. He thus puts his “queer” shoulder to the wheel, not as a homosexual integrating himself into the homophobic national community… but as an outsider who refuses to fall for the stories that make up official reality in America’[22]. That this act is written in the present tense ‘putting’ emphasises that this is an active attempt to remove himself, and ‘the whole poem can be interpreted as an active poetic refusal to accept the dominant narrative of the present and future’[23].

Hughes ends instead with a message of expected inclusion in this “master-narrative” of history. Presley argues that the poem leaves us with a sense that for African-Americans, ‘the American dream is merely that – a dream’[24]. However, the present tense assertion that ‘I, too, am America’[25]contradicts this. There is no lived ‘dream’, but the assurance that ‘tomorrow, / I’ll be at the table’[26]suggests there will be equality and with that the chance to live the American Dream. The assurance is furthered through the use of the present tense and the preposition ‘at’ which places the speaker in an active role in contrast to the other prepositions in the poem, which are all ‘to’, making the speaker passive. Moreover, although he is the ‘darker brother’[27]he is still the ‘brother’ of other Americans in this use of synechdoche. The use of ‘darker’ brings a sense of a world that is not divided into binary “black and white” but rather a spectrum. Indeed, the connection from the outset of the poem to I Hear America Singing places this poem within the “master-narrative” of American history.

In contrast, Harjo ends her poem stating that the “master-narrative” of ‘the rumours of our demise’[28]will be destroyed: ‘they die / soon’[29]. This is a much more violent description of the antagonists to her place in history than Hughes. The only end-stopped single word line ‘soon’ highlights this threat of violence through its bluntness. Indeed, through the poem Harjo’s sentences get shorter, bringing a sense of growing speed and menace to the danger posed to the “master-narrative”. Unlike Hughes’ and Ginsberg’s realisations that they “are” America and can choose how to be integrated or not into this “meta-narrative”, Harjo writes that she is ‘still America’[30]. This brings a sense of eternal history hidden in the “labyrinths”, emphasised by the double entrendre of ‘still’ meaning both static and unchanging. Harjo takes control of the “labyrinthine mouths of history” and uses it to destroy any histories that do not adhere to that of the Native Americans: ‘we spit them out’[31].

In conclusion, we see that all of these poets are part of the “labyrinth” of history, but also that they may have ingrained this “labyrinth” to some extent: all three showing a sense of multitudes of self though in different ways. Ginsberg seems conflicted between his critique of America, especially using Hughes, and his connection to the country, Hughes with his “double-consciousness”, and Harjo illustrating a difference between present and past. Furthermore, these poets open the “mouth” of history to sing a celebration of their own narratives of American history, and the connection to musicality in all poems highlights this. However, there is a notable remainder of this “meta-narrative” in the influence of Whitman being felt in these poems too. Ultimately, these poets have different relationships between their “labyrinthine” histories and the “master-narrative”: Ginsberg wants to create his own “master-narrative”, Hughes to be involved within it, and Harjo sees herself as being in a position to re-write the “master-narrative”.