Cloaked in the morning jungle mist, reverberating with the echo of howler monkeys and parrots, are the mighty temples of Chichen Itza. The name Chichen Itza means “at the edge of the well of the Itzaes”, who were an ethnic group of Mayans known as the water sorcerers. In July 2007, this archaeological site was named one of the New 7 Wonders of the World and continues to be one of the top destinations in the Mexican state of Chiapas.

Chichen Itza, founded around the year 435 A.D., has a fascinating history written by the pre-Columbian civilisation of Mayans. The city is thought to have been a religious, military, political, and commercial centre that was home to 35,000 people at its peak. Its rapid decline around 1440 A.D. remains a mystery to modern-day historians.

The site boasts a total of 26 unique Mayan ruins. The pyramid, also known as El Castillo, is undoubtedly the most astonishing of them all. One of the tallest and most remarkable examples of Mayan architecture, it was built during the period of the city’s glory under the Toltec reign. It is a four-sided pyramid, with a carving of a feathered serpent on the top. The serpent is symbolic of Quetzalcóatl, one of the major deities of the ancient Mesoamerican culture. The principal façade of the pyramid has two columns representing serpents with open jaws. These form the main entrance, topped with a large mask of the god of rain, Chaac. Testimony of the amazing advance of the Mayans in architecture and astronomy is the “light and shadow” phenomenon that takes place on the northern staircase of El Castillo during spring and autumnal equinoxes. It is on these two occasions that shadows cast by the setting sun give the appearance of a snake descending down the stairways. 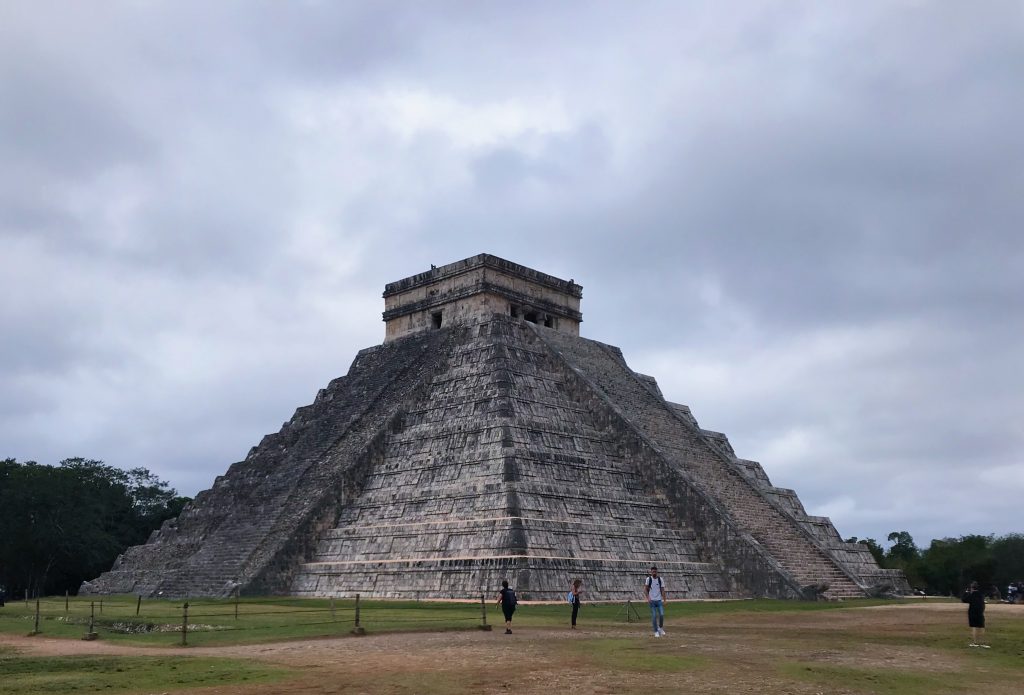 Just to the northwest of the pyramid is the Great Ball Court where the Ball Game characteristic of Mesoamerican societies was played. During the games here, which are thought to have been more a ceremonial ritual rather than a sport players tried to hit a 12-pound (5.4-kilogram) rubber ball through stone scoring hoops set high on the court walls. The sculpted ball court in Chichen Itza is the largest such court in the Americas. Standing on the platform of the temple to the north of the court, it is possible to hear a whisper from 150 feet (46 metres) away.

One of the most picturesque places at the archaeological site is the cenote – a natural well formed in limestone, known for its emerald-green water. As part of the cult offered to the god of water Mayans made ceremonial offerings, throwing many precious objects into the cenote. Later, they introduced the practice of making human sacrifices. The victims were warriors, children and maidens thrown to the bottom of the well along with gold, jade ornaments, and other valuables. Beside the well, one can see the ruins of a building that served as a steam bath, where it is assumed that the victims were purified.

The Mayans were one of the most enigmatic cultures of humanity responsible for advances in mathematics, astronomy, and the arts. We can still catch a glimpse of what life looked like for its members and marvel at the spectacular remains of their civilisation as we wander into the dense jungles of the Yucatan peninsula, Belize and Guatemala. The monuments of Chichen Itza are truly a wonder of our world.